Good Morning! And what a glorious morning it is. A beautiful sun rising in the East, birds chirping a sweet melody, the pleasant aroma of fresh coffee, and the delicious tears of our crushed opponents. Welcome back to the Morning Rehash, Spurs fans.

If you haven't read it yet, check out MatthewTynan's recap of last night's game.

These are the three basic elements of an athlete. But only with technique is it everlasting. Technique is the lynchpin of all great players. It's what made Hall of Famers like Larry Bird and John Stockton elite. It's what elevated Tony Parker from just a quick French dude to an MVP candidate. And It's why Timothy Theodore Duncan is still dominating the competition after 15 long seasons in the NBA.

The nickname says it all - "Mr. Fundamental." A title coined by Shaquille O'Neal that couldn't be closer to the truth. Halfway through his second decade of professional play, Tim Duncan continues to deliver the same high quality production that put four Larry O'Brien trophies in the lobby of the AT&T Center. It's almost Bill Murray's Groundhog's Day with every Spurs game; Tim Duncan drops a double-double, blocks a few shots flat footed, and then gets ready for the next challenger. Yet through all of this we read the tired words and phrases of OLD, NO LONGER, LOST A STEP immediately followed by the "surprised" expressions such as, OF OLD, VINTAGE, TURNING BACK THE CLOCK, and so on and so on. If you pay attention to the numbers though, you'll see that Duncan's game hasn't broken down. "Not surprisingly, Duncan's numbers dipped during the regular season; he averaged 15.4 points and 9.0 rebounds per game," writes SI's Chris Ballard. "However, inspect his production per 36 minutes-starter's minutes. Those figures rise to 19.7 points and 11.5 rebounds. Or almost exactly his career averages." And despite the proof in metrics, we continue to allow ourselves to become pleasantly surprised by his performance. Almost as if it hasn't been around for a while.

Speed and power, unfortunately, are not life constants. They fade with the harsh truth that is aging. It's why athletes who primarily rely on their unique physical gifts generally tend to flame out the quickest. A running joke with Duncan is his lack of a vertical leap, or as Sean Elliott puts it, his inability to "jump over a postage stamp." The truth is, Duncan doesn't need it. Never really has and obviously never will. Despite the fact the man can almost touch the rim standing, Duncan's unique style developed from the ground up - timing, foot movement, body positioning, conditioned decision making. Each tool in Duncan's floor kit has been sharpened a countless number of times over to where each moment on the floor is an instant, and typically successful, reaction. Tim doesn't need to be physically dominate to get the job done. His speed and power comes from his technique. For Duncan, it's not about hitting hard. It's about hitting right.

That's not to say high physical prowess and conditioning doesn't matter. I can't imagine Tim Duncan going into training camp with Eddy Curry's svelte frame. From flipping tractor tires and hill sprints to dropping weight to take strain off the tatty left knee, Duncan has always put in as much dedication to his body as he does the technical stuff. But with age and the always dreaded risk of major career altering injury, the time put into execution is always the most important. Do you think former Spur Antonio McDyess, who suffered a ruptured patellar tendon early in his career, would have lasted as long if he didn't refocus his game to the fundamentals of basketball?

Always a perfectionist, Duncan is meticulous in all matters that generates wins and that includes the pieces around him. Tim spends almost as much time coaching his younger teammates as the coaching staff does. The empowerment and development of the Spurs' youth has aided greatly in his continued success, but still to me there is no "Duncan of old." He hasn't "lost a step" - he's just adjusted it to better fit his body and, more importantly to him, the team. So Mr. Fundamental will just continue to roll on - banking a shot here, tallying a rejection there - until the chassis just can't keep up with the motor between the ears. Or as Timmy puts it - "Till the wheels fall off."

Chip Engelland spends a lot of time with Kawhi Leonard. There is a very strong focus on free throws but also quite of bit of verbal coaching.

Chip obviously enjoys working with Blair but it's a shame DeJuan couldn't put in more of an effort last night. He looked disinterested, tossed up some extremely wild shots, and goofed around with a few dunks. I wonder where his head is. I thought DeJuan would have received more playing time since he tends to play Griffin very well but because Diaw has been such a positive asset, it's made Blair almost irrelevant. It's my opinion he is on his way out this offseason.

James Anderson's work pre-game focuses on cutting to the basket. Not much work beyond that. Maybe he should practice on intentional fouling too.

Gary Neal just couldn't miss from deep but anything between the arc and the basket continuously hit back rim. Neal was 3-6 FG (1-2 3PT) for 7 points last night.

Obviously I feel very fortunate that he's allows us to do it... and I feel very guilty for doing it because he does have the stature he has. It's almost embarrassing to go to him and say 'You're gonna do this.'

Pop on Manu's willingness to accept a role of the bench.

Dinner: Lasagna, rigatoni with sausage, and steamed broccoli. No gin in sight - tea had to do.

National Broadcast Note: There are more ESPN personnel around the floor than players. Ric Bucher interviewed Popovich later during the game. I didn't see/read the interview but it looked like the typical Pop interview..

Crowd Gimmick: Those mini-tennis racket things with the ball on each side... they've always been terrible. Pillow fight makes more noise. The Spurs need to pull off a crowd stunt like this...

In Attendance: Goldstein, of course. Coach Stan Albeck was recognized during the break. It was Coach Albeck's birthday as well. Note: I have yet to see Coach Albeck NOT at a Spurs game.

Show of Force: Fans weren't nearly as loud this time around but place was jumping. I think they know this thing is almost a lock. 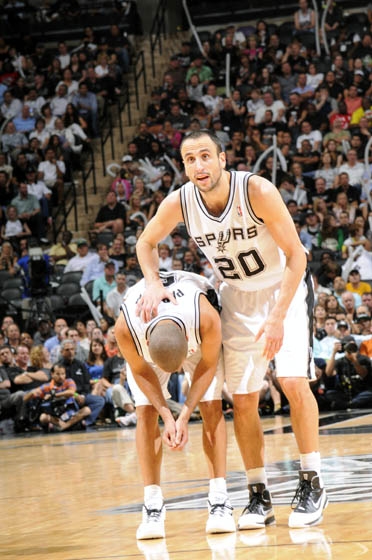 Birthday shots prior to Thursday's games might not have been the best choice.

Game Two's start was nearly a carbon copy of Game One's - Spurs get an early jump by feasting in the paint and forcing five Clippers turnovers. And like Game One, Los Angeles managed to tighten the defensive clamps in the second quarter. But unless you count Chris Paul's horrific performance, another high number of Clipper turnovers, and Los Angeles' inability to stick with what an offensive game plan - that's where the similarities ends.

In the first six minutes of the second half, San Antonio thumped the Clipps by taking advantage of the boards and evenly attacking the defense to the tune of a 19-7 scoring advantage. The Spurs were moving the rock with ease, finding the open man, effectively forcing L.A. to call a timeout to regain their composure. Although the Clippers closed out the quarter with a decent run, San Antonio entered the fourth quarter with a double-digit advantage which essentially sealed the Clipper's fate. Including the playoffs, San Antonio is an insane 54-3 when leading after the third quarter (33-1 at home).

By the mid-fourth quarter, you could tell Los Angeles was both physically and mentally spent. Defenders remained flat-footed on defense, rotated late on screens, and passes were getting weaker and more off-target. On a late Clippers' possession, Paul started throwing a fit because his players weren't moving on the called play. This won't get as much play as the Wade-Spoelstra spat but I'm convinced that I saw Blake Griffin snap at Vinny Del Negro after a Clippers' foul call. I think Coach Del Negro was just trying to prevent Griffin from picking up a technical.

Unless Los Angeles comes out breathing fire and finally finding a way to score in the paint (30 in game one and only 18 in game 2), San Antonio will continue their dominance in this series at the Staples Center. Something else to keep an eye on is Blake Griffin's knee. Blake re-aggravated his knee on a fast break attempt late in the fourth quarter. Even though Griffin has largely been ineffective in this series, the Clippers need him to look deep to help revive their athletic advantage inside. 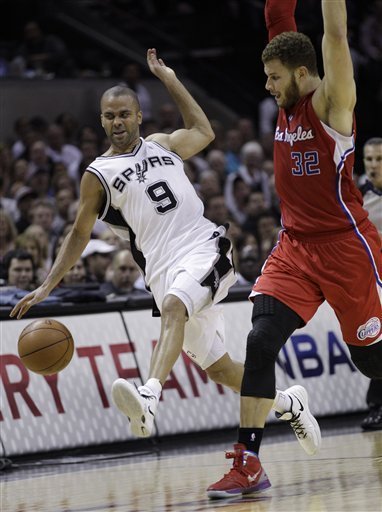 Any photo of Parker and Griffin within three feet of each other is guaranteed to look silly.

...in the third quarter. Tony Parker scored 8 (doubling his game total), Danny Green nailed 3-4 from deep, and the Spurs finally took control off the boards (9-5 in the quarter).

It was hard for me not to pick Tim Duncan again but Diaw was just all over the place for the Spurs. The production from Boris has made DeJuan Blair irrelevant.

This wasn't hard at all - a career high in turnovers (8) and a 10 point, 4-9 shooting performance which included a 24 minute gap between his first and second basket.

Clipptastrophe. 18 turnovers, Blake re-tweaks his knee, and the Clippers fall into a 0-2 hole against a machine of death.

@Suga_Shane: LeBron should demand a trade to the Spurs. As should every ringless super star.

@YourManDevine Wouldn't you be? RT @bigpumpkin4real: Ric Bucher is so frightened of Pop 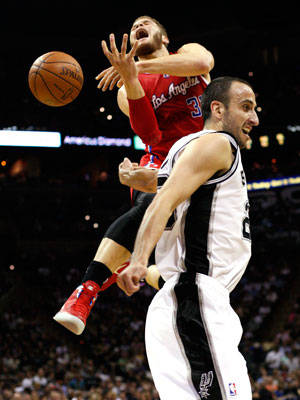 While at Oklahoma, Blake majored in Drama with a focus on "Operatic Tragedy."

Start strong again. The Clippers are going to be desperate and at home with a hungry Clippers fanbase (possibly - I don't give LA much credit on anything). Keep attacking with Parker and keep feeding Timmy in the left block. The Clippers will need Chris Paul and the bench to be on fire to stay alive. I think Blake will be 50% for game 3. This is not the arrogant and care-free Memphis Grizzlies and the Clippers know that. There is no miraculous come back against a team at the level of the San Antonio Spurs.

Hopefully my next post will Game 1 of the Western Conference Final! If not, I'll see you Wednesday morning for the Game 5 Morning ReHash.