There's already an understanding of the method to Gregg Popovich's madness; it's seeing the results of said "insanity" that ties all the pieces together like a nice Persian rug on the hardwood. All those nights Tim Duncan, Manu Ginobili and Tony Parker sat in street clothes next to their fearless leader, all those mornings after when incredulous critics couldn't grasp the idea of their team's coach being so seemingly careless with the West's top seed by sitting his stars, this is where we start to see the end for which the means were intended. The second round of the playoffs began last night, and despite this being a Los Angeles team few are accustomed to seeing at this point of the season, there's nothing different about the time of year. The playoffs are still the playoffs. Jimmy Goldstein is still Jimmy Goldstein. And Tim Duncan? Well, he was vintage Timmy.

The 36-year-old veteran put in 26 points and 10 rebounds against the youthful, but overmatched, Clipper front line, and the San Antonio Spurs shook off eight days of rust to roll Los Angeles 108-92 and take a 1-0 series lead. It wasn't the warmest of welcomes for the visiting Clippers - who are in the second round of the playoffs for only the second time in franchise history - but it was perhaps appropriate. There is an undoubted youth movement in this league, but the old guard, the one still led by Duncan and Popovich, isn't quite ready for the change.

"Tim was solid as usual. He's played like that all year long," Popovich said about his security blanket of 15 years. "He's not going to do anything that's going to be a highlight film for TV, but highlight film for coaches, possibly. Just being solid, making a great pass, playing the defense that he did, rebounding; he's the anchor."

And it's been that simple since 1997, when the two forged the relationship that still exists today. Through the doors has come player after player, assistant after assistant, fan after fan, but Duncan has always remained that steady force. And in this game, after a somewhat sloppy first half, it was once again Duncan and Ginobili that righted the ship as they've done for years.

The Spurs have been machine-like over the past month, if not all season. And while it wasn't the typically efficient game this team has made a habit of playing, it got the job done. All machines go cold without consistent use, anyway. For San Antonio, the first half was just the grease needed to get it humming again. The Spurs outscored the Clippers 30-23 in the third quarter behind 17 points from Duncan and Ginobili combined (Manu scored 22 points total) and stretched an eight-point halftime lead to 15, 87-72, heading into the final frame. Despite a Clipper comeback bid that featured a 10-0 Los Angeles run early in the fourth, San Antonio was too much to overcome after pushing the lead out to 18 points to start the quarter.

"It was good. They made a run right back at us, though," Duncan said of his team's third-quarter run and the Clippers' comeback attempt. "They played well, they never gave up, they shot the ball there and got themselves back into it. It was great to close it out the way we did but we knew, defensively, we had to do a better job. That's what kind of keyed our run."

While the defense continued its underrated strong play last night, it was the team's shooting from deep that changed the complexion of this game and propelled San Antonio to its fifteenth consecutive win. If rust was to be felt in one area in particular, one would think it would be in the shooting department, an area of the game very dependent on rhythm. But the Spurs hit 13 three-pointers last night, tying a playoff franchise record last recorded on May 22, 2007, against the Utah Jazz.

"We know they're going to be very physical, we know they're going to pack it into the lane and (Parker) did a great job of kind of getting in there and drawing people in and finding shooters, and obviously our guys shot the ball well," Duncan said. "That's the way we want to play the game. That's the way we want to move the ball. We want to share the ball and we have some very good shooters."

While Parker did a good job of getting in the lane and finding open shooters, his own jumper wasn't falling. TP scored just seven points on 1-for-9 shooting and had a difficult time getting his own offense going with the always pesky Chris Paul in his hip pocket all night. But the old story continues to re-tell itself. Even when a member of the Big 3 isn't clicking along at the usual pace, this team's depth is extraordinary. 20-year-old rookie Kawhi Leonard and young journeyman Danny Green are proving to be much more than regular-season contributors. There's always a concern that the bright lights of the postseason might be too much to handle for young players on teams with championship aspirations, but the limelight only seems to be nurturing these two. Leonard and Green scored 16 and 15 points, respectively, and once again made huge contributions on the defensive end to help push their team to the win. Their blend of size and athleticism was something sorely needed on last year's Spurs team that was bounced in the opening round, and the two swingmen have proven to be the remedy for what ailed San Antonio. 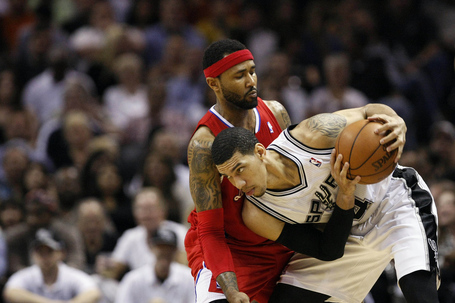 Green and Leonard remain composed even in the brightest light's glare.

While Green acknowledged the importance of what he and Leonard bring to the table, he said the two know their roles and exactly where to fall in line.

"We just come in with a lot of energy and, you know, follow Tony and Timmy's lead. And then Manu comes off the bench and he does his thing," Green said. "We're a pretty deep team and I think it helps that we have guys rotating out, staying fresh and we're able to have that energy."

And therein lies the luxury the Spurs possess. It's not often you see this type of blend of youth and experience on a team whose ultimate goal is nothing less than a River Walk parade. And watching the two dynamics - the two elements of young and old that depend so much on one another - evolve has become a must-watch for the true basketball fan. What this team does isn't flashy or cocky, nor does it necessarily lend itself to a product popular for television consumption. But that's always the way it's been in San Antonio.

So here the Spurs are again, one step closer to their ultimate goal nearly 13 years after Duncan and Pop got their first ring. While Father Time has had its impact on one of the game's greatest players, it appears it hasn't quite been enough to expedite the widely expected ushering out of one of the league's most successful franchises over the last 15 years. There are very few flashy dunks (in fact there were as many missed dunks as made dunks by the Spurs in this one) or highlight alley-oops, but this team is once again on the championship trail as summer approaches. And there's plenty of gas left in the tank.

- Boris Diaw had one of, if not the best game of his brief Spurs career. While he did not shoot the ball particularly well (just 3-for-9 from the floor), he led the team in rebounding (12) and was second in assists (5). His spacing was great, he never really looked lost or out of place and he seemed to have a real comfort level on the floor. Amazing what a week of practice can do.

- Eric Bledsoe continued his strong play against the Spurs. The second-year guard had 23 points to lead the Clippers, as well as five rebounds, four assists, three steals and a blocked shot. He's a tough matchup for the second-unit backcourt of San Antonio and has been a real problem for any ball-handler not named Parker or Ginobili.

- The Spurs pretty well dominated the glass 47-34 against a team with a strong front line. The team's last loss on April 11 that featured the 60-33 rebounding deficit sure does feel like a long time ago. Well, maybe that's because it kind of is. The point being: San Antonio is really rebounding the ball well right now, especially, as usual, on the defensive side of things. The 11 offensive boards and 17 second-chance points weren't bad, either.