Welcome to the first of hopefully many home playoff Morning Rehash segments, a supplemental post covering notes, quotes, and personal observations from pre-game to post-game. I'll also fill you in on some of my own experiences because that's what the people really want, right? Right.

Cicero once said "rashness belongs to the youth" and "prudence to old age."

A contradictory string of words that seem ill-fit for a Spurs unit that has blistered the NBA scoring statistics all year but yet still well rooted in the mindset of the team. While some viewed and treated the 66 games in 123-124 days season as a sprint, the Spurs worked relentlessly at mitigating the stress. With the injury-plagued Spring of 2011 still fresh in their minds, San Antonio committed to the development of team depth from the start. If the team couldn't rely on players outside the Big Three, Coach Popovich knew the season would both be painful and short lived. And while some would argue gambling on the development of so many unknowns to be risky, it was the safest bet Pop could make.
Now lauded as possibly their deepest squad ever, the San Antonio Spurs are steamrolling to their goal of a fifth title. With the game one victory over the Clippers, the Spurs are now 43-7 since their much referenced overtime loss to the Dallas Mavericks. An impressive streak featuring two forfeited 11-game winning streaks and still-kicking 15 game rampage, something that past Spurs' teams would be proud of (even though they wouldn't acknowledge it). But unlike the title teams of old, this squad thrives on a high-octane offense rather than an über defense.
The Spurs finished the regular season second in the league in both team scoring (103.7 PPG) and point differential (+7.2). Five games into the playoffs, those numbers are sitting at 102.3 and +16.0 respectively. But the Spurs aren't just running up and down the floor shooting wildly a la 2010 Phoenix Suns. It's still the same methodical approach that the defensive juggernauts of the Naughts applied day in, day out.
Hold tight and steady. Lock in. Exhale. Squeeeeze the trigger.

Good Lord, the Spurs are systematic. Spurs players arrived on the court every five minutes to get their last workout in. Danny Green and Gary Neal at 6:45. Parker at 6:50 and Duncan at 6:55. Coach Vaughn worked solely with Neal on pull-up jumper and quick release 3-pointers. Danny planted himself in the corner hitting jumpers and driving base. The mid-range game was Parker's focus while Duncan went through his usual routine of test firing each weapon in his arsenal. By the time 7:00 hit, Green and Neal were walking of the court as Patty Mills started warming up.

On the other side of the court, a handful of Clippers were casually shooting the ball at different spots while Reggie Evans put some moderate work in at the post. Evans was one of the first ones out and was really the only one left when I went back to media room sometime after 7:00 PM. This wasn't laziness or disorganization on the part of Los Angeles. The Clippers put in some light, structured work early but only enough to get the bodies and minds fired up. Del Negro had no interest in sapping any more strength from an already weary Clippers team.

It made it tougher on the assistants than it did on me. They did most of the work. I just call the timeouts.

- Pop on if the prolonged Clippers/Grizzlies series made game planning tougher.

National Broadcast Note: TNT's presence around the court was practically non-existent; Unlike ESPN, who would iron brand the fan's foreheads if they could.

Crowd Gimmick: "It's Electrifying!" team signs/noisemakers. The fans' voices were much louder than these things.

Show of Force: Spurs' fans must have been anxious for a game because the AT&T was completely full before tipoff.

Spurs fans are by far the most engaged fans in basketball, from opening tip to final buzzer.

National Anthem: Lady with a good voice but operating at 2/5 speed. My legs fell asleep. 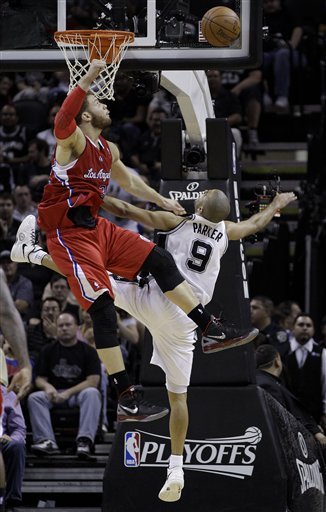 Flailingest flailers who ever flailed.
(via AP Photo - Eric Gay)

Early national posts are running with the general line of "what rust?" - As if the Spurs went out there and manhandled the mangled and exhausted Clippers to the same tune the Oklahoma City Thunder belted out Monday night. Maybe I'm a cynic (yes) or maybe I'm just used to the ruthless T-1000-esque efficiency of the San Antonio offense but last night's game was closer to an anomaly than the proposed "business as usual" recap.

Throughout most of the game, the Los Angeles big men continuously jumped the Spurs pick-and-roll while breaking off at just the right time to effectively clog both the driving lanes and the passing lanes inside. Although Tony Parker finished the night with 11 assists, his 1-9 scoring performance highlights the lack of looks and the amount of pressure the Clippers defense put on him. The Clippers also did an admirable job on transition defense off turnovers and rebounds, limiting Parker and the Spurs in their ability to run the court (9 fast break points). While not known as great defensive unit, Los Angeles' tenacity on pressuring the ball forced San Antonio into their highest turnover total (18) since April 14th against Phoenix (24). The result was a +6 advantage on points off turnovers and 17 fast break points.

Struggling to keep any momentum, the Spurs fell back on an oldie but goodie mid-way through the second quarter: Give the ball to Duncan and clear out. Leveraged by the clear matchup advantages against the Clippers' big men and LA's dedication to shutting down the Spurs' one-spot, Duncan pounded out a game high 26 points accompanied by 10 rebounds and a pair off "get off my lawn" blocks. This advantage down low and the Spurs focus on the boards (+13) helped mitigate the damage of the turnover battle. Rookie Kawhi Leonard and Boris Diaw provided a boon on the offensive glass, together grabbing 8 of the Spurs 11 offensive rebounds and helping fuel a decisive 17-6 advantage on 2nd chance points.

The Clippers were unable to find such a rock to cling on to. Aside from an admirable scoring performance from Eric Bledsoe, Los Angeles had no means of replacing the missing production from both Chris Paul and Blake Griffin. On offense, Paul faded from attacking the bigs to slowly passing out of setting up one-on-one matchups with Tim Duncan (3rd quarter). Its acts like this that lead people to question Paul's decision making in crucial times. Despite his poor shot percentage, Paul should have no way differed the scoring option to a Blake face J. I don't know about you, but I'd take a contested Tony Parker floater over an open DeJuan Blair midrange jumper any day of the year. 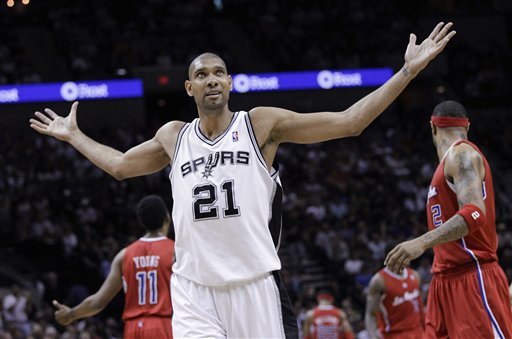 This Game Was Over When...

When the Clippers tried re-igniting their inside offense in the late third quarter with Blake Griffin post-ups. While Blake was struggling to get past Boris Diaw, the Spurs ball movement had returned to late season form. Duncan was anywhere and everywhere, pushing the Spurs lead to 15 by the end of the quarter.

When the high pick-n-roll wasn't working and Tony couldn't get into to the paint, the Spurs dialed up #21 to take over the game. When in the game, Duncan stabilized an erratic offense and kept the Spurs on top.

The maestro of the Lob City Orchestra failed to get any consistent offense and too often contributed to the Clippers poor decision making with passes and shoot selection. Sure, he had 10 dimes and a handful of steals but Paul failed to take control of numerous scoring opportunities. His abstinence from taking advantage of match-ups late in the game help earned him this award.

Rust-astic. Looking good while throwing every ball to the wrong colored jersey.

@LeighEllis: Boris Diaw is just too athletic for Blake Griffin.

@netw3rk: The Spurs are a basketball team for hardcore basketball fans. That's really what I'm saying. They're like Fugazi.

@FredrickThuglas: Tim Duncan is going to body the clippers in the 2nd half, then drive home in his hybrid & enjoy a cold glass of milk & a John Grisham Novel.

@DukeOfBexar: #Clippers O looks better with Blake on the bench. Outside of a few easy dunks, he has been very ineffective in the offense. 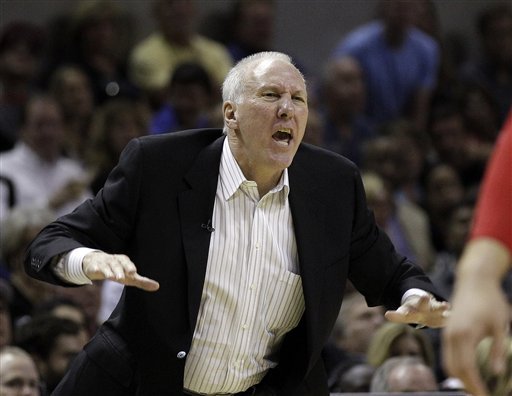 Apply patience to the passing game to counter the press defense while maintaining dominance on the defensive boards. Shot distribution, both assists and spots on the floor, will be important as well. Keeping the offense balanced in and out will help limit the effectiveness of the hyper Clippers defense as well as their offense. While it was great the Spurs knocked down 13 shots from deep, Lob City is not a team you want to get into a race with off of long bounces. Despite the injuries, San Antonio witnessed Los Angeles' willingness and ability to run the floor.

If not for the spanking-worthy mistakes made by the backcourt, the Spurs might have been able to knock out a 20+ point victory over a tired and injury riddled Clippers team. I say this even despite the lack of production from Parker. San Antonio is just too deep and too steady for Los Angeles. Originally, I thought this series over in five but I'm now leaning more towards a Spurs sweep.