Here is the backstory, for those who missed the introduction to the first battles, the resolution of Heat/Knicks & Pacers/Magic, the conclusion of Thunder/Mavericks &Spurs/Jazz.

The machine that got them this far is something of a mystery. These meddling kids have somehow discovered a secret entrance to the Playoffs, but what will happen if that scary monster isn't just Old Man Withers in a rubber mask?

The strength of the team is not the individual soldier, but the discipline of the whole. They can survive anything - even the loss of key players - if they keep their shields locked together ... but if you can shake apart that wall, what remains will crumble.

IN THE SECOND INSTALLMENT OF... 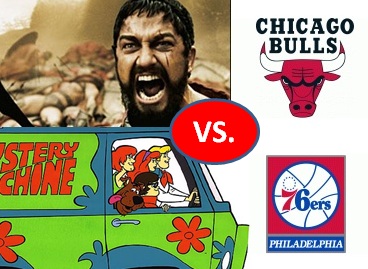 Slowly, deliberately, Leonidas approached the five cowering figures. There had been no battle - the contest had been decided before it had begun. The king of Sparta drew back the arm that held his spear ... then paused. Instead of striking, he weighed the weapon in his hand.

"Do you know what this is?" the mighty warrior asked his quivering prey. "You! Speak!"

The gangly hobo in the green shirt whimpered, arms raised to shield his face. "Like ... like, I don't know, man. A spear?"

"Wrong," thundered the bearded patriarch. "This ... is a Spartan spear!"

A cheer burst from the soldiers, whose own spears formed a serried ring around their captives. The hippie stereotype promptly swooned, and the blond in the ascot appeared close to following suit. The redhead stared blankly into the middle distance, while the bespectacled brunette stroked the jowls of the monstrous Great Dane. "Psst. Shaggy," she whispered. "You carrying? I think Scooby is starting to come down."

The soldiers responded on cue. "Balanced!"

"It is balanced," declared the king, "like a society that treats agriculture, commerce, and anything else other than dying in battle with abject contempt!"

"It is strong," the king continued, "like a population of only a few thousand that is too consumed with its own purity to interbreed with outsiders, and which coincidentally has a special cliff just for punting mutant babies!"

"It is straight," bellowed the king, "like three hundred guys in leather hot pants who split their time between doing crunches and obsessing about their masculinity!"

As Leonidas spoke, the brunette rifled frantically through the pockets of the unconscious hippie. The Great Dane had begun to twitch, and now sat abruptly upright. "Shcooby shnacks?" it asked.

"There is no spear like a Spartan spear!" concluded the king. "There is no weapon to match it! It has killed princes! It has slain gods! You, craven worms that you are, are hardly worthy of so fine a death! But see, how Sparta is generous! Prepare to receive this incomparable shaft!"

The redhead glared sidelong at the blond prisoner, who bristled with indignation. "What? I didn't say anything!" Then the brunette interrupted the spat, whispering something that caused the others to glance hurriedly at their canine companion. Then, in unison, they flung themselves to the ground just as the Great Dane - its eyes now wide and dilated, thick ropes of slaver dripping from its maw - stood erect on its hind legs. It stared madly into the face of Leonidas.

What happened over the next few minutes convinced the forthcoming generation of Spartans to become vegetarian pacifists, and inspired the thrash-metal hit ‘Blood Sausage in a Lawn Mower'.

The green-shirted scruff regained consciousness just as the last of the screams ended in a moist gurgle. "Like, what happened?" His faithful hound-demon, evidently pacified, trotted over and dropped a present in his lap. "I was having, like, the craziest dream. We were looking for this trophy, and then we were in East Lansing, and ... is this a kneecap?"

The Los Angeles Lakers as The Corleone Family

The old Don used to run this town. Now, people say that the family has lost its guts, and that the Corleones are not the force they once were. It's not personal, it's just business ... but it's personal. Also, this allows everyone to make all the "put a hit on" jokes they want.

The Denver Nuggets as Pokemon

Denver has collected a diverse assortment of players with interesting and unique skills ... but have they evolved enough to battle elite teams?

IN CHAPTER TWO OF... 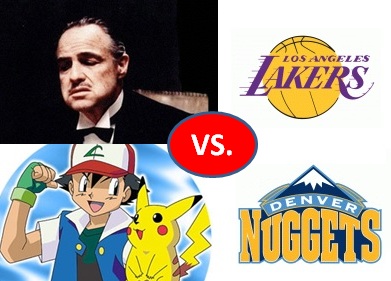 The old Don stood as Brasi entered the room. The big man's face was a mass of purple bruises, and he could not suppress a groan of agony when he bent to kiss the Godfather's ring.

"Luca. Luca, what happened?" Don Corleone laid a paternal hand upon his enforcer's shoulder, then withdrew it when he saw Luca Brasi wince. "The first round of the tournament was today. Please, sit. Tell me, tell me what happened."

Slowly Brasi lowered himself into a chair. "Don Corleone, I am honored and grateful that you have invited me to represent the family in the Pokemon tournament, and I am glad to say that we have won the first round. Here you will find a report of the goings on that went on."

Brasi extended a folded sheet of paper. As Don Corleone took it the big man was wracked with a coughing fit; the Don busied himself with the note, pretending not to notice the thin trickle of blood that Brasi hastily dabbed from the corner of his mouth.

Quietly the old Don tucked the note into his pocket. "You are a loyal soldier, Luca," he said at last. "You have served the family well. Still, I am deeply troubled. We must-"

The door slammed open, and Sonny burst into the room. "Pop!" His face was flush with excitement as he waved a newspaper. "We did it! It's all over the TV too, the trophy is as good as ours!"