Playoff Preview Round 2: The Princess Spur

Share All sharing options for: Playoff Preview Round 2: The Princess Spur

Long ago, on a farm in the land of SanAnflorin, lived a young post player named of Tiagocup. Tiagocup had a low block game admired by many of the GMs in the land, but had yet to realize her power over the adjacent farms. Tiagocup was content to just play hoops and order around the ball boy, Manuley. Manuley would take Tiagocup's commands in stride, always replying with "As you wish." Soon, Tiagocup realized that Manuley was in love with her post game and found herself reciprocating with a love of his reckless abandon. To ensure that their basketball game could withstand attacks from the country of Californder, Manuley left the comfort of the farm in search of gaining more knowledge from basketball players abroad. 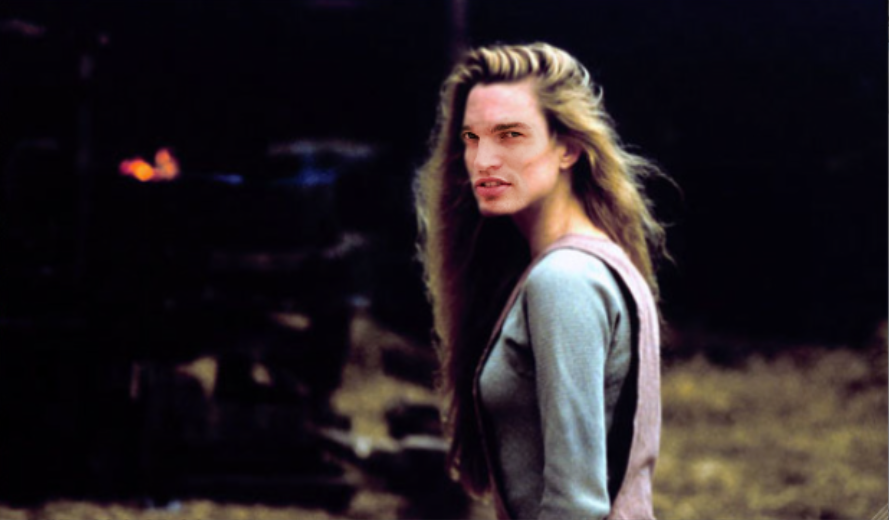 But alas, soon after Manuley left, Tiagocup heard alarming news that Manuley had fallen at the hand of the Dread Pirate Stern. Bereft from the loss of her basketball love, Tiagocup refused to engage with the surrounding farms. Yet her basketball prowess had not escaped the notice of the evil Count Sterlingen. The Count coveted Tiagocup's size and wanted her for himself and enlisted Prince Griffindinck into his scheme. The Prince, who only wanted an excuse to wage war against his rivals in Californder in pursuit of a ring, agreed to marry Tiagocup with his team. The Count and the Prince ploted to enrage the fanbase by faking the assassination of Tiagocup's post game with bench players in the purple and gold colors of Californder. 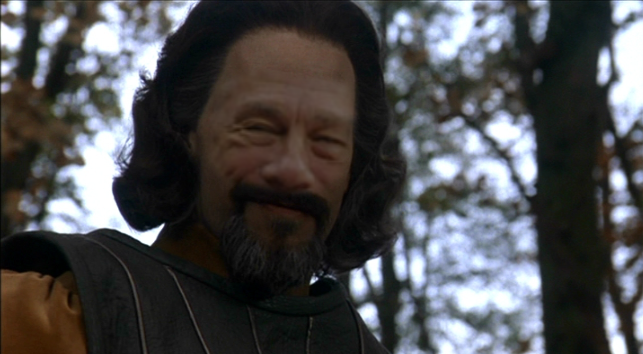 PtR: [interrupting] Hold it, hold it. What is this? Are you trying to trick me? Where's the basketball? [suspiciously] Is this chick-lit?
GrandPop : Wait, just wait.
PtR : Well, when does it get good?
GrandPop : Keep your shirt on, and let me read.
Unaware of the behind-the-scenes machinations of the Count, Tiagocup agreed to appear in a press conference before the public. While answering questions from the media, Tiagocup was suddenly bombarded with booing from the back row - a blonde haired hag from Miami of the name, Israel Guitierrez. 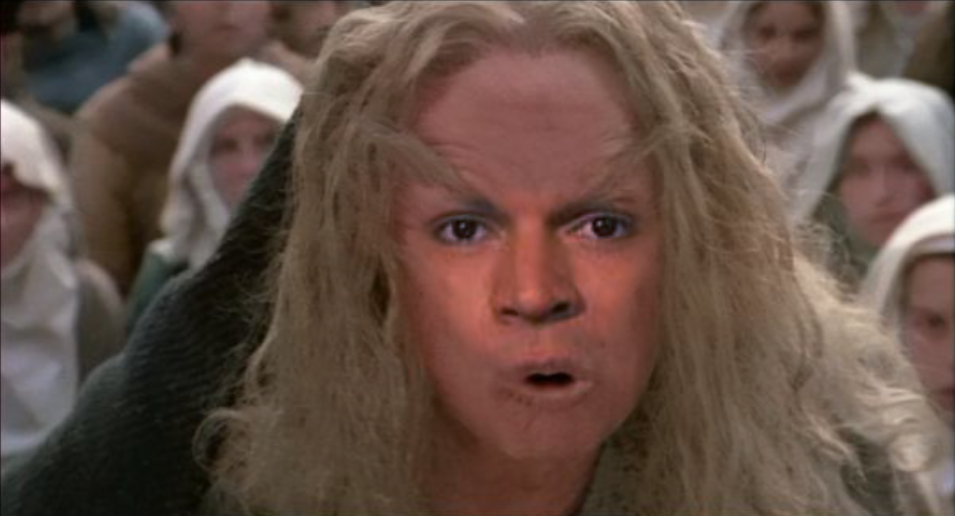 At the advent of the playoffs, the Count contracted with the villain Chrizzini to kidnap Tiagocup, with the anticipation that her absence will be blamed on the Californderians. Chrizzini, who envisioned himself the smartest Clipperian in the land, knew he would not be able to kidnap Tiagocup on his own and, therefore hired the giant Timzik and the French swordsman Tonigo to help. Having not worked for well over a week, Timzik and Tonigo were just happy at the prospects of playing again - little did they know of the dangers lurking ahead! Chrizzini ushered the group upon his native ship, with the Cliffs of Linsanity his goal. As the Clipper sailed through the Giant EeLa Bay, TImzek and Tonigo amused themselves with clever word games:
Tonigo: That Chrizzini, he can flop.
Timzik: Flop, flop... I think he make fans' heads pop.
Tonigo: Probably he wants playoff wins.
Fimzik: He's really very short on them.
Tonigo: Timzek, are there blocks ahead?
Timzek: If there are, our shots will be dead.
Chrizzini: No more rhymes now, I mean it.
Timzik: Anybody want a peanut? 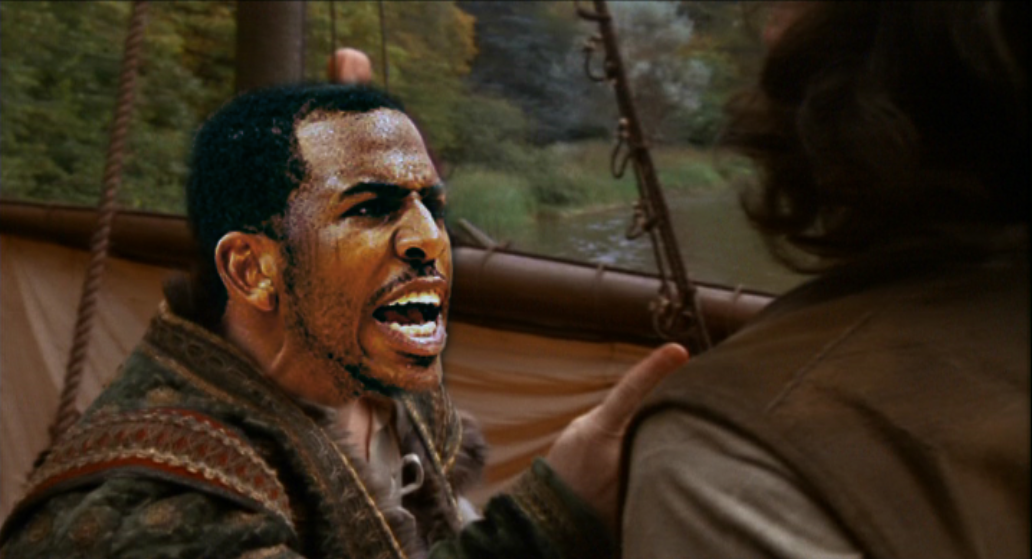 Chris Paul as Chrizzini: So smart? So tricky? We'll see who's laughing last.

As the Clipper ship approached the Cliffs of Linsanity, Tonigo noticed a ship following with highly erratic movements - Chrizzini was not concerned as he deemed it inconceivable that anyone could be as skilled as he. At the base of the Cliffs, Chrizzini instructed Timzik to carry the entire group up the cliff face. Used to carrying a team on his broad shoulders, the quiet giant started the vertical climb. Much to Chrizzini's chagrin, the highly erratic ship also docked at the base of the cliffs - a man clad in black appeared. Chrizzini urged the gentle giant to the top of the cliff, where Tonigo waited to face the Man in Black. 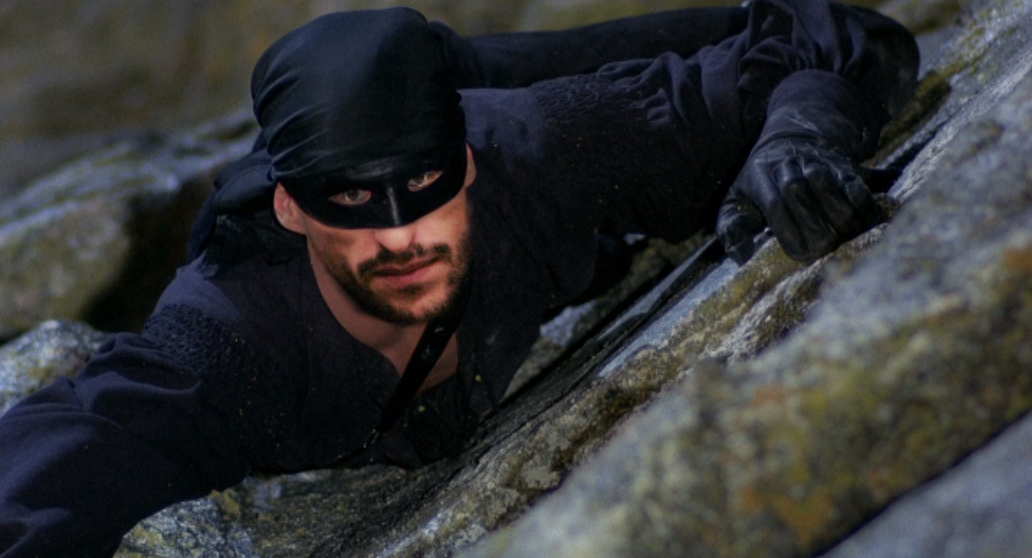 Manu Ginobili as the Man in Black: It is love that drives him on. Love of the game, love of winning, a love for which he will joyously sacrifice his body. He is the X-factor that can topple any mighty power, because when he shows up - even injured, even weakened - he is capable of things that are the stuff of fairy tales. 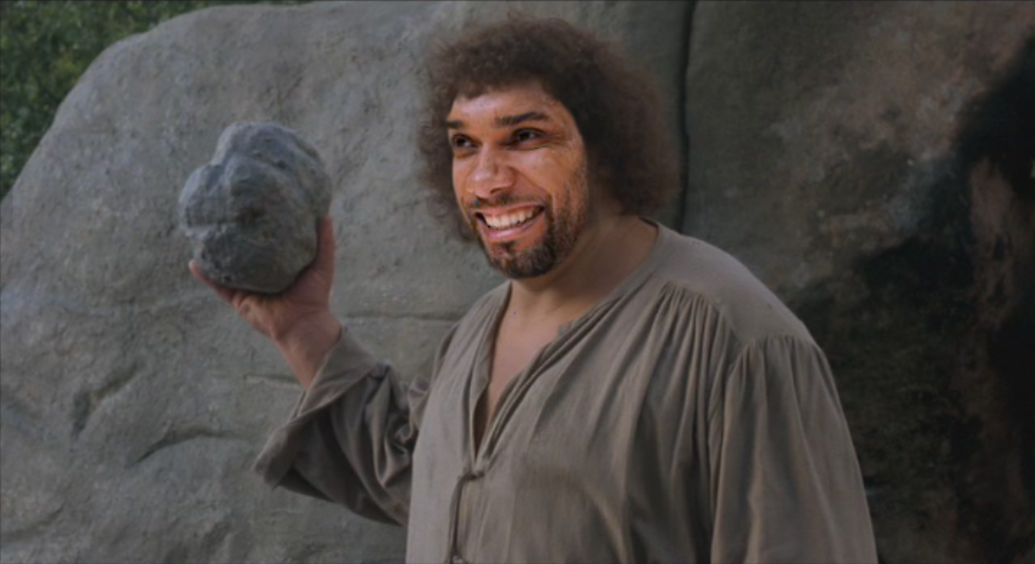 Tim Duncan as Timzik: how many times had the big man carried the team on his broad shoulders? Always affable, something of a joker, but deadly when he has the rock in his hands.

The Man in Black caught up with Chrizzini and Tiagocup. Chrizzini, proposed a chess match of BBIQ proportions. After an epic battle, the Man in Black won by whipping a pass that no other man could have made - Chrizzini fainted in disbelief. The Man in Black grabbed Tiagocup and entered the SaltLake Swamp to escape the captors. While traversing the SaltLake Swamp, Tiagocup discivers that the Man in Black is none other than Manuley returned from his travels. (Note: The SaltLake Swamp is not that bad. You may not want to build a summer home there, but the mountains are quite lovely.) However, on the other side of the Swamp, Prince Griffindinck and Count Sterlingen were waiting to recapture Tiagocup for their own team.
Back at the Staples Center, Prince Griffindinck and Count Sterlingen plotted to prevent Tiagocup from rejoining her farm. Unbeknownst to Tiagocup, the Count restrained Manuley, tormenting him with slum housing. Timzik and Tonigo heard his wails in sorrow of discrimination against the working class, and the two friends searched for the elusive Man in Black. They ran across the K-Bino, who has nursed Manuley back to health for future torture, only to be humiliated by the strength of Timzik. Tonigo and Timzik rescued Manuley from the Zoo of Bad Offense and hauled his limp body to the local miracle man. 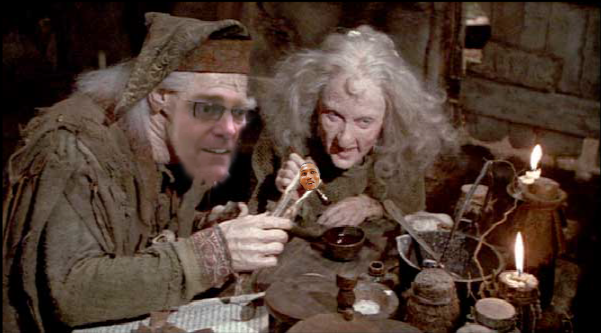 Miracle RC hemmed and hawed, expounding on the greatness of a Big Three sandwich, but after realizing the true love Manuley has for the game of basketball, the miracle man agreed to ensure that Prince Griffindinck would suffer humiliations galore. RC and PATFO conjured up a miracle pill with a special French ingrediant, Borisdiawium. As Tonigo and Timzik left the hut, Miracle RC wished them luck in storming the Staples Castle.
As the two carted Manuley into the upper deck, they surveyed the masses below, trying to determine the best plan of attack. Surprisingly, the Diaw worked quickly, reviving Manuley with its pinpoint passing. As the threesome concocted a plan of attack, the Chief Enforcer, VDN, tried to rally the troops at his disposal. Little did VDN know that Timzik also had a Jackson cloak to help scatter the defense at the gate. Poor VDN - his only choice was to surrender the gate key press pass, and scurry away. 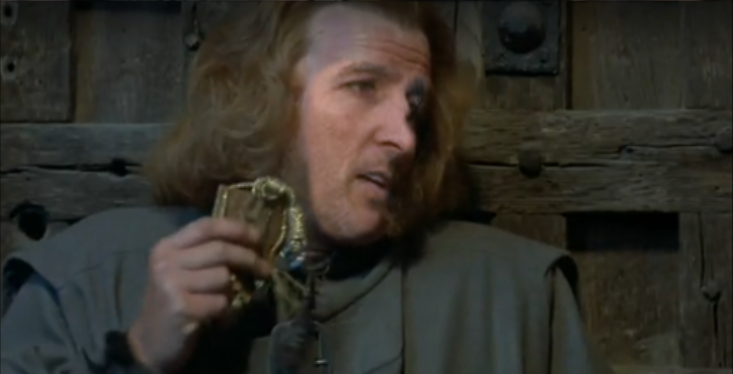 "Oh, you mean this press pass."
Meanwhile, in the Staples Center, Prince Griffindinck decided that the best way to distract the fans from the racket outside the gate would be to wed the beauty of Tiagocup's game to his personal team. The Prince invoked his aged friend, the Impressive Billups, to officiate over the ceremony. The revered clergyman rambled on and on about the true love of basketball, failing to understand that the Prince no longer cared for such things. When the Impressive Billups finally finished the ceremony (while skipping over a few of the more important parts - like actual playoff wins), Prince Griffindinck marched Tiagocup back to her rooms, intent on starting his journey toward a ring by killing her career. 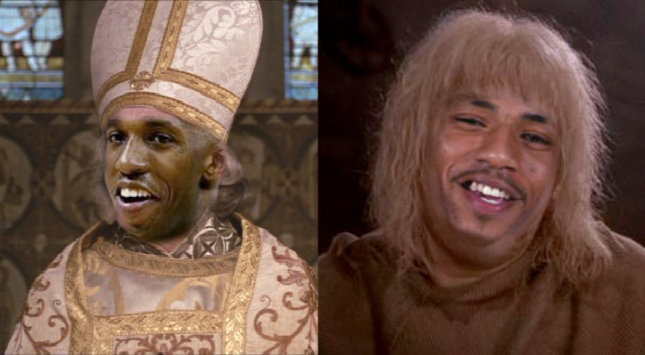 Chauncey Billups as the Impressive Billups, and Kenyon Martin as the K-Bino

While the Impressive Billups talked, the three friends made their way into Staples Castle. Tonigo found Sterlingen, and chased the dastardly Count through the bowels of the castle, continually repeating "Je m'apelle Tony Parker. Vous avez tué mon père. Préparez-vous à mourir." before finally dispatching him with a particularly nasty crossover. 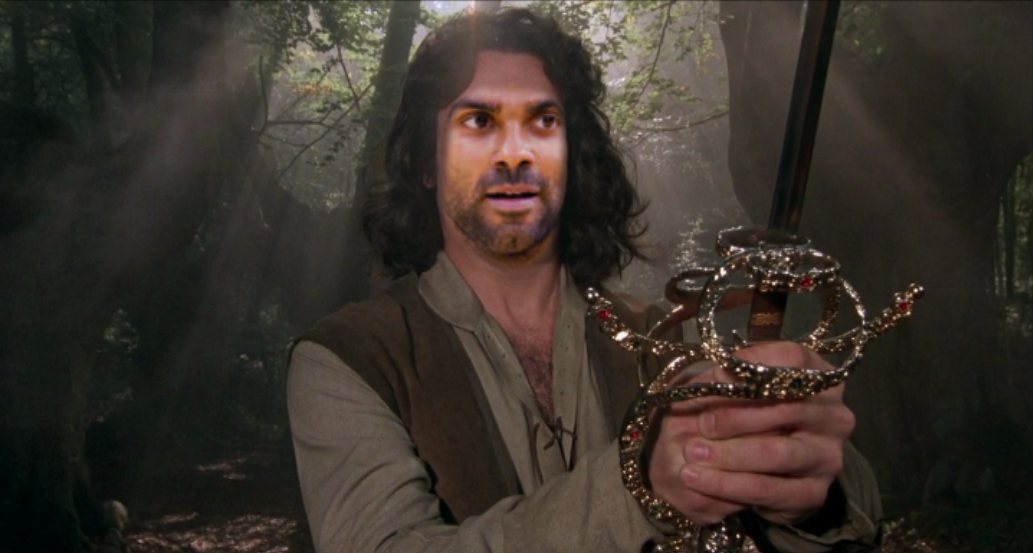 Tony Parker - Tonigo Montoya - The consummate artiste of his craft, his jab-steps and slicing cuts are renowned across continents. Fuelled by the disappointment of past years, he will take apart anyone who stands in his way.
Tiagocup was surprised upon returning to her room to find Manuley lying on the trainer's table. Professing her love of his unique basketball skills, Tiagocup did not understand that Manuley was still recovering from his injuries of last year. The Prince burst into the room, determined to end the threat of the Man in Black once and for all. Griffindinck demanded a sudden death match, but Manuley retorts with a contest "to the pain"- a long drawn out duel over the course of seven games.
Prince Griffindinck: I think you're bluffing.
Manuley: It's possible. I might be bluffing. It's conceivable, that I'm only lying here because I lack the strength to stand. But, then again... perhaps I have the strength after all. 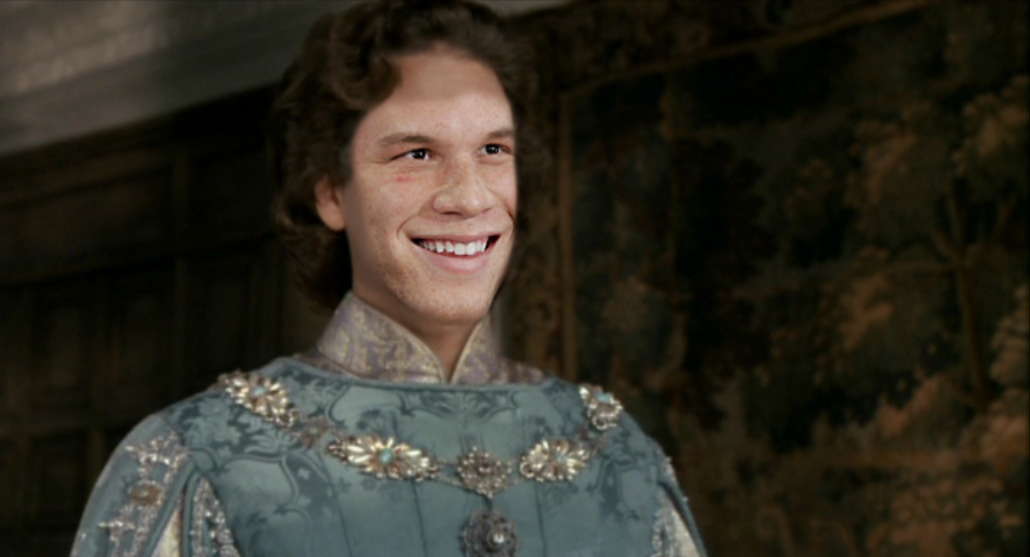 After Manuley backs down the Prince, who cringes from the confrontation, the duo is joined by the newly triumphant Tonigo. As suave swordsman inquired about as to the whereabouts of his giant friend, the group heard the voice of Timzik, wafting up from the court, tinged with laughter. Timzik had found a stable of horses for their getaway. The horses were silver and black, with the letters B-A-M mysteriously branded on their hides. And the foursome rode away into the night, looking for their next ring...
* * *
Grandpop: Since the invention of the championship, there have been four rings rated the most passionate, the most pure. This one left them all behind. The end.
So as GrandPop closes the well-worn book, the young PtR quietly whispered, "GrandPop, maybe you could come over and read the story again to me tomorrow." To which GrandPop replied, "As you wish." 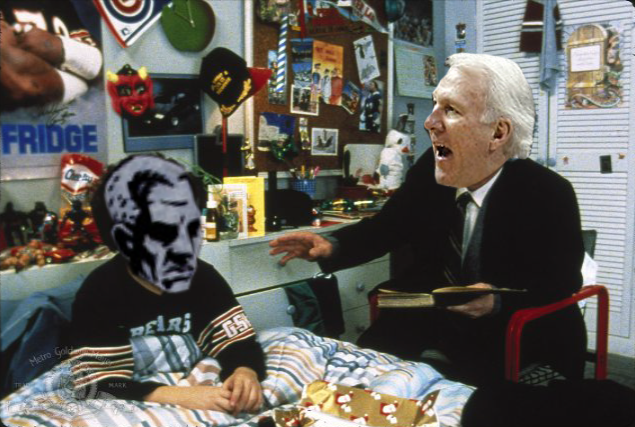 It's the quiet guys you should fear.

Author Note: Yes, I took liberties with the original story, but I hope you can appreciate that it's all in good fun.