Share All sharing options for: Jazz Expert Predicts Trouble For Clippers Against Spurs

Fraternizing with the Enemy: Amar of SLC Dunk and JRW Close the Door on the Jazz and look forward to the Clippers

Amar of SLC Dunk has been good enough to blog with us through the whole series between San Antonio and Utah, now he joins us one more time as we look beyond the first round sweep, the nine days off between games, and concentrate on a new foe. 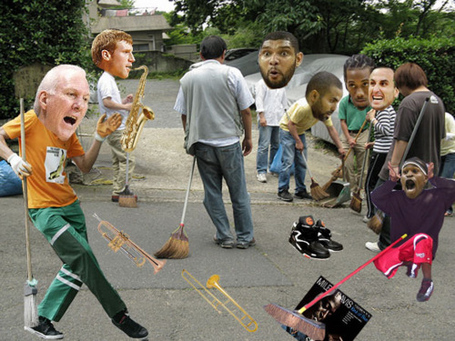 (Will somebody please tell me who created this so that I can give proper credit. I love it so.)

A few days ago I wondered who the Spurs would rather face, the Los Angeles Clippers, or the Memphis Grizzlies. I think I have my answer now.

A view from the rear view mirror - The Spurs should be super ‘stoked' to be playing the Los Angeles Clippers. First of all, congrats to the Clippers, who have now moved passed the Western Conference's first round for just the second time in franchise history. That's really good for them. They're now going to get destroyed by a veteran team that knows what they are doing. Now, don't get me wrong, the Grizz would also get chewed up. But out of the two teams the Spurs can make a bigger statement by sinking the Clippers in the second round.

Revenge is a great motivator, but after four rings the Spurs are transcendentally removed from such petty challenges. The Clippers, on the other hand, exist on a diametrically opposite path. They are Lob City: driven by a rabid media in a large market. Their stars are full of flash, but inherently lack either experience or substance. The Spurs, on the other hand, are a well balanced team of push and pull. San Antonio thrives because of inner harmony (something four rings can help you find), while the Clippers succeed only by exploiting imbalance. San Antonio is unity. The Clippers are isolations that shun half their team out of the action. San Antonio has experience, but also brought along youth. The Clippers are a younger team, but have picked up hardened mercenaries. It is only right that these two teams face off in round two.

And the Spurs have the distinct advantage here. As a Jazz fan I know how you guys handled our sharing the ball / passing attack. While it may not be a test, it will be a good refresher for the Spurs to play against the three point shooting, isolation attack of the Clippers. (You didn't really have to worry about either of those in round 1) Memphis would have just been more of the same, as they don't take threes either. The Clippers, Kung-fu movie allegories aside, are the right team for the Spurs to face. And honestly, they are the weaker team. Pop will definitely feast upon Vinny Del Negro. Chris Paul will play dirty out of frustration. Your bigs (especially the bench guys) handled the Jazz bigs. They will find no trouble when defending Blake and his zero post moves.

I'd go out on a limb and say the Spurs win in 5 games. Easy. What do you Spurs fans think?

What's that you're saying? Spurs fans should be excited to see our team take on Chris Paul and Blake Griffin and the rest of the Lob City maniacs that just beat 80/20 odds and won a game seven in hostile territory? We should be "stoked" that San Antonio's taking on a playoff-tested team that was anointed at the beginning of the season as the best team in LA? You do know how the NBA playoffs work right? Okay that's a silly question. I'm sure you know that the team that doesn't go home at the end of a series is the one that's been deemed the better team -- not by the evaluation of experts, or by a poll of the fans, but by actual physical contest which has been adjudicated, scored, and observed the world over. And the unit that proved itself the superior team is the team that the Spurs will now play. Why would we be excited to get the better team? What kind of sense would that make? I guess I just don't understand your perspective.

Unless, perhaps, you happen to be referring to the fact that most Spurs fans are, at this point, fairly hugging themselves over what they see as having dodged the bullet that playing the Grizzlies in the second round would be. And that I am just about beside myself with relief that Duncan will not have to bang with Gasol and Randolph over the course of a seven game series. San Antonio won't have to watch as, for the second straight year, Tony Allen wreaks havoc with the Spurs' passing lanes. And my kids won't have to look on as put my head in my hands, breathe a huge sigh, and explain to them what it means for one team to have another's number.

While none of these things were assured of happening if Memphis had held serve on its own court in the clinching game against the Los Angeles Clippers on Sunday, I can tell you that it isn't fun thinking about those possibilities, even after it's a certainty that none of them will ever happen. And that is especially true, and this conversation incredibly appropriate, as we pass the one year anniversary of Memphis tanking in order to get the Spurs in the first round. I always grew up expecting losses for teams that maneuvered in order to play a particular opponent. In my childhood sports mind, when the other team caught wind of what had happened, they'd become Uber-motivated (tm). But that is certainly not what happened last year, and while the Spurs didn't do any kind of maneuvering at all, my guess is that the coaching staff is allowing themselves a small sigh of relief before getting back to work getting the guys ready to play against the Clippers on Tuesday.

But I'll tell you it really is a good thing to finally have a game scheduled that I can look forward to. Nine days in the middle of the playoffs with out a game is, regardless of how it makes the players feel, really annoying to deal with.

As far as your description of the Clippers, I'm really not comfortable agreeing with it. I watched enough of the first round series against Memphis to know that Griffin does indeed have a post move or two up his sleeve. And while you place the advantage squarely on San Antonio side, and really it would be hard not to do that especially since they're the number one seed, I have to tell you that I'm a bit less boldly optimistic about there being a beat down of the kind you and I witnessed between the Spurs and the Jazz. Yes I see an entirely different kind of series shaping up from the one the Spurs played in the first round. In fact, I think I'd have to say that it's going to take at least five games for the spurs to dispatch the non-Laker Los Angeles team.

Oh, is that exactly what your own prediction was? Well, what do you know? That's weird.