So let me get this straight: there is a game tonight? An honest to goodness game? And the Spurs are playing in it? Am I dreaming? I'm not? Awesome! No more debates about who we prefer the Spurs' opponents be! No more watching lackluster Eastern Conference offenses that are really and truly offensive! No more hanging around on loser threads and making lists of top ten movies just to pass the time!

So it's the Clippers. Congrats to all you long-suffering Clippers fans out there. Los Angeles showed a lot of grit and determination in defeating a very physical and at times resurgent Grizzlies team, a team that never quite recaptured their magic from last season. The Grizzlies/Clippers series was oh so close up until the very last quarter when the Clips pulled away. For a while there, many Spurs fans had visions of epic revenge.

But revenge is such an unsatisfying motive, in my opinion. Last year is last year. In retrospect, the abrupt ending of the Spurs' season at the hands of the 2011 Grizz played its part in creating the 2012 Spurs. They are as laser beam focused as I can ever remember a Spurs team, and I am certain the ignominious end to last season has a lot to do with that. The level of concentration and coordination on this Spurs team is striking, and at times it feels like every aspect of the game is being orchestrated to the smallest detail, like everything has fallen into a place of perfection, and some thoughtfully chosen, familiar yet artsy theme song should be playing in the background. In widescreen, of course.

Many folks are still somewhat dismissive of our beloved Spurs, thinking that their best days are surely a thing of the past. If the cool and quiet dispatching of the Jazz in Round 1 did little to combat this impression in the minds of many, perhaps a Round 2 match-up with a young and glamorous opponent will do the trick. The Clippers are loaded with high-flying talent, but the Spurs have seen it all before, and will keep their heads and calmly execute their deadly system. As Spurs fans, I'm sure we all are hoping that the experience and focus of this veteran squad will once again prove too big an obstacle for a dangerous yet green team like the Clips to overcome.

On the other hand, it seems the Clippers have grown up fast. In all fairness, they have quite a bit of veteran leadership, from Chris Paul to Mo Williams to Kenyon Martin. And, as they showed in their seven game series against Memphis, the Clippers can be a physical, tough opponent, can play strong defense, and can play clutch when the game and series are on the line. They just won a game 7, on the road, in a very hostile environment. In fact, they won twice on the road in that series. They were down by a lot of points in the opening game in Memphis, and came roaring back with very little time on the clock to get a win. They also showed that they are much more than the Blake and Chris Show, with their bench playing a decisive role in the outcome of that series. The Clippers are good, folks. One caveat here is that they may be a little worn out from that tough series, and they are certainly a little beaten up, with both Chris Paul and Blake Griffin playing at less than 100 percent. After finishing off the Grizzlies, the Clippers must feel good about themselves, but they also might feel like a spent boxer at the end of an exhausting and bloody thirteenth round technical knockout.

What do the numbers tell us? I thought I would compare these teams' regular seasons to their first rounds, and focus just on offensive and defensive efficiency. For the year, the Spurs lead the league in offensive efficiency, at an impressive 108.5 points per 100 possessions. The Spurs were nearly seven points above the league average of 101.8 for the season. In their first round match-up with the Jazz, the Spurs actually improved on this slightly, finishing with a 108.9 in their four games. This should come as no surprise to anyone who watched that series, as the Spurs hummed along and did whatever they pleased on offense. But this is not typical. Offenses have predictably had greater trouble scoring in the postseason, with the average efficiency down to 98.7, over 3 points lower than the regular season. The Clippers ranked fourth in the league for the regular season at 105.2 per 100 possessions, also well above the average, but they dropped to a more pedestrian 99.6 in their first round series against the Grizzlies. A lot of this, of course, has to do with the opponent. During the regular season, the Grizzlies' defense was among the top ten in defensive efficiency, holding their opponents to 98.9 per 100 possessions, and they brought the Clippers' offense down to earth somewhat in their series. The Spurs' opponent, the Jazz, had a 103.6 rating for the the season, and just had no answers for the Spurs. The Clippers were only slightly better than the Jazz during the regular season, giving up 102.9 per 100 possessions. The Clippers did a great job of defending against the Grizzlies, holding them 1.4 points below their regular season offensive efficiency, but the Spurs are a much better team than the Grizz on offense. Will the Clippers have better success than the Jazz at slowing down San Antonio?

Flipping to the Spurs on defense, San Antonio finished the regular season at 11th place in defensive efficiency, holding opponents to 100.6 points per 100 possessions, but were extremely impressive in Round 1 against Utah, holding them to a whopping 91.0, second only to Boston's 90.6 effort versus the Hawks. And this was not against the Sisters of Mercy, but rather a Jazz team that was putting up 103.7 per 100, ranked 7th in the league in this stat. A lot of us around here have felt the Spurs have gradually been improving that defense as the season has worn on, and their performance against Utah is some solid proof that this is indeed no mirage. Offense is still great, and now defense is becoming great. I like the sound of that. 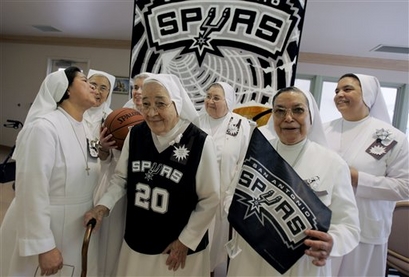 How the Sisters of Mercy roll.
via vjmorton.files.wordpress.com

But. I don't want to get too carried away here. The ice is awfully thin any time you try to predict how teams will match up based on how they played against other teams, and one never wants to make too much of the numbers from one series alone, as the sample size is so very small. And here is another point of caution: In a long series, teams figure each other out. By the fifth, sixth and seventh game, those easy shots are increasingly scarce because the opponent knows your plays almost as well as you do. We saw this begin to happen in Game 4 of the Spurs/Jazz series. So I would take all of the above with a cautiously optimistic grain of salt. The short series against the over-matched Jazz probably made the Spurs look a little better than they really are, and the long, grinding series against Memphis probably made the Clippers look a little worse than they really are.

Will the Spurs be more rested than rusty? Over the last several days Gregg Popovich and his staff have reportedly held some of the toughest practices of the entire season, with several live scrimmages, referees and all. It's not the same as a real game, of course, but hopefully the rhythm is still intact. Certainly the Spurs should be very prepared, and very fresh. This much I do know: Games 3 and 4 of this series are, ludicrously, back-to-back. So it is even more imperative that the Spurs take care of business and win their home games, starting tonight.

Game Prediction: I truly think this series will be tight, but this game may be lopsided. The Clips have spent the past two weeks wrestling with an injured grizzly bear, and now they are going to be dealing with a fast, healthy, deep pack of fleet-footed and hungry wolves, big super-intelligent wolves that speak French. Spurs will have them back on their heels, and win by 15.