Share All sharing options for: zzzz...WAKE UP, Spurs fans and PtR collective! 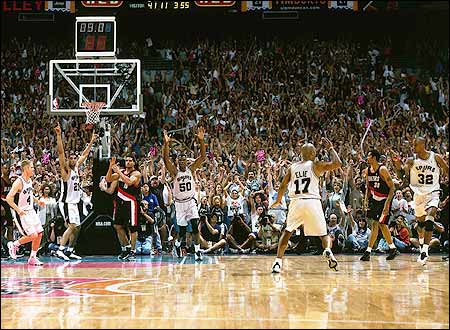 So the Spurs haven't played in about 6 months and if these DTOUR threads are any indication, you #'ers have gotten soft and boring.

Follow me after the jump and I'll do my best to electrify you guys.

McDyess' tip-in game winner at the buzzer (via NBA)

Manu had tried a 3 pointer -- clank. Tony Parker tried a teardrop in the lane -- doink. Tim Duncan tried a fadeaway jumper -- brick. This game was won only thanks to Antonio McDyess' last second tip in. It was the happiest we'd seen Coach Pop.

Up until it went in, we were upset with Gary Neal's performance. He was 1 for 6 before the shot. He lost a pass from Parker, who had 30 points, with 9.5 seconds left in regulation. Then, we all kNEALt before ZOD.

Portland, who narrowly lost Game 1, emphatically outplayed the Spurs in the first half of Game 2. In the third,

Portland increased its lead to 18 before the Spurs went on a 8-2 run. Blazers coach Mike Dunleavy called time to

break their momentum, but the Spurs scored 9 unanswered to cut it to 3.

The momentum went back and forth until Damon Stoudamire was fouled with 12 seconds left in the fourth. He hit

1 of 2 free throws to make it 85-83. The Spurs called time to advance to halfcourt. Following the time-out, Spurs

Elliott, who privately battled an ailment that required kidney transplant surgery, caught the inbounds pass near the

sideline. He stayed on his toes while turning to shoot a 3, careful not to set his heels down and turn it over. With

Rasheed Wallace running at him trying to block the shot, he arced it over his outstretched hand and in with 9

seconds left to give the Spurs an 86-85 lead, their first. Time expired after Portland failed to score, and the Spurs'

only lead was the final score.

Game 1 of the 2008 playoffs vs the Suns. The Spurs took their first lead late in the 4th quarter, but found themselves down again with 1:10 left. Michael Finley drained a 3 with 15 seconds left and sent the game to it's FIRST overtime. Down 104-101, and with only 11.8 seconds remaining, Manu curled around a screen and threw it to a wide open Tim Duncan who, "Would it up. Threw it up there and hoped for the best," he would later say after the game. The Spurs went on to win that game in triple overtime.