Here is the backstory, for those who missed the introduction to the first battles, and yesterday's resolution of Heat/Knicks and Pacers/Magic.

The Oklahoma City Thunder as House Atreides (From Dune)

Forced to move their home from a rainy land, to one far more dry, they have emerged from years of wandering in the desert to claim their birthright. Now they wield frightening power thanks to the instinctive abilities of their young leadership.

The Dallas Mavericks as Watchmen

They used to be in charge. Then things fell apart, some members left the team, and now the world has turned its back on them. Their players became alienated or lost their mojo, and now they're being picked off one by one.

Who Watches The Fremen 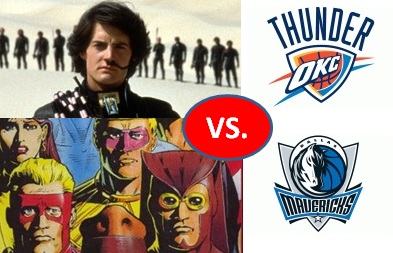 The hunter-seeker, a ravening sliver of suspensor-buoyed metal, hung heavy in the night. It swept through the air unnoticed by the knot of off-worlders, its flight silent but ungainly; the weight of its boosted transmitter made it less nimble than the one that had sought the life of Paul Atreides his first night on Arrakis.

Paul had redesigned the transmitter himself, thinking it prudent that he control the little assassin from a greater distance than a hunter-seeker usually permitted.

"Is he of no more use than this?" The Lady Jessica watched over her son's shoulder. On the viewscreen, the blonde off-worlder was explaining to a group of his costumed fellows, all of the twists and vagaries of an excessively complex plot to seize the Trophy - and with it, enough power to bring both the Imperium and the Landsraad to their knees. "The Bene Gesserit will be sorry to lose the bloodline of Adrian Veidt. He has the mind of a Mentat - and a strength of will I have not often observed outside the Sisterhood."

The scion of House Atreides caressed the hunter-seeker's controls, and the view pulled back to encompass Veidt, Dreiberg and Juspeczyk. "Veidt saved his world once, you know." Paul's lips twitched into a half-smile. With the press of a button the viewscreen went dark. "He murdered thousands, that billions might be saved. A man of great subtlety, and greater violence."

"A man of inscrutable motives." Jessica sighed. "Questions will be asked, Paul. In every corner of the galaxy people will wonder why Adrian Veidt left the planet he saved to die on Dune."

Paul nodded. "They will ask. And no answer will be so satisfactory as to remove the invaluable suspicion we require. Veidt's name is synonymous with subterfuge and hidden complications. The true explanation - that he came because I invited him, and because he smells power that he thinks I think he doesn't understand - is too simple to ever be accepted."

"We could tangle spiders in the webs you weave," his mother replied approvingly. "What, then? Veidt came to Arrakis to seek the Trophy, but other suitors will not be far behind. The Landsraad have asserted their claim, and designated House Harkonnen to enforce it - though reluctantly. The Padishah emperor will hardly sit idly by and watch the balance of power shift away from the Imperium. A thousand hands stretch forth to grasp the Trophy that is the only hope for House Atreides, and if we are suspected in the death of Adrian Veidt, those hands will have the excuse they seek to throttle us once and for all. There is still time to change your mind, Paul. We can take the family atomics and leave the system, begin it all again."

"As a rogue house?" Paul chuckled. "I would not flee those grasping hands, not even if I had the means even to singe their fingertips. But there is more than one way to put us beyond their reach."

The Lady Jessica's face betrayed no hint of emotion. "The fire with which you play may singe us as well as our enemies. Within a day or two the skies of Arrakis will be black with ships, and I do not expect the Spacing Guild will be disposed to grant us safe passage if we spill the blood of Adrian Veidt upon the sands of Dune. The spice must flow, and the Guild will not appreciate our making their treasure-planet the center of so much violent attention."

"Indeed." Paul's smile broadened. "The value of Arrakis cannot be quantified. Without the spice, there is no interstellar travel. Disruption of the harvest, even a temporary disruption, would be catastrophic. Remind me, mother ... and forgive my change of topic ... what penalty can a house expect for violating the Great Convention?"

Her Bene Gesserit training proved wholly unequal to the task of concealing Lady Jessica's surprise. "Paul! Surely you don't ... that would be madness, suicide! If it were proven that House Atreides had deployed the family atomics, the Landsraad would be forced-"

"-to dispense the appropriate punishment." Paul nodded. "The total destruction of our fine and ancient house and all that we command. There would be unanimous assent. Planet-killers would ignite the atmosphere of this desolate little world, stone-burners would char us to a floating cinder. Arrakis would be no more."

With that, Paul set down the controls. His mother's eyes lost their focus as her son's scheme unfurled in her mind.He will condemn us to death. By any just law, he will earn our absolute destruction. And yet, in so doing he shall put us - for a time, at least - utterly beyond the reach of any justice ... and of any competition for the Trophy. The Spacing Guild will impose immediate embargo; rather than risk the Landsraad's enforcing the Great Convention upon the only source of their precious spice, all space travel to and from Arrakis will be suspended. It will take months, years even, for the other houses to decide our fate. In that time, we can pursue the Trophy at our leisure. Once that is in our grasp ... oh, how different will be our bargaining position. Mighty criminals have been forgiven greater crimes - and no criminal has ever been so mighty as we should be.

She bent at the waist to kiss the top of her son's head. "When?" she asked. "When will you do this thing - destroy Veidt and a thousand years of our family's history in atomic fire?"

"When?" Paul's blue-on-blue eyes twinkled. "I did it fifteen minutes ago."

The San AntonioSpurs as The Great Old Ones (by H.P. Lovecraft)

The trophy was theirs, once. It shall be theirs again. Ancient beyond reckoning, yet more powerful than mere humans can conceive, the stars have aligned at last for the Elder Gods of the NBA to reclaim their thrones.

The Utah Jazz as Dumbledore's Army

These kids have only begun to understand the great power that dwells within them, but is it enough to defeat the Team That Must Not Be Named?

IN PART TWO OF

The Shadow Over Hogwarts 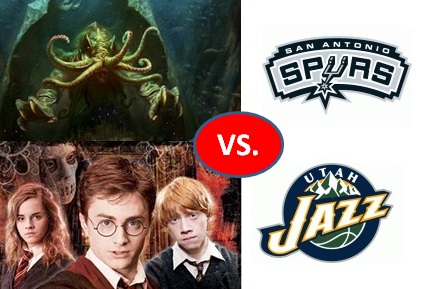 My name is Ronald Bilius Weasley. I address this letter to anyone, wizard or muggle, who may yet be alive to read it. I do not envy you your survival. I see now that this world, and the human body, are frail and dreadful things. In a very few minutes I shall leave them both behind.

My voice quavers as I relate these words to Hermione's old dictaquill. Indeed, my hands tremble so greatly that I can scarcely even hold the wand that will, I pray, grant me escape from this horror into which I have plunged our sorry planet. Yes, I - I! It is I who am responsible, along with the late H. Potter and Miss Granger, for the unmaking of all that is right and clean and noble. Truly, our punishment is too light for the unimaginable blasphemy that we have committed. Yet must I unburden my soul before I commit it to eternity.

It began, as so many of my adventures have, in an attempt to defeat the foe who represented, until so recently, the height of repugnance and wickedness for all wizardkind. Voldemort - how pedestrian, how mundane an adversary he seems now. I am moved almost to laughter when I think that he - he! a man, a being of flesh and blood! - once was spoken of in whispers. To think , there was a time when such a petty creature wore the mantle of He Who Must Not Be Named! How gratefully would I now embrace a thousand Voldemorts in preference to the truly nameless terror that moves even now through the halls of this very castle.

In truth I know (and how that knowledge torments me!) that I have witnessed only the least of the horrors that we have unleashed upon our defenseless race. What was the name by which Hermione called it? What was it that she screamed, in that last second before she was swept away in its hideous embrace Shoggoth. That was the name she gave the thing that killed her - for truly do I pray that she is dead, and all that she was truly extinguished, even as I hope that I myself may find comfort in true annihilation. The thing ... it was terrible, indescribable, vaster than the Hogwarts Express. A shapeless congeries of protoplasmic bubbles, faintly self-luminous, and with myriads of temporary eyes forming and un-forming as pustules of greenish light all over the corridor-filling front that bore down upon us, crushing the frantic house elves in its path.

But dear god! Would that such a beast, or its innumerable dark brethren that pour down in mad, endless hordes from the window in the fabric of reality that we so foolishly opened for them, represented even the hundredth part of the menace we have visited upon the world! Would that I had died before I ever saw the shadows dancing on the moon - shadows of great tentacles, shadows from extremities of time and space that no man could hope to conceive of and retain his sanity!

Hermione is gone. The Boy who Lived lives no longer, and my time too grows short. I hear a ghastly slithering in the corridor outside my door. So I bid you farewell - and most urgently do I entreat you: if the world survives my error, make every assurance that it is never repeated. Find that damned book, the Necronomicon, and put it to the flame. Let it destroy no more lives, as it has destroyed mine.

The door is shaking! I hear it giving way! The mirror stands before me; my wand is in my hand. Avada kedav--