The epic advances as the first round comes to an end. With each passing contest, we draw closer to the claiming of the final prize, and the path begins to be strewn with the remains of those less fortunate competitors. Here is the backstory, for those who missed the introduction to the first battles.

Here are the ground rules of the Survivor Series. I chose a different group from literature, cinema or pop culture for every single playoff team, based on the qualities inherent to that team, and now I'm bending genres to create a single, unified story woven together from these fictitious groups battling it out at the same time the NBA teams they mirror are competing. The playoff results will dictate the plot of each story, and I'll continue this until the champion is crowned, and the characters representing that team will be the last to survive.

Miami Heat as The Totalitarian Government of Oceania in George Orwell's 1984 (A.K.A. Big Brother)

The boys from the big city have partied hard this year, but will a few talented and happy-go-lucky warriors be able to overcome their more disciplined foes?

IN THE SECOND INSTALLMENT OF... 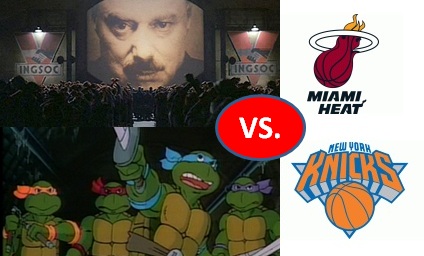 The pizza place was almost empty. A ray of sunlight slanting through a window fell on dusty table-tops. It was the lonely hour of fifteen. Tinny music trickled from the telescreens.

The four heroes-in-a-half-shell sat in the corner, gazing at the cooling slices on their plates. Now and again they glanced up at the vast face which eyed them from the opposite wall. BIG BROTHER IS WATCHING YOU the caption said.

Raph was listening to the telescreen. At present only music was coming out of it, but there was a possibility that at any moment there might be a special bulletin from the Ministry of Peace. On and off he had been worrying about it all day. A Eurasian army (Oceania was at war with Eurasia; Oceania had always been at war with Eurasia) was moving southward at terrifying speed, intent on claiming the Trophy for its own.

"They can't get inside you," April had said. But they could get inside you. They had gotten inside all four of them. Had they spent weeks there, inside the Ministry of Love? Months? Or had it only been hours since each had been shown the hopeless lie that lay at the heart of 'Turtle Power'?

Donny was the first to speak. "I betrayed you," he said baldly.

"All you care about is yourself," Leo echoed.

Suddenly a trumpet-call let loose an enormous volume of noise. Already an excited voice was gabbling from the telescreen, but even as it started it was almost drowned by a roar of cheering from outside. The news had run round the streets like magic. Fragments of triumphant phrases pushed themselves through the din: "Utter rout - half a million prisoners - complete demoralization - greatest victory in human history - Trophy within our grasp - not one, not two, not three - victory, victory, victory!"

Raph, sitting in a blissful dream, paid no attention. He was back in the Ministry of Love, with everything forgiven, his soul white as snow. He was in the public dock, confessing everything, implicating everybody. He was walking down the white-tiled corridor, with the feeling of walking in sunlight, and an armed guard at his back. The long-hoped-for bullet was entering his shell. He loved Big Brother.

The Indiana Pacers as The Fellowship of the Rings

A ragtag band drawn from all corners of the league … somehow, this motley crew has forged a destiny for itself, but the road ahead is long and fraught with peril.

The Orlando Magic as Reservoir Dogs

This isn’t how it was supposed to go down. The plan was perfect – but then the backstabbing started, people got hurt, and now they’ll be lucky to make it out of this season alive.

IN PART TWO OF 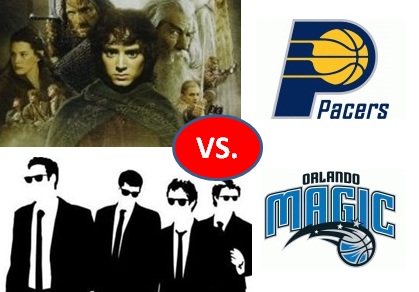 Long the party stood upon the woodland path, their eyes locked with those of the bandits. Elf and dwarf, men and halflings, each strained nerve and sinew as hands clenched hilts and drew bowstrings; yet no word did they utter. At length Legolas broke the taut silence.

"What think you, Gimli?" the elf asked, arrows knocked preposterously between his manicured fingers. "The Fellowship can ill afford delay ... yet do I fear these black-clad strangers. Men of violence they seem, and the arms they bear are strange to my eyes."

The dwarf grunted. "No wizard's toys these, Legolas, and ye are right to fear." The dwarf glowered up at the black mouth of the barrel leveled at his head. "These brigands bear the Nynemil, forged in the fires of Smith and Wesson. ‘Tis said that the slugs from a Nynemil passeth through a coat of mithril mail like beer through a hobbit. What say ye, Aragorn? Aragorn? Hey, Aragorn!"

"Huh? Oh." Isildur's heir awoke from his reverie. "This reminds me of a song," he said at last. And before anyone could stop him, he began:

Well, I know not why I came here this eve'

But there is something here amiss, I believe.

I'm afraid that from my chair I may fall

Down the stair I may well tumble withal.

Orcs to the left of me, goblins to the right,

"Does he do this all the time?" interrupted one of the bandits, who held a wounded comrade with the hand that wasn't pointing his own Nynemil at Aragorn's nose.

Legolas shrugged. "Yeah, pretty much. You get used to it."

Again the uncomfortable silence descended. The leader of the gunmen sneered. "Well, are you going to aim all day, little fairy, or are you going to shoot? Where I come from, we resolve narrative cul de sacs by killing the entire cast. What are you waiting for?"

Then, eagles happened. Hundreds of them, enormous freaking eagles, completely out of nowhere. In an instant the bandits had been torn limb from limb and messily devoured; in another, the Fellowship were borne aloft astride the mighty birds.

Merry clung tightly to Pippen as they soared over the treetops. "Seriously?" he asked. "We've been looking for the Trophy for months now, on foot, with all of Middle Earth at stake ... and now it turns out we've got giant eagles on our side? Where have they been all this time?"

The feathered behemoth on which they rode chuckled deeply. "I suppose you could say," it rumbled, "we were ‘waiting in the wings.'"

Merry groaned. Pippin shook his head. "It's gonna be a long trilogy. Isn't it?"