Stephen Jackson's Foray Into Hip-Hop is Actually Quite Good

Share All sharing options for: Stephen Jackson's Foray Into Hip-Hop is Actually Quite Good

(SJFIHIAQG, Get the Money, Dolla Dolla Bill, Y'all)

Originally, when I conceived of this post to review the latest mixtape of Stephen Jackson (aka, Stak5) I was honestly kind of hoping for the worst: I was looking forward to finding that Stephen Jackson - who promotes his mixtape constantly on Twitter - had come up with an epic bomb, something so transparently ridiculous and self-unaware that only Jack's friends and family - along with the various hip-hop figures in Jack's contellation of contacts - would humor him to enjoy.

Not only would this premise allow me to make light ridicule of one of the best characters and most interesting individuals in the league, but I would also be allowed to go into a really fun writerly character: White Boy That Deliberately and Selectively Misunderstands Absurd Hip-Hop For Humorous Effect. Finally (I had it all planned out), I could lay out the conditions for the occasional absurdities of the genre I love: The beefs and swagger, the less-than-half-hearted political messages, the recycled beats, the soon-to-be-anachronistic pop culture references, and the constant name-dropping.

Unfortunately, "Trill Mixes" (free download here) is actually pretty decent, and what absurdity it has is mostly washed away in professional-quality production and a (:sigh:) legitimately humble sincerity that testifies to Jackson's life and career. So I am unfortunately obligated to make a positive, respectful, objective review. (I know, how fun is that, right?) 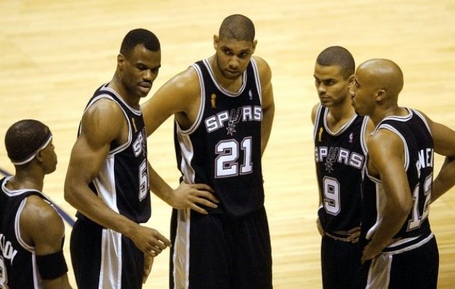 "Yes, Stephen, we'll all buy your album in nine years. Don't worry. Now get back into the huddle. It's the Finals."
(Photo by Jerry Lala)

Tim Duncan literally owns this album, and not just to be nice, but probably, alright, that's likely one of the reasons, but not the only one.:

Has Duncan heard him rap: No, he hasn't. But he has both of my CDs. And I didn't ask for them, so that was a good thing. He asked for them.
Does Duncan have them just to be nice: Tim's never nice to me. That's one thing. He's never nice to me. He's always real with me, and that's the relationship we have. He knows that basketball's first and rap is always just a hobby — it's nothing that I'll put before basketball and he understands that.
-Salt Lake Tribune, April 30, 2012: "Spurs' Stephen Jackson on 'weird' Tim Duncan, rap CDs, 'stopping' Tony Parker"

Things that "trill" (the word that S-Jax seems to use a thousand times whenever hip-hop comes up) is not a portmanteau of:

-"Tall Krillin" (or "Tall Kirilov"). It's not referring to Matt Bonner

-"Tim Duncan," "Richard Jefferson's replacement," "Illmatic," and "Malice in the Palace." It isn't an elaborate combination of hip-hop and basketball figures.

-"Try to Kill." It does not mean attempted murder.

-"Tree Mill." If this were what "trill" meant, it would undoubtedly be an elaborate reference to making money ("paper"). But it doesn't. That's not the right portmanteau.

Things that "trill" is a portmanteau of:
-"True" and "real".

What he talks about:
Well, he talks about making a lot of money and buying luxuries with that money but still being the same, despite that money. But he also talks about his little brother's death ("I'm On Forreal," most legitimately touching song on the album), explains how his upbringing influenced his decisions at the Malice in the Palace ("Where I'm From"), and discusses how he has had a god-given gift that has allowed him to play basketball for a living and take care of things. He talks about the blessing of having money, about how it's good to be a mascot for the ideals he's lived by (to be "real" without dying or going to prison). He talks about how it sucks that people will tear him down just for having money.

He talks about how there was a lockout, but then the lockout ended, making him even richer, to paraphrase DJ. He also name drops his DJ (hilariously-but-aptly named "DJ Scream;" dude yells "Scream!" as an interlude between lines), David Robinson, and the word and concept of "trill" quite often. Mostly standard stuff, but you can hear where he's coming from, and the rapping is decent, as well as the beats.

Re-playability:
Not much. The beats are mostly slow-paced, so like most hip-hop, if you just have it on, it's rarely unlistenable on that note alone. Usually what makes hip-hop occasionally hard to just have on is when the lyrics are "wack" (especially offensive and off-base), but this has none of that. This is simply fun stuff. S-Jax is not exactly Guru and DJ Scream is not exactly Premier, but it's never actively unpleasant. There's the occasional NSFW word and sexual references, so maybe you don't want to play this around children, but overall but it's pretty much just a solid, well-produced album.

I can't imagine listening to this more than 5-6 times, though, mostly because the lyrics are so direct, easy to hear in the moment, on the nose, and with very little imagery or poetic devices beyond the natural flow, which isn't exceptional. I STILL hear new things every time I listen to, say, Illmatic or Moment of Truth, and I've heard those at least 20 times each. I am not really hearing anything new on my third listen to "Trill Mixes". 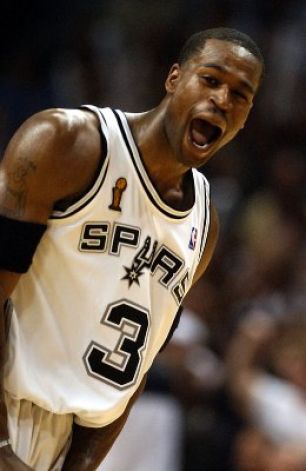 "'Jack’s pretty much been a Boy Scout most of his career and I look forward to fun conversations and humor and many good times with young Stephen,' Popovich responded." -Jeff Latzke, AP Sports
(Photo by Kin Man Hui)