Quick Pics from the Jazz Game 1

Share All sharing options for: Quick Pics from the Jazz Game 1

In the short time between games, I have only 2 pics and one great story from the first of two against the Jazz. And I'm also asking for 2 seconds of your time again to vote for my pic in FIBA's contest. Click on the link JanieAnnie's photo, mouse over my pic and click +1.

How much does Stephen Jackson love being back in San Antonio? Here's your answer: 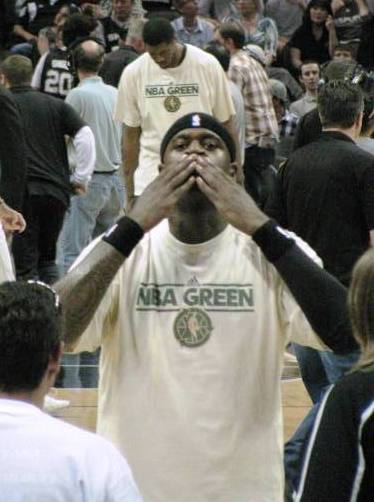 Jackson has started this pre-game tradition of blowing a kiss to the Sign Ladies, who display a sign of his jersey just before introductions.

While sitting courtside during warmups, a friend pointed out to me the following error in the lineup given out by the Spurs when fans came in the door. We decided it made Harris around 90 years old! 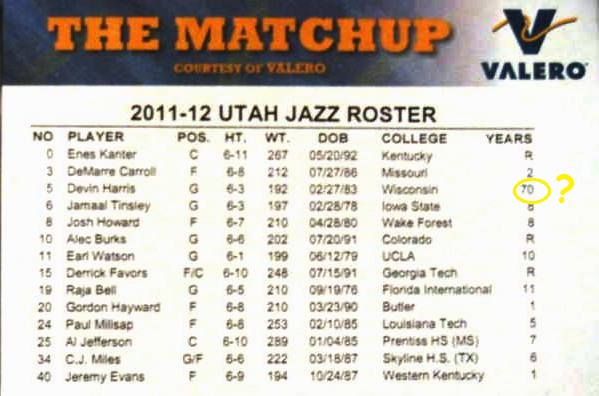 Since the Jazz were warming up at what is normally the Spurs pre-game court, I took the lineup over to one of their assistant coaches. He laughed and replied, "Yeah, sometimes he plays like he's that old." He also talked about getting a kick out of the Spurs listing Duncan's DNP reason as "old" in a recent game. When Harris came out to warm up, the coach came over and got the lineup to show to him. He laughed. My friend and I asked him what was his secret to staying so young. His reply: "Olive oil." Now, honestly, aren't these two pics worthy of a vote from you in that photo contest? Go back to the top of the post and click that link, today and everyday!