This is, generally speaking, the time of the season where rotations are being set and players are becoming fully integrated as the playoffs loom closer. It's the final stretch of about three weeks where teams are building up to achieve full symmetry just in time for their first-round matchups. And while the Utah Jazz are scrapping for the final playoff spot in the West, the Spurs find themselves sitting atop the conference and in absolute cruise control. If this is theoretically still buildup mode, anticipation of what the final product might look like is starting to trigger questions in the minds of analysts and fans alike. Can the Spurs really defy the odds and win a fifth ring? Regardless of what the future holds, this much is clear: teams with a date against San Antonio in the weeks ahead are in for a long night.

As has become the custom over the course of what is now an 11-game winning streak, San Antonio (40-14) convincingly handled an inferior Utah team 114-104 at the AT&T Center on Sunday night. It wasn't another 25-point beatdown like the ones administered at the expense of the Cavs and Hornets, but the Jazz (29-28) aren't that sort of team. They're a big, physical, imposing group in the middle of the Western Conference's scrum for the final spot in the playoffs. This was a game they needed but had no real chance of winning. The Spurs led wire to wire, and even when the home team's lead shrunk to single digits in the fourth quarter it was its MVP that put the nail in the coffin. Holding on to an eight-point lead with just more than two minutes remaining, Tony Parker scored the team's final six points to put the game away. He led all scorers with 28 points - including 10-10 from the stripe - in 31 minutes of action, and did it without playing at all in the second quarter. Utah had all kinds of problems cutting off Parker's penetration and consequently became the 40th victim of the Spurs this year.

San Antonio's season has become a model of continuity and consistency. Even with the return of Manu Ginobili (who was awesome on Sunday night, by the way) and the additions of veterans Stephen Jackson and Boris Diaw, along with the electric Patty Mills, the guys who kept the Spurs afloat early on haven't seen their minutes suffer. The constant energy of Kawhi Leonard and Danny Green has provided Gregg Popovich the luxury of maintaining stability in the starting lineup. By bringing Ginobili and Co. off the bench, it has prevented any potential stunting of the growth and progress of the Spurs' young contributors. Pop's masterful roster management has resulted in a team that's hotter than any other in the league. And speaking of roster management, this was yet another game in which a couple of Spurs had the night off.

Jackson had another day to, um, observe and reflect on the current state of things, which has become the norm for a certain group of "older guys." But it was the other DNP that came as a bit of a surprise. Before the game, Pop alluded to the fact there would be a change in the starting lineup, coming short of declaring what the change would actually be. There was a bit of speculation Tiago Splitter might get the start, but clearly it was just that. Uneducated Speculation. DeJuan Blair, the lone Spur to start all 53 games this season, got his first evening off all year with Diaw getting the nod in his place. Diaw's an interesting fit within that starting group. His versatility seemed to fit well alongside the typical starters, and his defense continues to be very good at times. But it's his height and length that gives the Spurs a different look than it has with Blair in the game. It's unclear whether this was a one-time change or if we might see it more going forward into the playoffs, but it gave San Antonio a look at a different option that seemed to work very nicely.

To put a wrap on this (it's been a long Easter weekend), the most dangerous element of the Spurs was once again on display on Sunday. Even without two major role players seeing any court time, San Antonio was able to keep a tough team at bay. When you play really bad teams and blow up the scoreboard with video game numbers, it's easy to become accustomed to near-perfect basketball. To reiterate the point: the Jazz are not going to allow perfect basketball to be played. They're a very physical team with a ton of interior size (that rotation of Al Jefferson, Paul Millsap, Enes Kanter and Derrick Favors is pretty nasty, and this was fun), and nothing comes easily against them. Pop mentioned before the game the tradition instilled in this organization by the likes of Jerry Sloan, John Stockton and Karl Malone has become embedded in today's version of the Jazz. But the Spurs were pretty comfortable all night. Even when the game got close there was just an unmistakable confidence there that it wouldn't get to the point of legitimate concern. Utah's a team fighting for wins night in and night out, and when you're rolling along like San Antonio is teams like the Jazz are usually the most dangerous. But for these Spurs and the way they're playing, it was just another bump in the road. 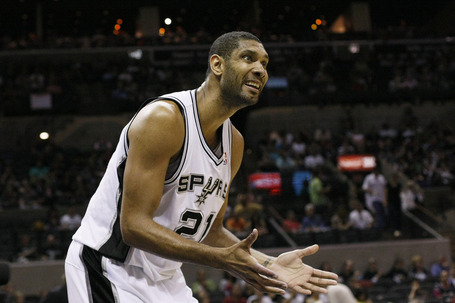 So as San Antonio clings to the top spot in the West (Oklahoma City beat the Raptors on Sunday, which I know is shocking), the road to the playoffs is about to get interesting. It's strange at this point in the season the Spurs have yet to play the Los Angeles Lakers, but they're about to get a heavy dose of them. Three games between the two teams in an 11-day stretch will certainly provide San Antonio the chance to see where it stacks up against the perennial measuring stick in Los Angeles. Games like Sunday night's give Spurs fans a perspective on what could be a first-round matchup, but the Lakers offer a different challenge. Sure, somewhere along the way we might see Pop sit key players, or possibly waving the white flag in a game (say, April 14 against Phoenix). But if there's one thing we've seen, it's that players have stepped up when needed all season and I doubt that will change going forward.

And, again, you never know what the future holds. But can the Spurs really defy the odds and win a fifth ring? There's a long way to go, but right now, I can't see why not.

Stars of the Game:

Duncan played nearly 31 minutes in this game, which is a little bit high for him. But then again, his length is needed against Utah's size. The guy just keeps producing at a high rate. There was an interesting graphic on the broadcast I caught after the game about Timmy's stats. They compared his 2005-06 stats with his per-36-minute numbers this year, and they're nearly identical. Tough to match numbers from yesteryear when you're playing, like, 10 minutes less per game. He really should have been an All-Star when you look back on it, right?

This was one of the first games in which we've seen of the "old Manu." He was super aggressive all evening, attacking the rim and testing the Utah interior on his way to 15 attempts from the line. Pop said after the game it's a good sign that he's looking equally confident from the arc as he is driving into the paint. Ginobili is putting those injuries in the rearview mirror. Now, let's keep them there!

The team MVP was amazing when called upon in this one. It was almost too easy for him to score when the Spurs needed it, and when you don't stop Tony you seldom stop San Antonio.

Here's to hoping you and yours had a great Easter weekend. Thanks for reading.