Ha, ha, what a cush write-up this is going to be, I thought to myself. Heck, I can just copy and paste Joe deLarios' awesome preview from Sunday, slap my name on it, pour myself a cup of Joe, call it a night. Those dang PtR readers are so blissed-out on Spurs giddiness right now, Kool-Aid practically seeping from their sweat glands. They aren't going to remember what they read twenty-four hours ago!

Well, there is that whole integrity thing to consider. Self respect, honesty, blah, blah, blah. Yeah. And on second thought, my pal Joe basically said all the good stuff yesterday, leaving me grasping for something, anything, to say about this second meeting with the Jazz in two days. Joe. I thought we were friends, bro.

A strange season is only getting stranger, and this home-and-home back-to-back is surely the strangest scheduling anomaly the Spurs have seen yet. If I were looking for positives, this is a good practice run for a playoff series, and we have a few guys on the Spurs who have little or no experience in that kind of situation. And this Jazz team very well could be our first round opponent, who knows?

Utah has some good things going for it. It is scoring 99 points per game this season, good enough for sixth in the league, and it's one of the best rebounding teams in the league at nearly 44 per game. A year ago, two areas that often got the Spurs in trouble were turnovers and rebounds. Outside of the Celtics game, the Spurs have done a great job of taking care of the ball this season, minimizing easy baskets and extra possessions for the other team. Rebounding is the other way an opponent can give itself more opportunities to beat you, and lately the Spurs have been consistently winning the battle of the boards, and that needs to continue tonight. For those of us who fret over the Spurs' less than outstanding defensive stats, winning the turnover and rebound battles means winning the possessions battle, and that will go a long way towards keeping down your opponent's score. In short, the Spurs need to continue to rebound strong tonight, against a team that crashes the boards effectively. Of course this means getting good position on Millsap and Jefferson, and Derrick Favors also brings great rebounding skills off the bench. In their victory over the Trailblazers a few days ago, the Jazz out-rebounded a team with similar size to the Spurs, and Jefferson, Millsap and Favors all had around 10 boards. This will be a big factor tonight. 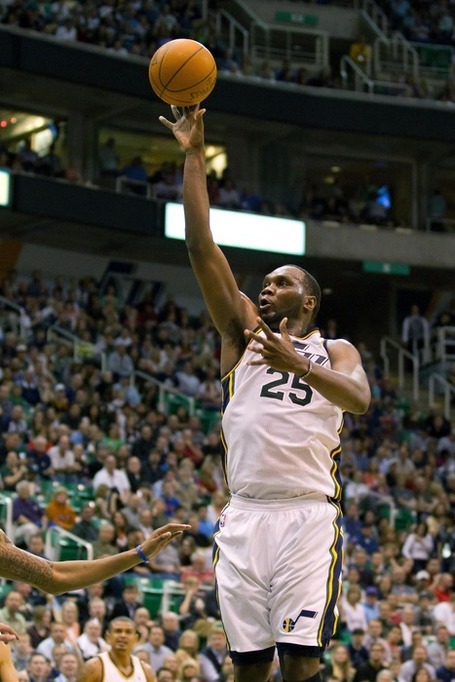 I really like this Jazz team. They are young, with a few savvy vets mixed in. Along with Favors, they have a developing Enes Kanter, giving them a lot of length behind Millsap and Jefferson. Utah shares the ball well, and they are disciplined. Gone are the days when their point guard would hog the ball and drive on fifty percent of the plays. Devin Harris has been a thorn in San Antonio's side on many occasions, and there is some quality depth backing him up. Jefferson and Millsap are both tough and athletic. They of course always have great home crowds cheering their team on, and they are hungry for that eighth spot in the West, and possibly higher. Houston, Dallas, Denver, Phoenix and Utah are in a logjam for those last couple of playoff seeds. None of these teams will be taking nights off, that's for sure, and if the Spurs are in any way satisfied with their precarious top spot, that enthusiasm gap can turn into a loss mighty fast.

NBA Stats Cube Lineup Comparison Here. Utah Jazz perspective can be found at SLC Dunk. If you want to watch one of the best movies about being a young American punk in the 1980s, you must check out SLC Punk!.

Game Prediction: Who plays for the Spurs tonight will have a big impact here. Pop will surely be looking to limit minutes on Parker, Ginobili, and/or Duncan. We should see a lot of playing time from the Spurs' vaunted bench. Both teams will likely be a bit weary by the time the fourth quarter rolls around, but Utah is at home and, as mentioned before, needs the win more than the Spurs do. Do the Spurs role players have enough in them to defy all of those odds? Nothing would surprise me anymore, but I am giving a slight edge to Utah, who wins by 3.