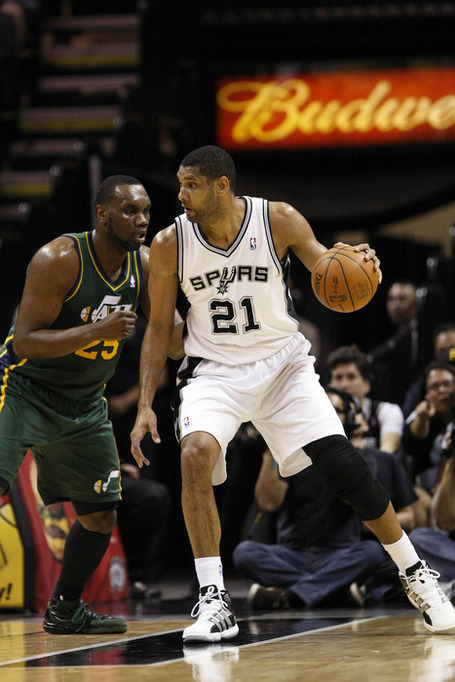 The Spurs started Boris Diaw instead of DeJuan Blair. This turned out to be an effective move as Diaw was set up to make great passes and take open jumpers (which he was successful with). His defense on Paul Millsap was superb, not allowing him to get into his shots. Tony Parker and the Spurs come out on top easily, lead 31-19 after the 1st.

A majority of the 2nd quarter was the lineup of Patty Mills/Manu Ginobili/Gary Neal/Matt Bonner/Tiago Splitter and was successful. Tony Parker and Tim Duncan got their much-needed rest for the game tomorrow night. Tim Duncan doesn't re-enter the game until 3:19 to go. At this point, the Spurs were up 50-35. Mills stays in for TP. Spurs up 40-57 at the half.

As per the course, Spurs start the 3rd quarter sloppy. Manu comes in and the tide changes (what did you expect). The Jazz were inconsistent on both sides of the floor, which allowed the Spurs to capitalize. At the end of 3, its 85-75.

Parker and the starters enter for the 4th quarter. They maintain the lead to 9+. Tinsley commits a clear path foul on Tony Parker, after Parker steals a pass from him, while Tinsley pushes Parker to create contact. Later in the quarter, Tim Duncan gets called for a technical foul for arguing a call. The next play, Duncan drives to the rim, with Al Jefferson holding his hip, does not get the foul called. Duncan is beside himself, stands at just the other side of the court trying not to get his second tech. Boris Diaw gets his 6th foul, being the first player this season for the Spurs to foul out. No concern, as the game is practically over with less than 2 minutes to go. Tony Parker gets the "M-V-P" chants at each trip to the foul line. Spurs win 114-104.