The San Antonio Spurs: Villains of the NBA

Share All sharing options for: The San Antonio Spurs: Villains of the NBA

[Editor's Note: I generally don't shift stories back to the top of the front page, but this one is so awesome, and since it posted over the weekend, I'm afraid that some of you might have missed it. -jrw]

Hey there, Pounders. It's been a little while since I've written - part of my job is in politics, and business has been booming - but I never stopped reading PtR, and I never stopped watching the Spurs. Last year I watched our regular season surge end in a disappointing fizzle, and this year I watched the world's best-run sports team turn its weaknesses into strengths. I watched as a quiet giant became a many-headed monster.

And I watched the world ignore the whole thing.

I mentioned that I work in politics; I know the importance of narrative. Humans need a story to help them understand the world. In this lockout-shortened season there's a dearth of storylines for fans to latch on to, and the small-market Spurs barely get a mention because the pundits don't have a convenient role into which they can force them. So far they've gotten away with it ... but it's plain to see that the time is coming when ignoring San Antonio will no longer be an option. Sitting atop the Western Conference while riding their second unmatched win streak of the season, there's a story in the Lone Star state that won't wait any longer to be told. For us, it's a good old-fashioned heroic epic. For the rest of the league, it's a horror story.

And we're the monsters.

The villain's storyline is an ancient and honorable one, and it's been a while since the NBA had a real villain. If you're a casual NBA fan there are some likable up-and-comers you can root for (OKC, Chicago) and some perennial powerhouses that you can bandwagon onto (Miami, LA) but who's the antagonist, the heel, the squad to make you see red or lie awake at night? LeBron took a shot at it, but like everything LeBron does, it all fell apart in the end. He may be a jerk, but he's not a monster, and in his heart he knows it. He knows because ... he's seen monsters. This year, if he can make it out of the East, he'll get to see them again.

Say hello to the bad guys:

"Listen, and understand. Tim Duncan is out there. He can't be bargained with. He can't be reasoned with. He doesn't feel pity, or remorse, or fear. And he absolutely will not stop, ever, until you are dead."

Timmy sure turned back the clock this year, huh? Seems like he's on a mission to rewrite the history books. A storm is coming, and all the little saviors-of-mankind - the anointed golden boys, the media darlings - are suddenly staring into cold, glowing red eyes that were forged in the fires of their destruction.

The media love to call him robotic. They admire his ruthless efficiency, but they call him emotionless, unfeeling. Too late they will realize that The Timmynator is not merely a merciless murder-machine - he is also an agent of destiny, the seed of a future that is as black as humanity's despair, as silver as a cyborg's skull.

We jumped all over poor Joey Crawford because he tossed Tim for laughing. If you'd been there, if you'd stood before that unstoppable engine of carnage and HEARD IT LAUGHING ... dear God, you'd have ejected him yourself! 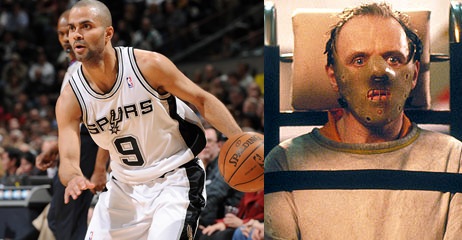 "Do not touch the glass. Do not approach the glass. You pass him nothing but soft paper - no pencils or pens. No staples or paperclips in his paper. Use the sliding food carrier, no exceptions. If Tony Parker attempts to pass you anything, do not accept it. Do you understand me?"

Are the lambs screaming, LeBron? Can you hear them still, late at night? It seems like such a long time since the King Without a Ring showed up for his first NBA Finals, looking like a rube with his chalky hands and expensive shoes, waiting to receive his crown. Do you remember how he hurt you, LeBron? How he took your dreams apart, and ate them in front of you?

How is it that this one little man, with his European manners and his weakness for the flesh of beautiful women, can have caused so much pain? He's easy to mock when he's safely out of sight, but when you turn around and see that he's right there on the court with you - unshackled and hungry - the laughter dies in your throat. You reel back, flailing to protect yourself from those quick, knifing slashes ... and when you glance up you see that the ball is no longer in his hands. The last thing you hear, as the darkness descends, is the sound of the assisted bucket and a cultured accent asking if anybody's got a nice bottle of chianti.

"Some men aren't looking for anything logical, like money, or endorsements, or personal comfort. They can't be bought, bullied, reasoned, or negotiated with. Some men just want to watch the other team burn."

BatManu? Seriously? We all remember that Halloween night when he effortlessly swatted down a flying rat right there on the court ... how did we not figure it out then and there? C'mon now - who would you send to kill the bat, man?

Despite the scars and bruises he's picked up over the years, our own Clown Prince of Basketball is still laughing. You never know what he'll do, and even when you do -- you can't stop him. To ask why he does what he does is to miss the point - Ginobili is an agent of chaos, but the havoc he wreaks is no accident. Beat him up, knock him down, you can't throw him out of his groove because creative destruction is his groove, and every player on the court is an instrument in the symphony of discord that he conducts. The plans you make against him are the grave in which he buries you. Hey, lighten up. Have some fun, it's all a game. Just don't expect to have the last laugh.

"He's just a rookie! A benchwarmer!"

"I'm not sure he's a benchwarmer."

"Yeah, well, what would you call him?"

"Well, sometimes I think he's pretty much a ghost."

Who the in the world is Kawhi Leonard? Does it even matter? He's coming, and you know he's coming. You know that he shouldn't be doing the things he does - he shouldn't be able to. Can't we just talk about this? Let's be reasonable, Kawhi, you're a rookie. Pop doesn't play rookies. Have a seat, let the grownups figure this out. Please, Kawhi, it doesn't need to be this way. You have plenty of time, and there are plenty of other Spurs we need to worry about. Let us worry about them, okay? Okay, Kawhi? Please? No! Please! YOU DON'T HAVE TO DO THIS!

@therealmadarab
Most of all beware ye the Daywon, the great hunger that walketh without knees. Long hath the beast slumbered, yet surely shall he awaken. #GreatOldOnes #EndOfTheWorld

@profarmitage
In dreams I roamed the cyclopean vaults of unhallowed Leng, and there I saw a dread thing, a blasphemous hulk whose proportions defied Euclidian geometry. #daywon

@DeJuan45
STFU @profarmitage I been workin out and eatin right lol.

@profarmitage
Sup @therealmadarab. I feel the abomination stirring, and fear the stars shall soon align. The postseason draws nigh, when the Devour of Boards shall rise from his watery tomb. #WeAreScrewed

"He is the Napoleon of the hardwood, Watson. He is the organizer of half that is evil and of nearly all that is undetected in this great sport."

Diaw may not have an athlete's body - except possibly in a tank of formaldehyde in his study - but he has a brain of the first order. Professor Boriarty sits motionless, like a spider in the center of its web, but that web has a thousand radiations, and he knows well every quiver of each of them. He does little himself. He only plans. But his agents are numerous and splendidly organized.

"Where's your head, Agent Kujan? Where do you think the pressure's coming from? Keyser Soze. And he makes love to pressure."

Stack had some unfinished business to take care of in San Antonio. Some people had forgotten that he even existed - but now he's back, and he has a score to settle. He'll break your ankles, he'll break your heart, he will break anything and anybody, because he does not care who you are or what you've done. He's coming for you, because you have something that belongs to him. By the time you know that he's real - that he really exists - you're already dead. 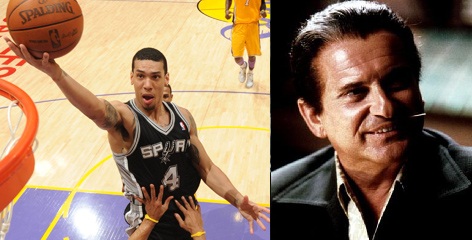 "I said, no more Cavs. Maybe you didn't hear about it, you've been away a long time. They didn't go up there and tell you. I don't play for the Cavs anymore."

Danny Green always seems like a pretty fun guy, laughing it up on the bench with his buddies. And why not? These days he's a made man, a vital member of a crew that takes whatever it wants. Don't think for a second, however, that Green forgets what it was like coming up. He's got pride, and a chip on his shoulder. Did you see what he did to his old team, the team that waived him? Waived him, like he was nothing? Like he was a #@$%ing joke? Like he was a clown? What, you think he's funny? Hey, yeah, I'm talking to you! Do you think Danny Green is #@$%ing funny? Does Danny Green #@$%ing amuse you?

"It's all part of a game called ‘Guess How You're Gonna Die'."

Do you like scary movies? Do you like knowing that one of the men standing on the court with you is going to rip your guts out, but you won't know which one until you feel the blade go in? Bonner, Neal, Mills and Splitter aren't the guys you plan for, they're not the threats you think about when you're going up against the Spurs, but you know that one of them - or more than one - has a mask in his pocket and a hunting knife in his sock. However hard you try, however careful you are, sooner or later you'll have to turn your back. That's when you can expect the dagger.

So go ahead, world. Write off the Spurs, you've done it before. Relax, go back to sleep. Our win streaks are just a tree branch scraping against the window; our twelve-deep roster is nothing but the wind. The noise that woke you up was only your imagination, but you should probably check it out just in case. Get up, close the window, make sure your doors are locked. Be our guest. We're already in the house.