In a limited pool of accessible tools, finding the right one for the job can be difficult. So what occurs when the right tool is unavailable? Then we are faced with a dilemma that forces us to think outside the box. We must use unorthodox methods to achieve our goal. As romantic as it sounds to 'think outside the box', if often results in a finished product that pales in comparison to a job done with tried and true methods and tools.

San Antonio Spurs' Coach Popovich has been successful in not only having the correct parts but also the knowledge on how to use them. This has resulted in a four championships. In the past few seasons though, Coach Pop hasn't had the advantage of possessing all of the necessary tools for a real run at the NBA Title. Within these past few seasons, Coach Pop has had to hide team deficiencies, cover up weaknesses and prevent the exploitation of his team's skill gaps.

By skill and providence, Popovich has been fortunate in gathering around him some very valuable pieces. Where once there was skill gaps, now there are skill advantages, where once deficiencies could be found, now there is sufficiency, and once were weakness could be exploited, strengths must now be realized. 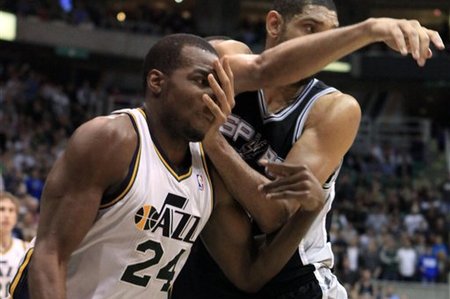 For the Spurs faithful, these names are known but for those who are curious about these new additions to the Spurs repertoire, here they are (in no particular order): Kawhi Leonard, Stephen Jackson, Patrick Mills, and Boris Diaw. These additional skilled men will add their strength to the HOF worthy core of the Spurs, Tim Duncan, Manu Ginobili and Tony Parker. In addition, the past season players who have proven themselves worthy and valuable to this team are Matt Bonner, Gary Neal, Danny Green, Tiago Splitter, and DeJuan Blair.

Now with the proper weapons gathered in the right place, the Spurs have the tried and true pieces to make a real run at the title this year.

Utah is a potential future perennial playoff team. They have some guns who are on the rise. They are only a game and a half behind the 8th seed. There is no room for mistakes for them. They must lay it all on the line every night to enter the playoffs. I bid them bonne chance, but not against the Silver and Black. Their blog SLC Dunk is a nice place to visit. *Also, they fear us so it is easier to be nice to them

*** Whatever the Spurs Tribe believes in, whether offense, defense or combination thereof, we can all be appreciative of the level of talent, commitment and teamwork that the 2011-2012 Spurs have shown us this year. And with a little bit of fortune and luck, the Spurs will once again consume their opponents and walk into the halls of the immortal champions. Crowned again with the laurels of victory.

Game Prediction: Hard Fought Battle between Spurs minus one starter (rest) and the Jazz who are seeking to enter the playoff arena Spurs by 6