The Spurs rolled over the Hornets last night: season high 128 points, 72 points in the first half, 82 points scored by the bench. The Spurs also had 5 guys from the bench in double figures, and 19 points was the most points scored by any Spur in a balanced attack (you'd expect someone to have 20 or more in a game with 128 points) To find out what $11,000 has to do with anything, you'll have to read the post!

Oh, one more number: 2 - just a little one. For 2 seconds. For 2 clicks. That's how long and how much effort it takes to vote for my photo in FIBA's photo contest. Click on the link JanieAnnie's photo, mouse over the photo, and click on the +1. Let's catch those French pro sports photographers! Vote every day from now until May 25. 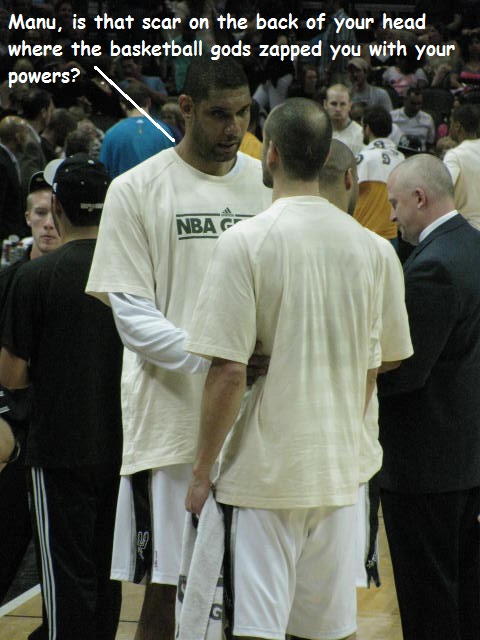 Timmy had on a different brace last night - an American shield with an eagle in flames. There is an eagle with a shield on the flag of the Virgin Islands. 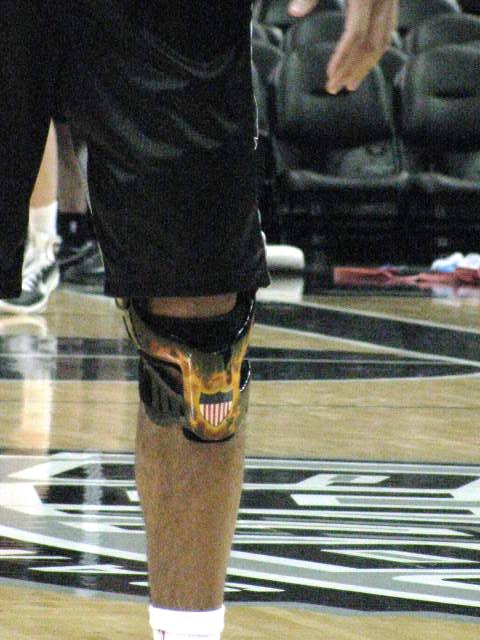 Tony's shin may have us calling him La Contusion - this happened in the Boston game. 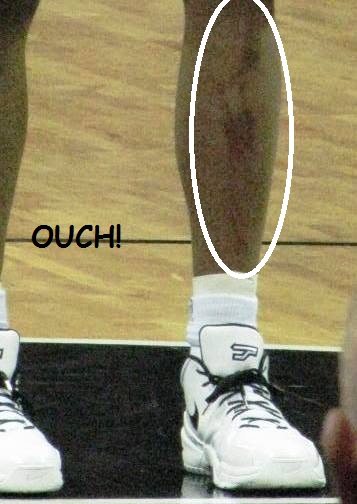 The addition of Patty Mills gives Tony a solid backup. I don't know what was really said at halftime between these two, but Pop had a very earnest expression on his face and Tony wasn't smiling. 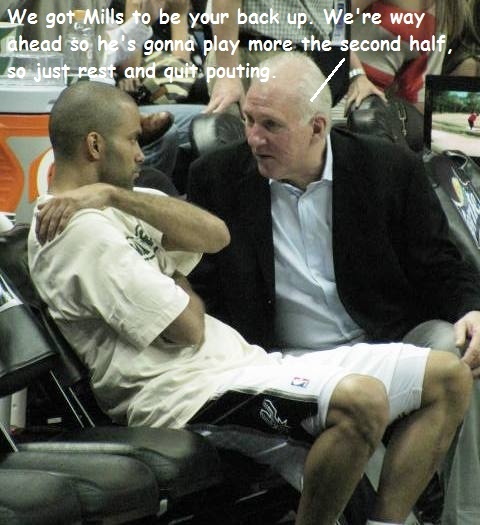 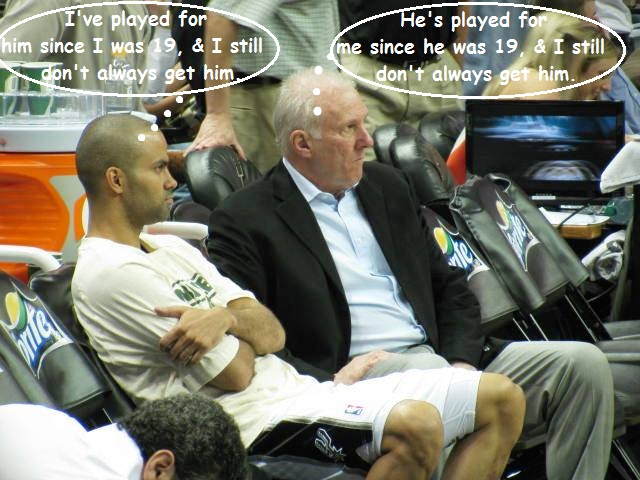 Other random photos from the game: 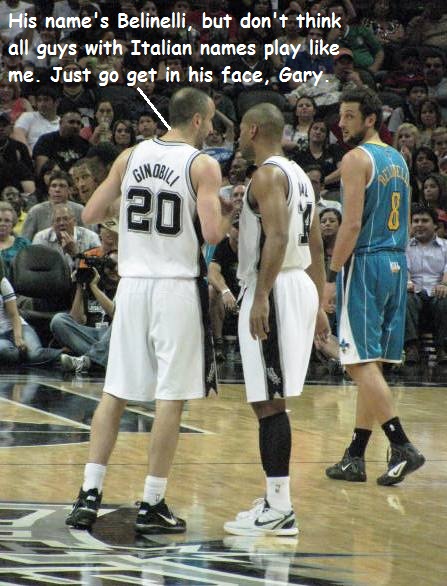 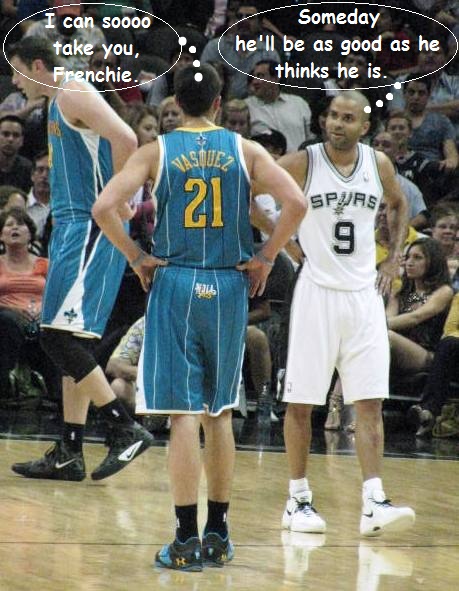 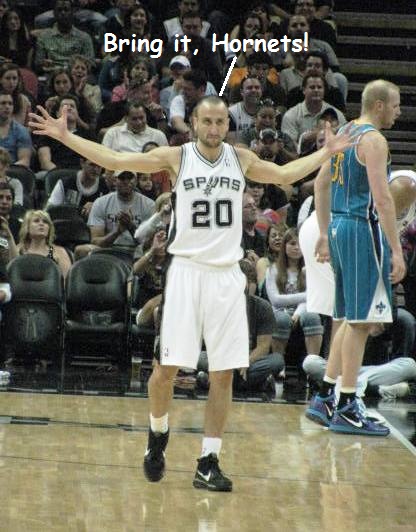 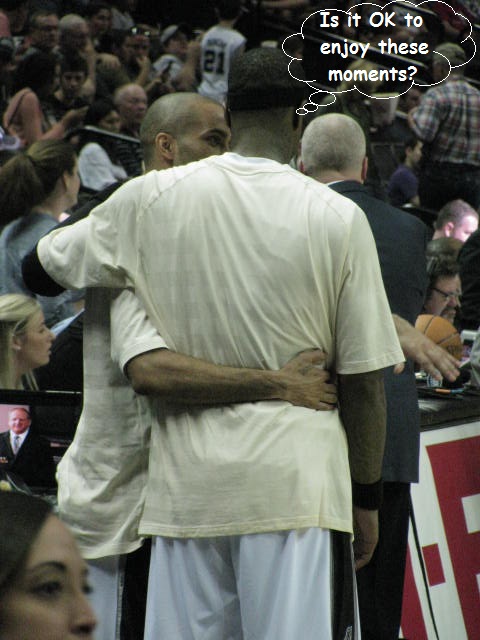 Oh - about that $11,000 - that was the price paid for Manu's game-worn, jersey-off-his-back in a postgame auction. Bids started at $1,000, but none went for that amount. Mills and Diaw sold for $2,000, Duncan for $9,000, Parker for $6,000. In all a total of $81,000 was raised for the Spurs charity Silver and Black Give Back. Each winner received the jersey, still soaked in sweat, in an Adidas travel bag. Then they were escorted to a hallway near the locker room to have the jersey autographed and take a photo with their player. 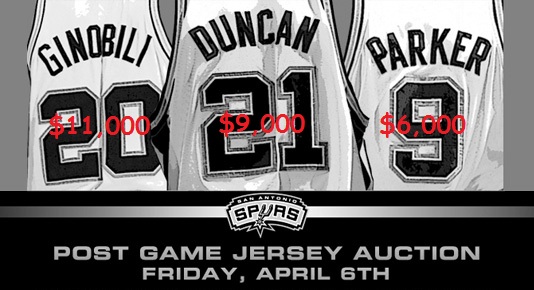 The way to the photo-op went through the new Spurs exclusive club for those privileged few who sit in the $1,500 a game seats at courtside. 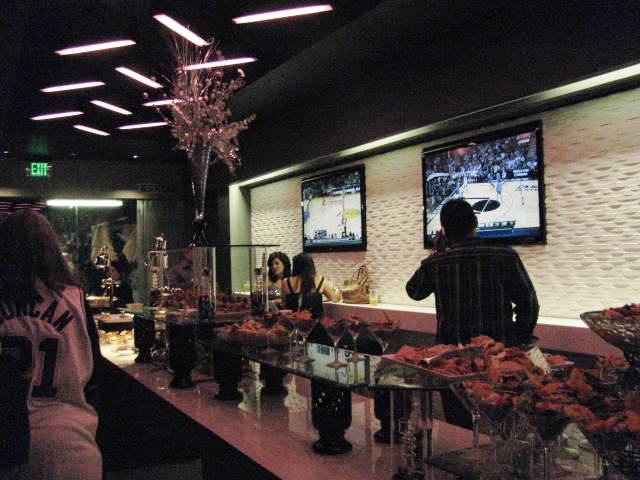 Friends Gloria and Will Drash bid on the first jersey up for auction, Blair's. Many people had not even gotten to their seats yet, and they won the bid for $4,500. Blair has become sort of an adopted grandson to them. His smile when he saw them in the hallway with his jersey was radiant. They were kind enough to take me along with them, and I snapped this photo after he signed the jersey. The background is a mural of fans that is on the wall as the players run to the court. A glass wall (visible in the back of the previous photo) separates the exclusive club from the hallway so those fortunate fans can see the players as they come and go from the locker room. 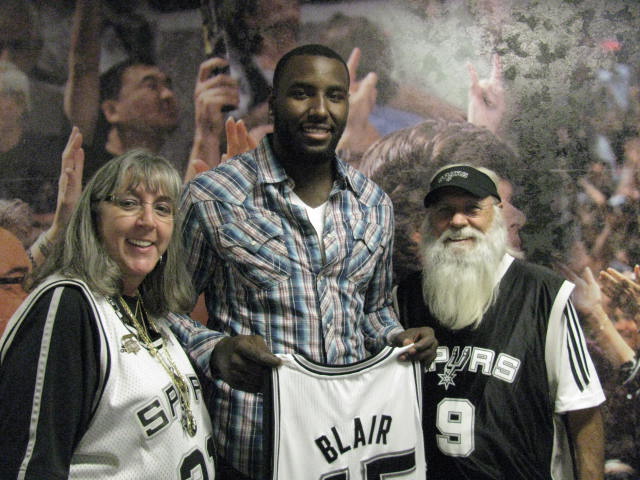