Spurs vs. Hornets: an unfair fight

Share All sharing options for: Spurs vs. Hornets: an unfair fight

SAN ANTONIO - You don't see numbers like these very often, especially from a Popovich-coached Spurs team. Well, at least that used to be the case. San Antonio completely wiped out an inferior New Orleans team 128-103, marking the second time in four days it has set a season high in points scored in a game (125 points against the Cavs on Tuesday). But it's not just the final score that's most impressive. Again, we've talked about this all season, so it should come as no surprise when I say the bench played very well. Still, the phrase "very well" is relative and subjective. When the Charlotte Bobcats play "very well" it might mean they lost by single digits (I'm about to replace the Bobcats with the Mavericks or the Magic when referring to terrible teams). I'm not picking on them, it's just a super young team that can take little victories out of a loss. As for the Spurs, saying the bench played "very well" might be an understatement. The eight reserves for San Antonio combined to score a staggering 82 points against the Hornets on Friday night, helping their team take over the top seed in the Western Conference.

Let's put this in perspective. The last time an NBA team's bench scored that many points in a single game, Y2K had just come and gone without the technological apocalypse that was supposed to accompany it. The Orlando Magic's reserves did it on Jan. 3, 2000, and not until Friday had it been done again. And the scary thing is the Spurs' bench is still growing as a unit. As presently constituted with the new additions, it's only been about two weeks since all pieces have been brought together. That's not a ton of time for players' styles to sync with those of their new teammates. But as Gregg Popovich has made clear, these are smart players who already knew the responsibilities they'd have in San Antonio.

"They knew their roles before they came," Pop said after the game. "They've been around and we know what they do. They were added to the team for specific reasons and they fit in very quickly, very well."

And while the Spurs historically haven't gotten a bunch of attention from the national media, they sure do wear off on the opposition. To guys like Eric Gordon, the Spurs' offensive brilliance seems almost mythical, like it's all some kind of folk tale.

"I heard they averaged 115 points recently," he said, referring to the statistic as if it were something from some basketball storybook. "That's just ridiculous." 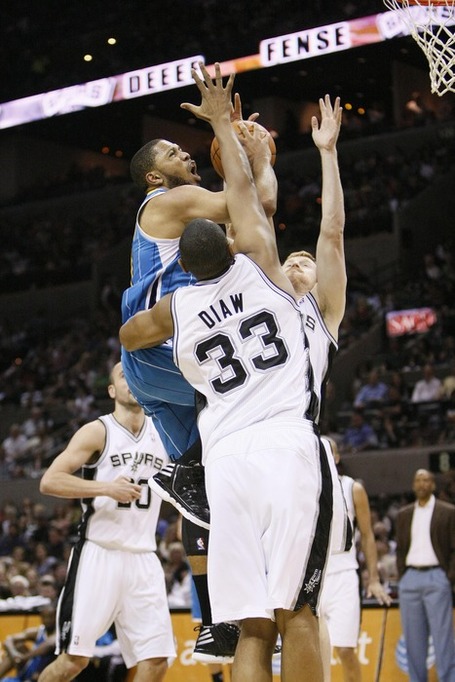 Boris Diaw's strong defense has been a bit of a surprise to some, including Gordon in this photo.

To be more exact, San Antonio has averaged more than 112 points per game over its last six games, and if you take out the 87 points scored against the Celtics (after that second half we should just do that anyway) the Spurs are averaging nearly 118 points since March 27. This offense is operating at a machine-like level right now, and teams residing in the cellar of the NBA have lost the game the second they step foot on the same court as the Spurs. I'm speaking figuratively, of course, but over the last week the Cavaliers and the Hornets have been as outmatched as a team can be in this league. Usually blowouts tend to be boring, but not this kind. You can't stop watching when San Antonio won't stop scoring.

"They have shooting, they space correctly, they execute out of timeouts ... defensively, they knew what we were running," former Spur and current Hornets head coach Monty Williams said. "That Spurs team is about as complete as any team I've seen. They have four or five guys that can run pick-and-roll.

"That team is primed and ready to contend."

Just as the Cavs team the Spurs played a few days ago are, the Hornets are bad. With all the adversity that franchise has faced in recent years, their tenacity is commendable and certainly a product of Williams' coaching. But this is an inferior team to San Antonio, and the Spurs are doing what is expected of them as the better of the two. Maybe not to this extent, however. These games haven't even been close, and Friday night's game was the epitome of domination. Six players scored in double figures again for the Spurs with Tim Duncan's 19 points leading the way. Five bench players - Manu Ginobili, Stephen Jackson, Gary Neal, Patrick Mills and Tiago Splitter - scored at least 10 points and each of the 13 active players scored five points or more.

All along, this team has been fun to watch. The Spurs play in an up-tempo, unselfish, free-flowing, high-scoring offense, and the minutes are spread as evenly around the bench as they are among the starters. I mean, Tony Parker played less than 17 minutes on Friday. Everyone plays and everyone can score, pass, shoot or defend ... if they don't do all four things well. Yet, San Antonio is still secondary (if not tertiary) in the eyes of much of the national media. The "they're old, slow and boring" excuse has been used to no end over the last decade-plus when speaking of why the Spurs don't draw big ratings on television. Not even the whole "winning championships" thing was enough to command attention. But now the Spurs are no longer any of the three things that comprised the nation's primary reasoning for dislike or Spurs apathy. They're not old (average age 27.6, and that's not counting 20-year-old Cory Joseph), they're not slow (94.5 possessions per 48 minutes, eighth best in the NBA) and they're not boring when they're scoring 128 points in regulation. Yes, the individual fan's excitement is relative and completely qualitative, but these statistics sure do suggest the Spurs meet the criteria of a team that should be popular nationally and not just in San Antonio. But they're not and that's just the way it is. And that won't change, because the NBA's all about the superstar. 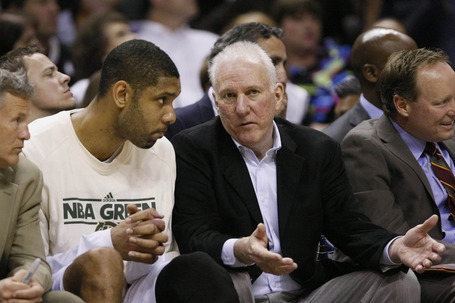 Pop: "So I says to the guy..."
Coach Bud: "(Hah! That darn coyote. He'll never get that security guard to dribble that ball.)"

And I'm not bringing this up to harp on it or try to garner more attention. It is what it is. At times, basketball itself is only as entertaining as its players are off the court, and this is a league full of personalities. They can be the entitled, immature, ego-maniac sort, or they can be philanthropists and ambassadors of this game, but either way fans just want that entertainment factor. There is no entertainment factor off the court in San Antonio. The Spurs are mostly close to the vest, modest and humble, and the few who are potentially volatile just fall in line behind Pop and embrace their role on the team. Not a lot gets out to the media and not very often is one of these guys in the news for the wrong reasons. While fans of any kind love it when the spotlight is on their team, San Antonio thrives out of it. The Spurs are happy to keep it quiet and let others absorb the bright lights. I know most Spurs fans crave the validation they feel ESPN can provide, but it's not part of the package here in south Texas and everyone should know that by now. Besides, the winning will eventually speak for itself.

And remember, that first-round loss last year is still pretty fresh on the mind of many Spurs critics. They saw a similar regular season from a new-look, high-octane Spurs attack that culminated with an injury to Manu Ginobili and an early playoff exit at the hands of the Memphis Grizzlies. With the Spurs, success at some level is expected during the regular season, but doubters are still in wait-and-see mode as the playoffs approach. San Antonio must once again prove itself in the playoffs. And that's fair for a franchise that measures its success by nothing less than a championship.

Those who follow this team closely have seen its capabilities ... the rest of the country will have its chance.

- The Spurs set season highs in first-half points (72), points after three quarters (99) and total points (128), and they tied a season high with 31 assists.

- San Antonio outrebounded New Orleans 40-29 and outscored it in the paint 58-44. The Spurs' biggest lead was 32 points while the Hornets went up by one point early in the game.

- Jackson played the most minutes of any Spur (24:50) and really seems to be coming into his own. He has control of the offense to the point where he's the primary ball-handler at times within the flow of the system. His ability to shoot, pass and defend, as well as take smaller players inside with his size are becoming major assets.

- The depth of this team is simply amazing. While there are others with strong benches, it's hard to imagine an overall deeper team than San Antonio. When the 13th man off your bench is James Anderson you know you're doing OK. The Spurs will be a nightmare matchup for anyone they come across in the playoffs, and now, as they sit atop the Western Conference, the conversation of them being favorites to reach the Finals has to be growing louder.

- Loved this quote from Stephen Jackson, speaking of Pop's influence on the Spurs: "You couldn't have a better coach with the talent we have."

Stars of the game:

- Parker was the tone-setter in this one, getting some shots up early and facilitating in the time he did play. Particularly memorable were the dunks he set up for Kawhi Leonard throughout the game.

- The cerebral big man was steady once again. He only played 20 minutes, so the point total is impressive. As is the norm, he and Tony set the tone from the start.

- The reserves combined to score 82 points and ran the Hornets out of the gym. Enough said.