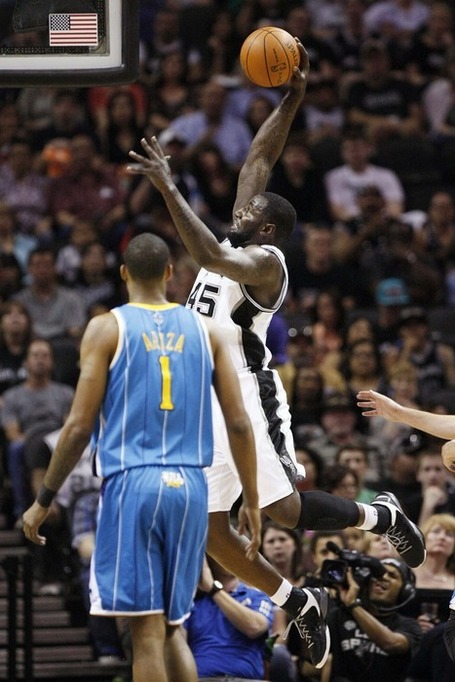 Spurs start out shooting 100% on their first handful of shots. Eric Gordon plays for the first time for the Hornets. He seemed rusty, missing badly on his floaters and jumpers. Kawhi Leonard comes out of a timeout SLAMMING a dunk on 7 foot tall Chris Kaman. DeJuan Blair also active on the ball, leading fast break steals. In the last few minutes of the 1st, we saw Stephen Jackson and Boris Diaw show great production off of the bench. Spurs up 34-24 after 1.

In the second quarter, the Spurs further the lead more with outstanding bench play from Patty Mills, Boris Diaw, and Manu Ginobili. Mills' quick and flashy play extends the Spurs to a season-high half of 72 points. Spurs lead 72-45.

Spurs start the 3rd with familiar sloppy basketball. Lack of movement, lack of passing, Spurs turn it over a lot. Carl Landry was called for a flagrant 1 foul for following through on a block attempt on DeJuan Blair. It could have been called a normal foul and I wouldn't have been surprised. Patty Mills comes in for TP who banged knees against a Hornets player. TP seemed OK, but the lead was 22 at that point, so it was understandable. Manu Ginobili, Cap'n Jack, and Patty Mills ran both side of the floor. In one spectacular play, Jackson rebounded a ball, passed it to Ginobili who was at half court waiting for the pass, who then in turn pitched a bullet to Patty Mills for an easy fast break layup. Spurs up 99-73 after 3.