Share All sharing options for: Analyzing The New-Look Spurs

Last season the Spurs became an offensive juggernaut; a big departure from their grind-it-out, 82-76 wins of yore. It wasn't an easy transition for the team, but it's been a lot worse for the fans who were used to defensive dominance and methodical play to get wins.

This season has seen the Spurs go further down the path of being a team that wins mostly with offense and saves energy to play elite defense only when it's necessary. The early results have been fantastic, but not being content with staying the course and seeing where the chips might have fallen, PATFO decided to change things up, trading Richard Jefferson for Stephen Jackson and revamping the Spurs' deep bench by signing Patty Mills and Boris Diaw. The biggest upside to those changes would be the potential improvement on defense at the expense of offense: two better defenders were splitting RJ's minutes (Leonard and Jackson) there's Mills to relieve Tony, and Diaw can take on the defensive duties on face-up PFs. The other change most were hoping for was a shift from a 3-point heavy offense into a more diversified attack. After looking at some numbers, neither view seems to be crystallizing.

I should start by making one thing perfectly clear: ten games is nowhere near a large enough sample size from which to draw any definitive conclusions, but I believe that this is a good moment to see if patterns are starting to emerge. Let's first take a look at the defense.*

Before the All-Star break the Spurs were allowing their opponents 95.6 points per game (per Hoopstats). The last 10 games (since the trade) that number has only decreased to 94.6 points per game. Which is nothing more than a marginal improvement, especially considering that the team has gone 9-1 in that span. The defensive efficiency has improved only .03 points from 101.4 to 101.1 points per 100 possessions, and calling that marginally better would be a gross overstatement -- it's essentially the same as it was before. Opponents are shooting a slightly better percentage from the field since the trade/signings (.456 before, .458 since) but that number increases when looking at 3-point percentage from .349 to .368.

Defensive rebounding, though, has improved and some of that improvement can be attributed to the changes made at the small forward position. The Spurs SFs are grabbing 1.1 more defensive boards than before. The power forward and center position seem to have balanced out with the 5's getting a bigger share of the boards at the PFs' expense. Frontcourt positions are somewhat interchangeable in the Spurs system, but having Diaw and Jackson may have allowed Pop to go small more often, while luckily not suffering much, since the centers have picked up the slack.

After the additions, the Spurs are still a mediocre defensive team judging by most defensive metrics, but that has seen some improvement in the one area where it already excelled (defensive rebounding) with only a marginal part of that improvement attributable to the new faces. Again (and I can't say this enough) it's too early to make any solid conclusions, but it doesn't look like there was a quick fix to the Spurs defensive maladies; the team couldn't play anything close to elite defense for extended periods of time before, and it doesn't look like it can now. Fortunately, as J.R. Wilco pointed out earlier this week, the Spurs can play great D when it counts the most, which means they might have another gear to switch to when the going gets tough. Or they'll at least be able to get those close wins that eluded them in past years.

It's the offense, astoundingly, where the roster changes seem to be making the biggest difference. The new guys are considered solid at worst and above average at best on offense, but their limitations are well documented. Despite that, since the trade the Spurs have seen an uptick of 5 points scored from their pre All-Star break numbers and their offensive efficiency for the last 10 games is a ridiculous 124.4. That's 15.1 over their season average of 109.3 which is quite a jump. The Spurs are getting more points from the SF position, but Kawhi Leonard scoring almost 3 more per game in the last 10 games accounts for most of it, even after his shooting has come back to Earth a little lately. The new guys are contributing but not as much to really be the reason for the improved offense. 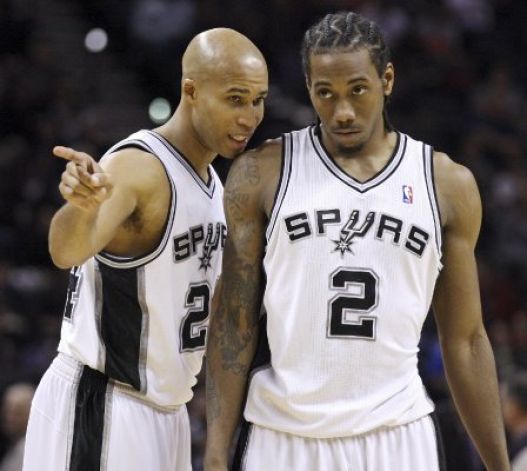 Go to that corner and make every open three or Pop will trade you. Trust me on this one.

Despite struggling from behind the arc since the trade, the Spurs keep shooting a lot of threes (23.2 attempts per game) as you'd expect from a team whose coach demands that the open man pull the trigger. So, now the question must be asked: how have the Spurs been able to maintain such potent offensive outputs even while struggling from deep? One reason is rebounding. Aside from being an elite defensive rebounding team, the Spurs have seen an improvement in offensive boards. This is due partly (I feel sure) to the increased number of long misses, but DeJuan Blair's and Kawhi Leonard's nose for offensive caroms cannot be understated (Kawhi is 3rd in offensive rebound rate among SFs playing 20 minutes or more).

The other two potential reasons for the improved offense are assists and field goal percentage. Neither has seen a huge uptick (the Spurs have been moving the ball well and scoring efficiently all season long) but as a team with so many offensive weapons, continuing to share the scoring burden is huge for this regular season. While Manu Ginobili and Tony Parker have been rather pedestrian since the new guys arrived, the Spurs other star has managed to make up for it with the help of a couple key role players. Tim Duncan, Kawhi Leonard and Danny Green have upped their scoring figures by a combined 9 points over their season averages. Those big scoring surges coupled with the smaller ones from Gary Neal and DeJuan Blair have allowed the Spurs to put points on the board at a higher rate than before, even though their two best perimeter players have struggled and the 3-pointers haven't fallen.

The team hasn't actually changed that much. It seems that the roster tweaks have not helped make the team significantly better defensively. It's very possible that we have not only overrated Stephen Jackson's efficacy, but also Kawhi's as well -- and the Spurs still don't usually have two above average interior defenders on the floor at the same time.

The defense seems to be just good enough to hold off other teams, while the offense finishes them off. And that's been the case all season. On offense, the Spurs have been surviving their woes from deep by getting offensive boards, sharing the ball and relying on role players to step up and cover the stars when they are struggling.

Why that scares me

I've been a vocal advocate of this team's need for quality 3-point shooting and that goes double for the playoffs. Teams will pack the paint against the Spurs, taking away Tony and Manu's dribble penetration and soft-doubling Tim. If the shooters struggle, the Spurs will struggle. I mentioned Kawhi Leonard as at least a partial reason for a lot of what has been successful recently, but expecting him to maintain that production in extended minutes as a rookie might be too much to ask. In fact, the last couple of games have seen a drop in production from Kawhi which has some concerned that he may be paying a visit to the rookie wall.

For all the talk about the depth of the team, Pop seems to be leaning to shorter rotations lately with Diaw and Mills getting DNP-CDs for 2 of the last 3 games, and only playing in the blowout against the Cavs. The team is deep but having the best 11th man of any playoff team doesn't get you that far.

Manu and Tony need to join Timmy in playing like difference-makers again. The role players are expected to struggle a bit more in the playoffs, so the stars will have to play at the level we know they can.

Unless Tony and Manu can provide consistent scoring, the Spurs won't get to 16 wins in the playoffs, depth or no depth.

Why I'm actually not that worried

Did I mention it's too early to panic about the negative trends? I have? Cool.

Granted, it's crazy to expect Kawhi Leonard to suddenly show Bruce Bowen's skill-set in a reasonable facsimile of Gerald Wallace's body, but the Spurs have other guys that can fill in when the rookie is overmatched/tired. Green, Jackson and Diaw can guard the guys Leonard is supposed to, while providing the same kind of high-energy and smart play Kawhi does. Those guys are not knockdown 3-point shooters, but we shouldn't expect Kawhi to be that either, his two-month hot streak notwithstanding.

The Extraneous G might not be too fond of long rotations, but having the horses to match up with any team means that he won't have to rely on a limited role player that doesn't have a good match-up for long stretches (I'm looking at you Matty). The Spurs might use a 9 man rotation but those 9 men don't always have to be the same.

Manu and Tony have been deep in the playoffs before and they know what to do when they're in there. I have no doubt that they are reserving energy and they'll pick up their scoring and continue to distribute the ball well. When you add those two to Rejuvenated Timmy and some quality role players, like the Spurs have showed in 2003, 2005 and 2007, baby you have a stew going!

As far as I can tell, the Spurs are similar to last year's team, but not really the same -- if that makes any sense at all. There are more weapons on offense. There's more versatility on defense. And while there still are some flaws (consistent 3-point shooting, lack of lockdown defenders) the unit as a whole is showing that they can overcome their shortcomings to play some pretty inspired basketball. Anyone that has read my previous posts knows that I'm not in any hurry to drink the Kool-Aid and go all-in with optimism on San Antonio's chances for the rest of the year. But I have to admit that I can see the Spurs continuing to be just good enough on D and still advance in the playoffs. I couldn't say that at the beginning of the season.

We might have exaggerated the impact the "new guys" are having on the team, but the truth is: the Spurs are good. As good as any other team in the league right now.

*Stats courtesy of Hoopstats, Hoopdata and Basketball-Referece. When pre All-Star break splits were available I used those instead of season averages since I thought those would be better to determine if the team had changed in the last 10 games.