Tonight the Spurs will face one of their toughest recent tests, as they play on the road on the second night of a back-to-back against a rested Celtics team that is surging at just the right time of the season. Folks who have written off the Celtics as too old are about as numerous as those who have written off the Spurs, but anybody who watched this Boston team spank the Heat the other day in front of a jubilant Garden crowd knows this will be a tough team to reckon with. Never mind that they were missing one of their big four, sharpshooter and longtime Spurs friend Ray Allen. Boston has had a lot of injury issues this season, but Doc Rivers and his savvy veterans, especially Paul Pierce and Rajon Rondo, have fought through and are currently sitting at fourth place in the Eastern Conference, on a five game winning streak and winners of seven of their last ten. And unlike the Bulls, Heat, and Magic, these Celtics have been to the mountaintop and actually, you know, won a title. The Celtics know how to get the job done when games really start to matter.

If you take a gander at the Celtics stats for the season, they are not all that impressive, especially on the offensive end where they have struggled. If the Spurs have become a great offense with an average defense, the Celtics are a great defense with a well-below-average offense. But, they are playing much better ball over their last twenty games. Since the All Star break, Boston is 15-5. They are still only scoring 95 points per game over that time, three points above their season average, but their defense has been stingy, holding opponents to 92 points per game, and they have only allowed 100 points or more four times over that stretch of games. For the season, the Celtics are 3rd in the NBA in points allowed at 90. Curiously, one area where Boston is a league leader on offense is in assists, in which they rank first at 23.6 per game, even higher than the Spurs, and a full 17% of their points come off of assists. One area where Boston has truly underperformed this year is in rebounding, perhaps the result of shipping out several of their stalwart big men over the past year. They are pulling down an anemic 38.6 boards per game, dead last in the NBA. 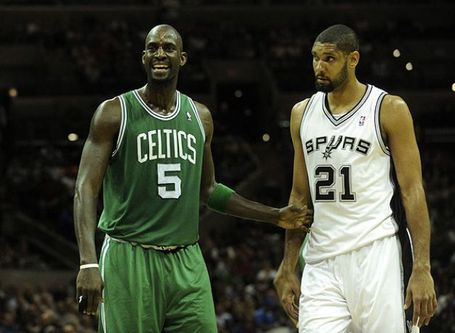 Like the Spurs, the Celtics have found a way to improve their team by giving playing time and experience to some of their young talent while filling in for injured veterans, and it promises to pay dividends going forward. Namely, second year guard Avery Bradley has started to really blossom as a player over these past couple of weeks as Ray Allen has sat with ankle problems. Bradley is a good defensive player, but his offense has picked up recently as well. My guess is that Bradley starts tonight, but Ray Allen is likely to play as well, giving coach Doc Rivers a one-two punch at shooting guard.

Of course much of the Celtics' offense begins and ends with Rajon Rondo and his growing all around offensive game, and with the deadly shooting of Paul Pierce. They have kept the offense afloat while Allen heals. Boston may not have quite the firepower down low that they did a few years ago, but their guards and wings are a handful, and will be a great test for the Spurs' perimeter defenders. Keys to this game: the Spurs need to break 100 points and take care of the ball on offense. Defensively, the Spurs must make life difficult for Rondo, stay cognizant of shooters when he penetrates, and control the glass.

Game Prediction: Spurs bring Celts back down to earth and win a close one.