SAN ANTONIO - In the NBA every team has a weakness. Yes, some have significantly more than others (see Bobcats, Charlotte), but you can generally identify the areas which need refining. For the Spurs, the difficulties they've had at times handling bigger teams, especially in the frontcourt, has supplied the team's critics - both good and bad - with the ammunition needed to present arguments against San Antonio's title chances. It's also enough of a supply that it's fueled the fire keeping the idea alive that the Jazz will be a tough out for the Spurs. But despite Utah's size advantage on the front line, the West's No. 1 seed comfortably put Game 1 in the books with a 106-91 win at the AT&T Center. And really, it shouldn't have even been that close. The Spurs didn't play that well, and I don't believe this series is going to be as close as many are being led to believe.

We've seen the previews heading into this first round series between the Spurs and Jazz illustrating Utah's relative inability to defend the pick and roll, and when you consider how prevalent that single play is in the Spurs' arsenal it's difficult to give the underdogs much of a shot. And with that little scouting report in hand, it's easy to guess how San Antonio attacked. Tony Parker picked up where his regular season left off, probing and attacking off dribble penetration and finding open shooters on the perimeter. But his ability to score inside among the trees was on full display in the opening game of the Spurs' 2012 playoff run as the team's MVP put in 28 points and dished out eight assists in just more than 36 minutes on the court.

"I was just trying to be aggressive and wanted to see what they were going to do on the pick and rolls. So at the beginning of the game I tried to set up my teammates and tried to be aggressive after that," Parker said at the podium following the game. "I thought overall we were pretty aggressive. We have to match their energy. They're a very physical team with a lot of intensity.

"It's going to be a war the whole series."

So, I guess 'aggressive' is the key word here. And it was obvious. Even with the vaunted size of the Utah interior, Parker and San Antonio wanted to force the issue and do what they do best: drive and kick. But outside of Parker and Duncan's efficient 17 points and 11 rebounds, the Spurs were a little off. Their 35 percent shooting from the arc and overall 47 percent shooting were below average, and they lost the rebound battle by a count of 45-39. Yet, they still won by 15 points as the Jazz never put a real scare into the home crowd.

"It's always very important to start winning, because if not you're always fighting from behind. So we needed this one," Manu Ginobili said afterward in the locker room. "We played a pretty good game. It wasn't brilliant, but it was steady and we kept fighting. It took us a while but we broke it in the fourth quarter." 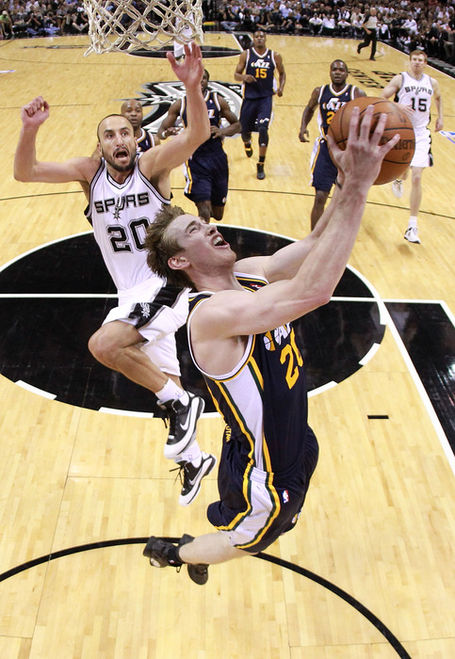 (Insert your own caption here. Seriously, I want to see them in the comment thread, because I have no words.)

As the third quarter was winding down, Gary Neal, Stephen Jackson and Matt Bonner hit a three-pointer apiece in a span of about two minutes to send the young Jazz into the fourth quarter facing a 15-point deficit, the largest of the game to that point. As Manu said, it took a while (prior to that 3-pointer streak the Spurs were 2-for-11 from deep) but it eventually opened up for the better team. Jackson, who said he's been building up his stamina since the Spurs acquired him, was a steadying force off the bench. He pitched in 14 points and played his always disruptive brand of defense in a game where San Antonio struggled to find offensive consistency. And he couldn't be happier to be back in the postseason with his old team.

"Oh man. It's the best feeling in the world. It's what I live for. It's a blessing to be part of the playoffs again," Jackson said to reporters. "If you don't get up for this game you can't get up for any game. So I'm just happy to be here."

To see Jackson back in the playoffs isn't just a joy for him, it's also a joy for the fans in San Antonio. While the 33-year-old swingman has been much-maligned at times, he's always remained competitive through some trials and tribulations over the last decade.

"Everything I've been through did nothing but make me stronger, make me a smarter guy, a smarter player. So I appreciate the good and the bad," he said. "But just being back here is sweet, and to hear those fans and to have this jersey on is definitely special."

But the bench contributors - Neal, Danny Green and Kawhi Leonard - we've become so accustomed to seeing exceed expectations, didn't quite do that today. The three combined for 13 points and did not shoot the ball well. And we've been waiting to see how these guys handled the playoff spotlight, maybe with the exception of Neal. It's only one game, and Kawhi still contributed on the defensive end as he usually does, but we once again saw how crucial the health of the Big 3 is. The Spurs go as they go, just as it's been over the last decade-plus. And Parker's amazing year just continues.

"That's the reason why everybody's chanting, 'MVP,'" Jackson said. "He's the leader of this team. He leads us on offense, gets us going. He also kept me focused when I got fouled and kind of got upset.

"He got me back in the game, and that's part of being a leader."

With Parker playing at this level the Spurs will advance easily past the first round. And as for all that chatter about this being a difficult matchup for San Antonio, I think you can forget about all of it. The Spurs are about to show why they're on a completely different stratosphere than the Jazz.

(If I'm wrong, I'll prematurely accept the status of scapegoat right now...just in case. But I'm not too worried about that. I'll sleep fine tonight.) 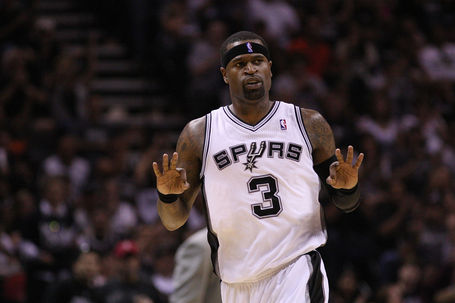 Weaknesses aren't always necessarily, well, weaknesses. What I mean by that is, teams might have areas of their system, roster and game that are less efficient than others, but that doesn't exactly mean those specific areas are weak in themselves. When you look at the Spurs, you automatically and immediately point to the appearance of frontcourt deficiencies when up against the Lakers, Grizzlies, Jazz and the rest of the league's "big teams." But the reality is, size affects every team. It's not like the Spurs' front line is the only one that has a difficult time against Andrew Bynum and Pau Gasol. Size affects EVERYONE, just to varying degrees.

The reason you hear and read so much about this in regard to the Spurs is because it's virtually the only easily identifiable weakness this team possesses. While most teams have a handful that you can pour over and pick apart, there's a bright, magnified light shining brightly on San Antonio's weakest link when prognosticators concoct ideas for what might cause a Spurs demise. No, the Spurs' big men aren't physically intimidating, nor are they superior athletically, but they are diverse in what they bring to the table. Gregg Popovich can match up with virtually any lineup of bigs the opposition throws out there and he can do it effectively.

Take today's game for example. Pop elected to start Boris Diaw against the similarly sized Paul Millsap, and though Millsap still ended up with 20 points, one might imagine Tiago Splitter or DeJuan Blair would have had a more difficult time containing the active Jazz forward. Not to mention, Diaw's defense has been quite the pleasant surprise for his new team.

"We didn't know he could do the things he does defensively on a variety of different positions and people," Pop said about Diaw prior to the game. "He's done a really good job. It was a little bit of a surprise to us."

And just as he has the luxury of using the smaller, quicker lineups, Pop can still put two 6-foot-11 players on the floor against the giants of the NBA if he pleases. Tack on Matt Bonner - whose strength and defensive ability continues to be vastly underrated - and his shooting ability, the Spurs' frontcourt is dynamic despite its shortcomings. And when you look at stats that are generally at least partially dictated by physical stature, let's say blocks and rebounds (I know other variables come into play for both statistics), while the Spurs don't block a lot of shots with their relatively low level of athleticism among their big men, they have the highest defensive rebound rate in the league. In other words, they grab a higher percentage of defensive rebound opportunities than any other team in the NBA. So when the opposition misses a shot against the Spurs, which they do 54.8 percent of the time, San Antonio snags the rebound 76 percent of the time.

The Spurs' first-round exit last year to the Grizzlies provides a convenient argument for critics looking for a reason to pick against the Spurs. The "easy" rationale is that the Jazz, like the Grizzlies, boast a strength against an apparent Spurs weakness. But don't make the mistake of thinking this Utah team is on the same level as last year's Memphis team, and be very sure you don't make the mistake of comparing this year's Spurs team to the 2011 version. Don't fall into that trap that claims the uneducated, less-than-studious NBA onlookers who proclaim to know about this San Antonio team. Memphis of 2011 was tougher, more well-rounded and significantly more dangerous in the backcourt, a relative weakness of the Jazz. Utah's bigs are talented, energetic and youthful, but even their size isn't what the Grizzlies possessed. Not only that, but the skill set of that Memphis front line was more versatile and developed. 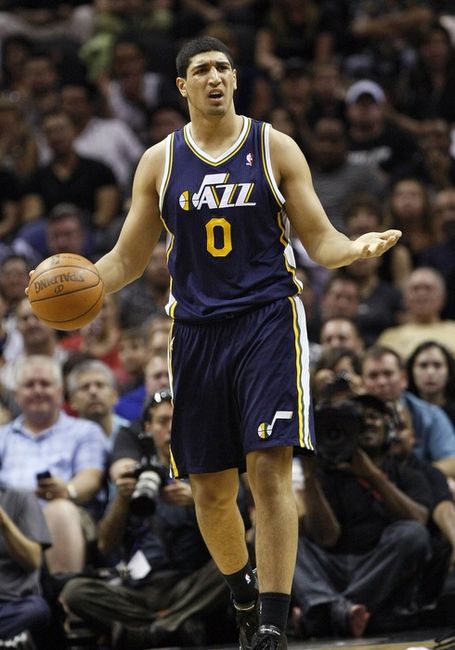 "Enes thought playoffs supposed to be fun, coach. Enes not having fun."

It's fair to point out the struggles San Antonio has had at times against imposing size, but don't let it be overblown. Utah is no doubt talented up front, but its backcourt leaves much to be desired. The Jazz are a team of the future, not the present, and I think many Spurs critics looking for ways to pick against this team know that deep down.

Really, It's just that they refuse to believe the truth that sits right in front of their eyes, that makes itself so evident game after game. The Spurs really are this good.