Here it is. The playoffs. The NBA's second season. The time of year when you no longer have easy games against bad teams. Well, unless you're in the Eastern Conference. The Spurs, having just completed their 13th 50+ win season in a row, will face the Utah Jazz in Round 1 of the 2012 NBA Playoffs. The Jazz beat out the Suns and Rockets to have the honor of facing a San Antonio team that has been straight rolling. As opposed to curvy rolling, which is much less desirable.

I enjoy music, but I'm not a music buff. I've never really played an instrument or been accused of having any special musical talent. That said, I can still appreciate those who are both talented and skilled in the art of making beautiful music, like Jazz. Utah has long been known for it's storied history of being a Jazz hot bed and had the wise idea to name it's basketball team after the beloved style of uniquely American music. When asked what first comes to mind when somebody says "Utah" or "Salt Lake City" the first thing that pops into my head is Jazz.

Clearly, I'm being facetious. Utah has one of the least appropriate named sports teams in all of America. The Jazz having be born in New Orleans, which makes perfect sense, moved to Utah in 1979. For some unknown reason the team was not renamed. That's as bad as having a team named the Lakers move from Minnesota (land of 10,000 lakes) to LA (land of no lakes) and not renaming the team. But I digress.

Looking thru the wikipedia page about Jazz, one can quickly get lost in both the history and depth of this music. There are debates about what the definition of Jazz is and where it originated. That's all well and good, but all I care about is the music. Here's an excerpt that I found interesting:

In jazz the skilled performer will interpret a tune in very individual ways, never playing the same composition exactly the same way twice. Depending upon the performer's mood and personal experience, interactions with fellow musicians, or even members of the audience, a jazz musician/performer may alter melodies, harmonies or time signature at will. European classical music has been said to be a composer's medium. Jazz, on the other hand, is often characterized as the product of egalitarian creativity, interaction and collaboration, placing equal value on the contributions of composer (if there is one) and performer, 'adroitly weigh[ing] the respective claims of the composer and the improviser'.[8]

Sounds a bit like basketball, no? For those of you who are not familiar with the smooth tunes of Jazz, here are a couple of songs to enjoy:

Recently, it's been the Spurs who are making beautiful music in the NBA. The Spurs record is 50-16. Tied at the moment for the best record in the NBA. Consider this: San Antonio started the season off at 12-9 after that famous overtime loss to Dallas on January 29th. Since that time the Spurs have gone a whopping 38-7. That's a winning percentage of .844. Think about what would have happened if the Spurs wouldn't have rested their best players for several of those losses. Even when the Spurs left Manu, Duncan, Parker and Neal at home, the Spurs managed to pull two wins out late in the year on the road to secure San Antonio's 13th straight 50+ win season. 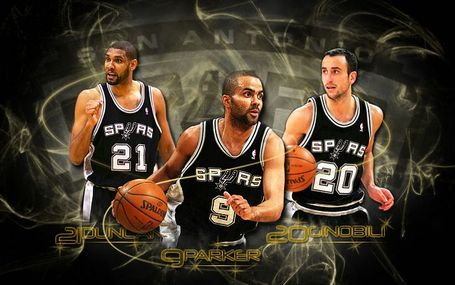 Utah having played themselves into the playoffs for the first time since Jerry Sloan was leading the team. I'm not sure what the Jazz were expected to do this year, but after trading Deron Williams away last year and having Sloan leave, I can't imagine Utah was expecting to do a whole lot this year. They've got a very good front court that has help the Jazz become a solid offensive team. They are long and have shooters that will make you pay if you start double teaming the big guys. Al Jefferson has the 12th best PER in the league. Ahead of Tim Duncan at 14 and Tony Parker at 16. Manu Ginobili has the 7th highest PER and Paul Milsap checks in at number 20. The Jazz do not have the depth of the Spurs, but they've got some solid players who will be capable making this Spurs team earn everything. If Harris, Miles or Hayward get hot, it could be trouble for the Spurs.

San Antonio is 3-1 against the Jazz this season. The lone loss coming on a ridiculous home and home, and on the second night of back to back games when Tony Parker, Manu Ginobili and Tim Duncan didn't even travel to Salt Lake City. The Jazz won that game by 7 points. The Spurs average margin of victory was by over 9 points per game. I'm trying to not get over confident about this series, but I just can't do it. I don't think the Jazz will have enough to deal with the Spurs starters and the difference in depth is astounding. The Spurs should take a lesson from the oft talk about 1st round series from last year and come out aggressively. San Antonio is just a better team and they need to squash any hope the Jazz have early and often.

Your Spurs are rested, healthy and ready to roll. The playoffs are here folks! Let's get this started.

I'm not sure how the lineups will play out, but this is how I foresee things going down. Blair generally plays well against Utah and I expect him to start and play significant minutes. I'm sure we'll see plenty of Splitter as well. The bench will of course be key. I also expect Parker to be a big factor.

Spurs should win this by double digits. However, I see a bit of rust for the big 3 and the Spurs will win by 5.