Share All sharing options for: Fraternizing with the Enemy: SfS and Amar of Salt Lake City Dunk discuss Spurs/Jazz

The Spurs begin their playoff journey tomorrow, but what will be a running, series long dialogue between Amar and I begins today. To get things started, I asked him a few questions, and his answers are below. His questions for me and my answers can be found here. Go forth, read, and as always, enjoy responsibly. 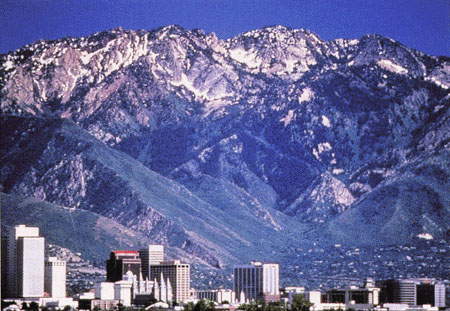 Going in to the series with the Spurs, what are your expectations? Do you foresee an upset, and if so what weaknesses do you see on the Spurs that Utah can exploit?

To be honest, when you are the 8th seed and you need three or four teams to collapse just to get in (Houston died down the stretch; Phoenix was a fair fight; Portland blew everything up; and Minnesota lost Ricky Rubio for the season) - you don't have a lot of expectations for your team. Specifically when you are playing a team that won 50 games in a 66 game season. As a point of reference our Head Coach Tyrone Corbin has only 44 career wins, which is a smaller number than what your team got in just one year.

I expect our team to experience that "virginal playoff shell shock" for one game, all teams that make the jump from the lottery to the playoffs have to have that game. It may be Game 1 or Game 2 depending on how hard to Spurs want to take it at the Jazz. I also expect our team to compete hard in all the other games. We're not in the same class as the Spurs, so the Jazz aren't a serious threat to upset your guys. No matter how circumstantial the similarities are, this Utah Jazz team is not like that Memphis Grizzlies team from last season. No upset on the horizon here.

That said, the Jazz and all their flaws can still take a few pages out of the Grizzlies' book and make life hard on the Spurs. The Spurs have beaten the Jazz so many ways this season (and the last 7 seasons if we're being honest). The one way that Utah's defense seems to never really pay the price is when defending your bigs. The Jazz can and have lost when not trying to inhibit Tony Parker and Manu Ginobili's dribble penetration. This dribble penetration usually ends up with a Spurs player taking an unguarded spot up three pointer. It's not just the game plan against the Jazz either; 53% of the Spurs entire offense this current season has been either an Isolation; Pick and Roll; or a Spot up jumper. That number is only going to increase in importance and quantitative number against the Jazz - who seem to have no idea how to handle it.

The one wrinkle is that the Jazz have spent the entire last week (you know, something that should have happened in training camp, but you know, lockout) fixing their pick and roll defense. I hope that this new defense and a conscious decision to let the bigs beat you should make a difference in at least one game before Pop makes the right adjustment for the next game. Your guards kill us on the drive, and from deep when open. The Jazz need to try to get the ball out of the hands of your guards, and create the illusion that your bigs are open. And because your guards are unselfish and play the right way, they'll get the ball to your seemingly open bigs.

The end result is falling into the new Jazz trap. The Jazz only strength is inside. And their major quality depth is also inside. The need to make the Spurs bigs beat them. Fouling Parker (92 ft%, 8.3 FTA vs Utah this year), or Manu (93 ft%, 7.5 FTA vs Utah this year) is folly. Fouling Tiago Splitter or DeJuan Blair on the other hand? That needs to be the point of attack. Jazz new defensive adjustments on playing the drive, while staying home on the shooters, should create a vacuum for your bigs to go to. And the Jazz players have enough bigs to challenge them then.

If the Jazz can get the Spurs to play the Jazz game, it could work in Utah's favor. And again, I understand that this ‘ploy' will only work for a maximum of only one game. Or until Boris Diaw becomes the cutter who gets the ball and starts making fancy French passes that cut our team apart.

As an outsider, I've been very impressed with Utah's improvement/maturation this season. I think Corbin is a really good coach. I like to make fun of Al Jefferson a lot, because his post iso's take forever to develop, but even he seems to have turned a corner recently and is playing a a much quicker pace. Millsap is the best "tweener" forward in the league, hands down. What makes him so successful, and do you see him having a bigger impact as a SF or a PF?

First of all "thank you," we feel that Corbin can become a very good coach in this league. He has paid his dues, and been around a lot of different programs in his career. That said, he still makes ‘rookie coach' mistakes at times. But his improvement over this season is remarkable. And the Jazz record under him from last season to this season reflects this.

Big Al has similarly made strides to become a more complete player on offense. One of the biggest realizations that players have to have when joining this team (and I'm sure you hear it when Free Agents or traded players join the Spurs too) is that "I didn't know that if I passed the ball I would get the ball back at some point during the same play." That's not a direct quote from any single player, but it's a realization that Al (and many others) have had after joining the Jazz. Since Al recognized that passing didn't mean giving up the rock for good he's been more willing to pass to guys. And it has helped the team. Particularly because passing is contagious. This Jazz team is a lot more capable on offense when the ball goes into Big Al and guys around moving around and he's looking for cutters vs. passing the ball into Big Al and he reverts to "Minnesota Mode" and eats up 7 seconds on the shot clock without even making a legit move to get his shot off.

Now Jefferson can get the ball, pivot/face up and start his initiation sequence *and* also notice that he can abort this sequence at any time to fire a pass to a cutting team mate. The primary beneficiary of this has been Paul Millsap. Some Jazz fans like to play this up like they have a budding ‘bromance,' there is even a fan made YouTube of their highlights set to a Bryan Adams song. Yes. It's been that kind of year in Utah.

Millsap would probably have been an All-Star by now if he was 2 to 3 inches taller. That said, Millsap probably wouldn't have slipped to the late second round if he was, and thus, never a Jazz player. He was just an energy guy, hustle player when he first got here but he was intrinsically motivated to make himself better every year. And he has. He's a throwback who plays hurt and does all the dirty stuff - while still adding new facets to his game. Al Jefferson has taken Enes Kanter under his wing, teaching him post moves. It would be great for Paul Millsap's work ethic and drive rubs off on Derrick Favors. 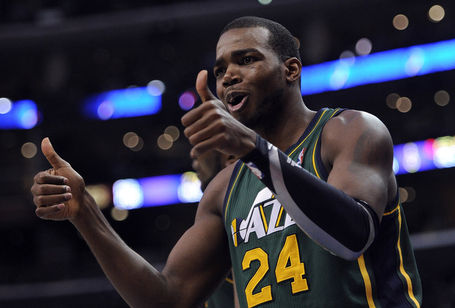 Thanks, Amar. I dig you too, man

It's this drive that makes Millsap so successful. He was such an incomplete player when he joined the team. He couldn't make free throws. He didn't have any range on his shot. He was always fouling. And he didn't have any ball handling skills. For the most part he's fixed all of those gaping holes and become a much more complete player now. And he did so on his own, it's not like the Jazz had a special coach assigned to him, or developed him at all. Millsap is a self made player, like I said a throwback. Millsap can be effective at either PF of SF because he creates mismatches. Against slower, taller guys he is more apt to face them up and take them off the dribble / set up his step back jumper from midrange. Against weaker, faster players he'll back them down. Of course, the problem of living off of mismatches is that on defense they work against you. This year Millsap has had to guard everyone from DeMarcus Cousins to Kevin Durant at times. Those players clearly turn the tables on the mismatches. There is a ‘sweet spot' where Millsap excels. I'm pretty sure that a smart coach like Pop will make sure to put line ups out there that take him out of his sweet spot (Put Tiago on him, instead of Blair; or put Leonard on him and make Paul chase him around).