Well, this has been an interesting regular season, hasn't it? It draws to a close tonight in Oakland. Many of us may have a hard time focusing on this game without peeking ahead to the first round of the playoffs. But somehow I feel that the Spurs themselves will not be looking ahead, or behind. They have shown a remarkable ability over the course of this season, and particularly over the last month, to approach each game with a great deal of focus. They don't seem to get too rattled by the score, the opponent, the standings, who is sitting this one out, who is starting. They also don't seem at all worried about some freak accident altering their destiny. They just go about their business, calmly eviscerating another team before heading back to the locker room for cookies and milk.

Mark Jackson's Warriors are 23-42 on the year, hovering in the cellar of the Western Conference. I'm sure Jackson did not envision that kind of record when he took the job. The Warriors are near the bottom of the league in several categories that cannot please him. Their defensive efficiency ranks 27th at 106 points per 100 possessions. Their rebounding rate is at the very bottom of the league, an anemic 46.1. Offensively, things look more promising for the Warriors. They play at a fast pace, rank 9th in assists per game, 8th in turnover ratio, 6th in effective field goal percentage at 50.5. On the other hand, they lost quite a bit of offensive sizzle when they traded fan favorite Monta Ellis last month. David Lee, Nate Robinson, Andris Biedrins and Dorell Wright all sat in their narrow loss to the Hornets on Tuesday, and I expect they will all sit tonight as well. This will be a battle of the benches, so it's hard to say if any of the above season stats mean much.

Tanking. Some people are getting really worked up about tanking, the perceived act of quitting on the season so that you have a terrible record and get a better chance at a great lottery pick. ESPN is, for some reason, on a crusade to end tanking, flopping, and tooth decay. One guy who complains a lot about tanking is Jeff Van Gundy, although I notice he has never called out his old broadcasting partner Mark Jackson for tanking, and if any team in the league can be accused of tanking, surely the Warriors qualify. Me, I think it's more complicated than many talking heads are making it. Sometimes teams are just bad. Sometimes even pretty good teams just don't have enough stuff to win games. It's a fine line. When you lose enough games, you can forget how to win. You can lose belief. It snowballs. Let's give these guys some credit. Winning games is not a mathematical equation, whereby you just add up all the talent, draw up a bunch of precise and brilliant plays, and then, bingo, you win. The actual world is not a fantasy league.

Richard Jefferson will likely start tonight. Let me say this about RJ: The Spurs have won 49 games this season. 28 of those wins came with Richard Jefferson starting at small forward. That means something. The Spurs also topped the Western Conference last season with Jefferson starting on the wing. I know many people, including Jefferson himself, were none too happy about his performance as a Spur. I know many of us Spurs fans are giddy that we managed to trade him for Jackson, and this sense of euphoria is understandable. Stephen Jackson is looking primed to make the kind of difference in the playoffs that Jefferson never did. Yes. But I will be thinking about RJ as I watch tonight. He is a good guy, a good teammate. Watch the way his former teammates interact with him; I bet you're going to see some love. In a weird bit of irony, the Spurs are winding up the season visiting Jefferson's new team, their last stepping stone on the way to what many expect to be a deep playoff run, the best chance the Spurs have had at a title in years. If the Spurs make a finals appearance this year, I don't see how Jefferson can feel anything but disappointed, like the train left the station without him. I hate that. Even if it had to happen, I still hate it. Jefferson did contribute an awful lot to the Spurs over the last two seasons. Maybe not as much as we or he would have liked, but his presence on the team mattered. I hate the way it shook out, and I wish RJ the best in Golden State. Another year of continuity, a good young player in the draft, a healthy Stephen Curry, David Lee and Andrew Bogut, and next season may be a very different one in Oakland. I want that for RJ.

But that's next season. This regular season ends tonight. For the Spurs, I could not care less about winning this game. I want them to: Play the game without thinking what comes next. Give tired bodies some rest. Keep the rhythm going. Keep sharing the ball, keep honing the defensive rotations. Give the Warriors the same respect they have given every opponent this season. Give minutes to those who are still getting acclimated. Then go to the locker room and have some cookies and milk. 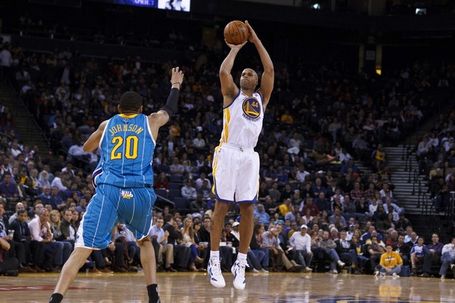 Game Prediction: If Golden State plays with as thin a roster as it did Tuesday night, Spurs win by 10.