With the top seed in the West already secured, the San Antonio Spurs head into their final games in Phoenix and San Fransisco with the freedom to compete or coast high above the fray. With last night's 100-88 loss to the Jazz, the Suns have fallen short of their playoff aspirations and this season finale will be a bit of an anti-climax for the home crowd. The Spurs are playing for practice and Finals homecourt while the Suns only have pride to play for. Even if SA's big three rest and Phoenix's veterans play, momentum and motivation could keep the Spurs rolling and collecting wins that they can still put to use with the right eventual playoff opponent.

Duncan, Parker and Ginobili will surely be resting (we wouldn't want this or this to happen, right?), so we can focus on the rotation players and recent additions as they get ready for the post-season. The Suns shoot an excellent percentage and struggle to defend the pick and roll, characteristics a lot of Western Conference teams share. They're a decent proxy for the teams we'll be facing in rounds one and two and we'll need to move the ball sharply to keep shooters like Danny Green and Gary Neal in a good rhythm. 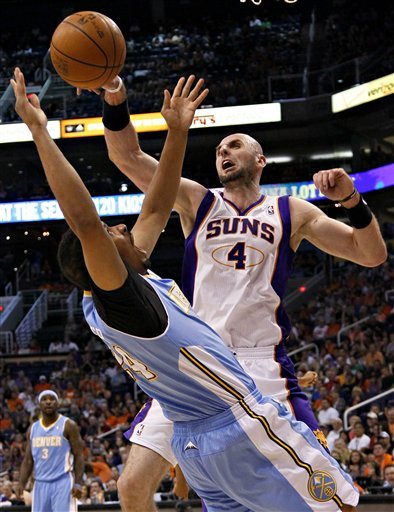 Marcin Gortat is not as scary as Andrew Bynum, but he can hit you for twenty points and five offensive rebounds just the same and is a dependable presence on both sides for the Suns. Dudley and Frye are the streak three-point shooters that heated up and melted the Spurs in 2010, and you can add Micheal Redd and Shannon Brown to that group. Grant Hill was a rock for them all season before a knee injury took him out. The Suns had plenty of opportunities to give up and tank but they kept going until Channing Frye's shoulder injury left the forward rotation in shambles and the Jazz stabilized after a 3-6 stretch.

Steve Nash is the man who makes it all work, and I kept coming back to Nash when considering whether Phoenix might be the easier playoff opponent. It's all moot now, but the Jazz don't have anybody like Nash who can bring out the best in teammates who would be out-matched without his influence. Utah has size but are just as vulnerable on the PnR as the Suns are. Harrington and Millsap pose a different and less familiar kind of challenge than the Suns, who might be closing the door on the Steve Nash era this off-season. It'll be weird to see what kind of team they become if he decides to join a more competitive team for his last few years.

There is a chance this game could become relevant in a different way if the Spurs and Bulls both advance to the Finals, which is a consideration I could see the coaching staff contemplate quietly or ignore entirely. SA and Chicago are at 16 losses apiece. The Spurs don't have the tie-breaker, so a win tonight secures hypothetical home-court and gives us a chance to capitalize if Chicago loses in Indiana. There are still three rounds of playoffs against the size, talent and athleticism of the Western Conference before any of this matters, so I hope the players and coaches aren't spending as much time on this as I am.

Game Prediction: I'm not going to try and predict what Gregg Popovich is going to do with this game beyond resting the veterans, but if the Spurs make it a priority we can squeak out a win in Phoenix and deny the Suns a playoff berth. It's not as simple as picking our opponent, but i still think the smart move is to make a game of it and try and force the Jazz into the first round.