What will Pop do with playoff minutes...What will he do? What a luxury.

Share All sharing options for: What will Pop do with playoff minutes...What will he do? What a luxury. 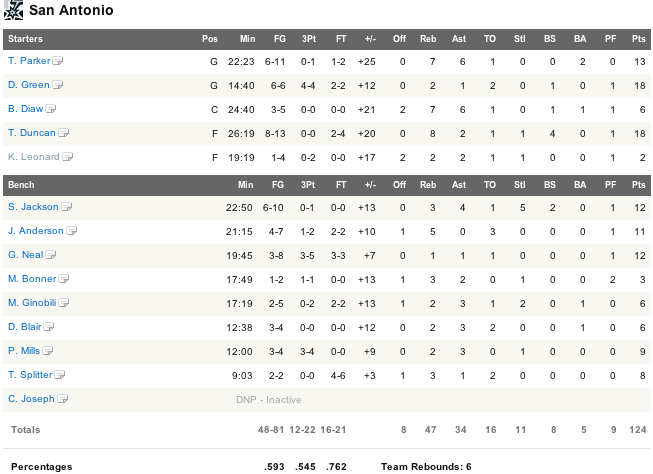 That's the box score from the game on April 24th against the Portland Trail Blazers. Every single Spur had court time, and all of them contributed positively. Cory Joseph (listed as DNP - Inactive) is with the Austin Toros.

Going into the playoffs, what exactly does Coach Pop do? Teams don't usually play more than 6 or 7 players maximum in the playoffs, because your starters are what are most important

I posed this question of what exactly Pop will do on Twitter and got various responses:

@poundingtherock Hard to judge 2012 Pop by past playoffs. He knows he can't just depend on Big-3.

@poundingtherock just see who's on fire and stick up with it maybe? Re: spurs playoff rotation

So here's what I discovered. In the 2007 playoffs, specifically the Finals series, Pop usually played 11 players. 3 of those players usually played less than 10 minutes, and 5 of those 11 players usually played less than 20 minutes. That's a lot of words, so let me explain a little better. Even though Pop played 11 players, 5 of them played significant minutes. What does that tell us? Well, it tells us that we can expect Pop to play his starting 5 close to 40 minutes a game, with each of his starters getting a 5-10 game minute break. Regarding when each bench player comes in to spell a starter for a little bit.

What's that mean to this year's squad? Expect the starting lineup of Tony Parker / Danny Green / Kawhi Leonard / Tim Duncan / and Boris Diaw or Tiago Splitter or DeJuan Blair (not sure which of these yet, but we will find out) to play upwards of 35 minutes a game. You can then expect Gary Neal, Manu Ginobili, Stephen Jackson, Matt Bonner, and another big man to spell the starters for 10 to 20 game minutes total.

Or, you know, Pop could throw us all through a loop and play the same minutes as he has been all season. Can't say I believe he'd do this, but it would make sense and wouldn't surprise me if he did.