Spurs explode in second half of Kobe's return

Share All sharing options for: Spurs explode in second half of Kobe's return

Coming into tonight, I wondered which game was the aberration. Was the dominance of the Lakers in the first meeting the real sustainable style of play in this matchup, or was the flowing, deep attack of the Spurs the true factor in which team was better? Really, both games seemed like an aberration to me. We may never see the Spurs get outrebounded like they did a little more than a week ago, and in all likelihood we probably won't see a Los Angeles team commit as many turnovers and get run out of its own gym as it did a few nights ago. But tonight didn't seem like anything out of the norm. The Lakers didn't turn the ball over like crazy (just 12) and they hit nearly 43 percent of their 3-point attempts. Kobe Bryant was 7-for-12 from the field and never went into ball-hog mode in his return from a seven-game absence. No, it wasn't some stinker by L.A., the Spurs simply outplayed them in nearly every aspect of the game in their 121-97 win at the AT&T Center.

San Antonio shot 61 percent from the field, including 66.7 percent from the arc, and outrebounded the Lakers 42-29 in a drastic turn of events from a little more than a week ago. And in what could be the most telling stat of all, given the two teams' respective makeups, the Spurs outscored Los Angeles 22-4 in fast-break points as they once again exposed the Lakers' lack of depth, youth and athleticism. But, in the return of Kobe Bryant - who clearly was not 100 percent - you could argue the most telling stat of the night was actually the 54-30 edge in points in the paint for San Antonio. Los Angeles did a much better job early in this one than they did on Tuesday at keeping Tony Parker out of the paint. But it didn't last long.

Parker finished with 20 points and 10 assists, Tim Duncan had 21 and eight rebounds and Manu Ginobili filled the box score with 20 points, seven assists and six boards as the Spurs outscored the Lakers 65-45 in the second half. It marked the first time since April 1 of last year that each member of the Big 3 dropped at least 20 points in the same game, perhaps a sign of where this team is as the playoffs approach. As great as San Antonio's depth has been, and as many luxuries as it has afforded, the Spurs win only if the Big 3 turn back the clock come postseason play. And with health being so important, neither Duncan, Parker or Ginobili played more than Tony's 27 minutes tonight.

With the playoffs closing in so quickly, I was curious to see the way young players responded in high-pressure situations. Look, it's not the postseason yet, but tonight's game had a different level of intensity. It was one of those let's-see-what-we've-got games. And in his first matchup with Kobe Bryant and the No. 1 seed hanging in the balance, Kawhi Leonard was awesome. Not only was his defense on Kobe pretty solid for a 20-year old guarding one of the NBA's all-time greats, but that corner 3-pointer is really falling with regularity. At the beginning of the year his critics talked of his inability to shoot the ball. It was something that would potentially keep him out of the rotation at times given the Spurs' spread-and-shoot style, even if his defense was great. Remember, Bowen wasn't an offensive-minded player, but his knowledge of the system and knack for hitting huge corner threes kept him playing big minutes for Gregg Popovich. Leonard is proving he can fall right into place. 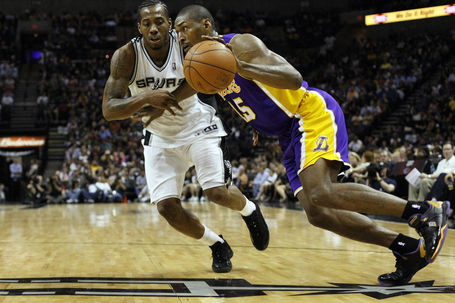 Soobum Im-US PRESSWIRE - Presswire
Leonard has been a willing contributor in every aspect of the game.
Prior to tip, Popovich said he didn't think Kawhi would be as good offensively as he already is.

Over the last nine days we've seen polarizing results in terms of the style in which these games were played. The Lakers won a halfcourt, grind-it-out type of game on April 11, one in which Los Angeles slowed the pace and absolutely dominated the glass. You know, the game where Andrew Bynum had 30 rebounds? Well, he had two tonight. TWO! What a difference nearly a week and a half makes. A few days ago at Staples Center, the script was flipped. The Spurs ignited a torrid attack of transition brilliance as the slower Lakers had no chance of keeping up once the ball started rolling downhill.

The Lakers made a concerted effort to slow the poison which killed them a couple of days ago, but Tony Parker found other ways to torch the defense. Off every screen, every drive to the basket, Parker was swarmed by a Los Angeles team hell-bent on keeping the Spurs' point guard out of the paint. But, as Parker has done all season, the team's lone All-Star found other ways to affect the game with his passing. It has been by far his best season in San Antonio, and his ability to break down the defense without using his shot has been beautiful to watch. With Tiago in the starting lineup, Parker and Splitter used the pick and roll, not necessarily to set up the roll man but to hit Duncan for the 18-foot jumper. And once the defense began to respect Duncan's shooting ability and rotate a man over to help, it just opens up the corner 3-pointer, one of the staples of the Spurs' offense. When this offense is flowing the way it currently is, it's hard to imagine a defensive strategy that can stop it.

The Tim Duncan, Tiago Splitter dynamic is an interesting one. It's a lineup many fans have been calling for, especially after the pounding at the hands of the Lakers during their last trip to San Antonio. But with the decided size advantage Los Angeles possesses and the general ineffectiveness of DeJuan Blair against that front line, Popovich decided to go with the longest frontcourt he could throw out there. And to an extent, it worked. But it's been an interesting exercise. For the second straight game against the Lakers, the two started the game together only to have Boris Diaw stand in alongside Duncan to begin the second half. Whatever Pop's strategy might be from game to game, this roster has proven its ability to adapt to nearly every situation.

This was an important win for the silver and black. Not only does it eliminate the most difficult opponent remaining on the regular season schedule, but it allows the Spurs to maintain that game in hand over the Thunder. Somewhere shortly down the line we'll almost assuredly see Pop sit the Big 3 to prepare for the playoffs. And given the fact they can go 3-1 down the stretch and still clinch the No. 1 seed in the West, it really makes the possibility of home-court advantage, at least up to the Finals, seem like more of a certainty.

It's funny the way things can change in a short period of time. Rarely is it a good thing to be beaten down as the Spurs were on April 11, when the Lakers embarrassed them in their own building. But it seems something positive came out of it. San Antonio was issued a wake-up call by the long arms of Bynum, and as of tonight it seems the Spurs are wide awake. 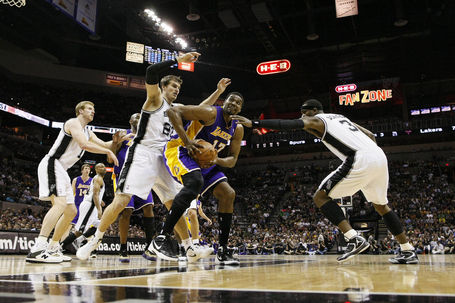