The game was tied last Tuesday night, 41-41 in the second quarter of the Spurs game in Los Angeles against the Lakers who had schooled San Antonio at home just 6 days before. But once Tim Duncan re-entered the game after his first breather, the Spurs went on a run the put the game out of reach. What the Spurs did on offense has been much discussed, but it's the job that the Spurs, but mostly Duncan, did that really caught my attention; enough that I had to sit down and catalog the carnage.

One more thing is necessary to completely set the scene. In the first quarter, Andrew Bynum sank six baskets on nine shots for 13 points. He was agressive, active and completely involved. He was getting to the rim for alley-oops, dropping in hook shots, dunks and short jumpers. He was the main reason the Lakers were in the game. He played the whole quarter and rested for almost the first 7 minutes of the 2nd. We pick up our story just before he reenters the game, with the score tied at 41.

Duncan does a great job before Pau Gasol gets the ball, to deny him the spot he wants, and when Ramon Sessions passes to Gasol, he's on the left block outside of the paint. Danny Green slips down to prevent a move to the center of the lane and Gasol passes back out to Sessions who's in position for a corner three. 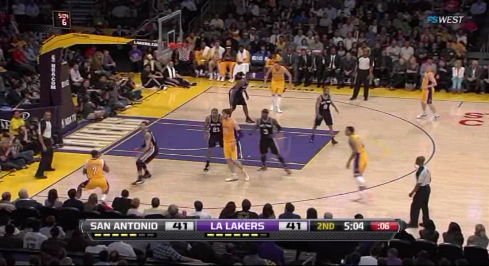 But Sessions he drives on Green, who's just made it to him by this time and was trying to deny a jumper, and misses at the rim. Duncan rebound. Quick outlet to Tony Parker, to Stephen Jackson, layup. Laker Timeout.

Bynum enters the game and Duncan guards him. Bynum works to the right block, but before he can get move to get into the lane, Sessions drives to that same spot and attempts a jump pass to Matt Barnes, who was moving instead of spotting up, and the ball goes out of bounds. Turnover #1. (Duncan didn't really have much to do with this one.) Danny Green makes a three on the other end. 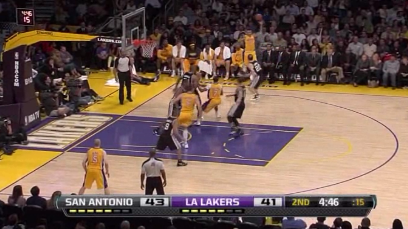 Duncan waits for Bynum just inside the free throw line, and Bynum comes jogging down the court and smashes into Duncan, but still ends up outside of the lane as he posts up and calls for the ball on the left block. Barnes passes to him, and as Bynum, waits for the ball to arrive, Duncan pulls one of my favorite tricks when guarding a big man. He times the pass perfectly and slides from his position behind Bynum to his side and slaps the pass away before Bynum can control it. 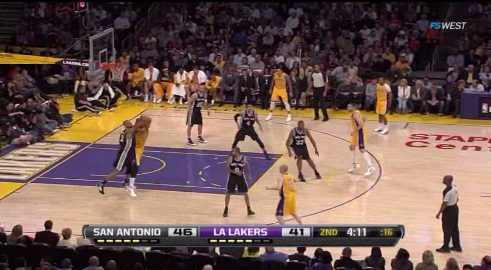 Duncan beats Barnes to the ball, tips it to Parker (Turnover #2) and Green nails a wide-open three.

Bynum wants to try the right block again, but Duncan is holding his ground, not allowing him into the paint. As the Laker guards swing the ball around the perimeter, Bynum moves through the lane to set up on the right block, but Duncan gets there first and fronts him.

When Bynum can't root Duncan out of his spot, he circles around him and by this time Sessions has received a pass in the corner with Green pressuring him. Instead of waiting for a pass, Bynum moves up to set a pick, which Green goes over. This would've left Sessions unguarded, but Manu had left Barnes and is there to cut off his drive into the paint. Sessions passes out to Barnes at the top of the three point line, and his jumper, which Manu is just quick enough to contest, is off. Parker cans a transition jumper on the other end.

After a foul is called on the Spurs, the Lakers in bounds and Bynum again has Duncan on him. For the third time, they try to play they've not yet been able to run correctly. Feeding Bynum on the left block so he can post up Duncan. Sessions waits for Barnes to clear, and then looks to pass to Bynum, but Duncan looks to have position to slip around him again to steal the ball, so Sessions passes to Barnes who moves to the right side as Bynum surrenders the right block, and goes through the lane to try the left side.

As Duncan make him work to get through the lane, Bynum spins and Barnes tries to lead him to the bucket for an alley-oop, but the timing is all off, Bynum doesn't get there in time, and the ball goes out of bounds. (Turnover #3) 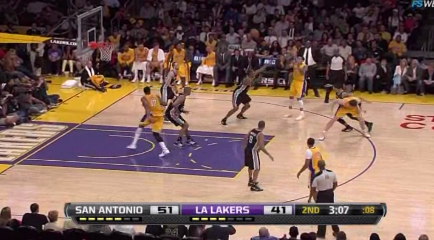 On the other end, the Spurs work a pick and roll and Manu gets a layup.

The Lakers finally go away from posting Bynum, and instead have him set a screen on Parker as Sessions quickly brings the ball up the court. Manu is forced to guard Gasol, who receives a pass on the left block as Manu tries to avoid the mismatch by going for a steal, but he's not fast enough. As Gasol faces up, Duncan is on Bynum to the right of the basket, but as Bynum moves through the lane to the left block, Duncan stays to offer Manu help. Gasol sees Bynum open, and tries to go baseline and pass, guarded by both Duncan and Manu. But Green had dipped into the lane to help and stole the pass (Turnover #4). 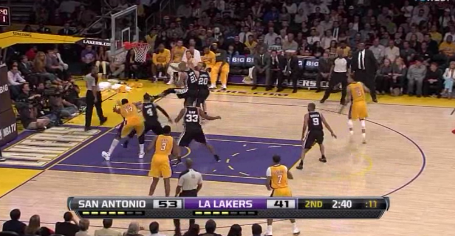 Outlet to Manu. Pass to a streaking Diaw who's ahead of his man, and receives the ball in the lane for a layup.

Bynum is again on the left block, and Duncan has contact with him, but Bynum's not really fighting to get position, and it's because Sessions and Gasol are working a quick pick and roll up top, which results in both Diaw and Parker on Sessions, who passes to an open Gasol at the top of the key as Diaw scrambles to get to him.

In the meanwhile, Duncan has been watching the pick and roll develop, and he's ready to leave Bynum, while still being conscious of where he is. Bynum takes advantage of Duncan's divided attention to sidestep Tim just as he was trying to body Bynum while keeping an eye on the Sessions/Gasol pick and roll. This sidestep means Duncan's moving backwards and towards the rim, just as Bynum circles around Duncan and flashes into the lane and calls forthe ball. This is the best chance he's had in the entire second quarter. 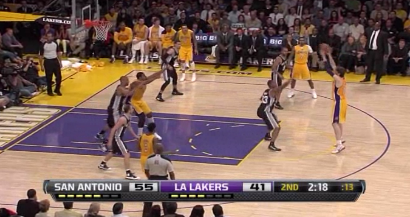 Gasol sees Bynum's and his prime position, and passes to him as soon as he receives the pass from Sessions. But the pass never gets there because as soon as Bynum moved around Duncan, Tim executed a similar semi-circle, and once again slid around Bynum in perfect time to slap down the pass (just like before) which is recovered by Green. (Turnover #5)

Tony and Duncan work a pick and pop on the other end and there's your 16-0 run for San Antonio.

The run was ended by a Devin Ebanks jumper that made it 57-43 with 1:32 left in the second quarter. But what's interesting about the possession is how little Bynum moves. Through the entire play, which began on an inbounds pass after a Spurs foul, Bynum stands on the extreme low right block, doing essentially nothing while Gasol runs the play that L.A. has been trying to run for Bynum for the last four minutes: a post up on the left block.

As Gasol works on Diaw, Parker darts toward him and tries for a steal, but Gasol passes to Blake, who passes to Ebanks who fakes a drive on Manu before rising up for his shot. And for this entire sequence Bynum stands on the baseline, Duncan defending, and waits for the play to develop. He makes no move for the basket and only contests Duncan when the shot is about to go up as he preps for rebounding position.

In just over 4 minutes, Duncan and the Spur defense took him from being the key of LA's attack, to a stock-still bystander; and the rest of the game was an afterthought.