Share All sharing options for: Analyzing the Spurs Pick And Roll Attack: Part 2

In the first post of the series, we looked at some plays that worked and some that didn't. In this post I'll analyze three more instances and show how a play that didn't work could have with just a small variation in the screen, detail the versatility of the Duncan-Parker P&R attack, and see why Tony taking so many mid-range jumpers against the Lakers on Tuesday night was far from an accident.

In the first post I explained that by slipping the screen Blair made it easier for the Laker defense to recover. Let's see how it goes with Splitter setting the pick. 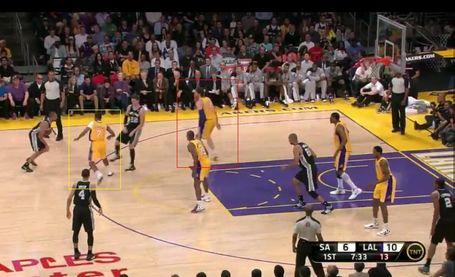 When a good P&R defender is on a guy like Tiago, who has no range, it usually limits the ball handler's options when the roller slips the screen. When the screen is solid (as it is here), the ball handler has the upper hand on the defense. Here, Sessions is guarding the ball handler and Gasol is the secondary defender. 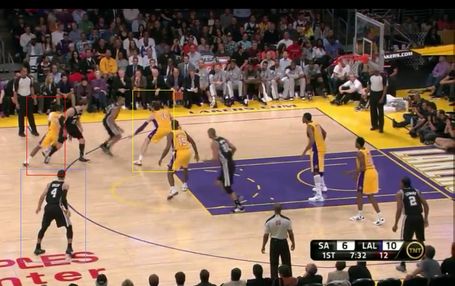 Since the screen is very good, Sessions gets caught in it. Tony is now facing a back-pedaling Gasol one-on-one. From there, Tony has three options. He can wait for Tiago to roll (which in this case wouldn't be wise since World Peace is ready to help) punish Metta for cheating off Green by swinging the ball to Danny Green, or take the mid-range jumper. 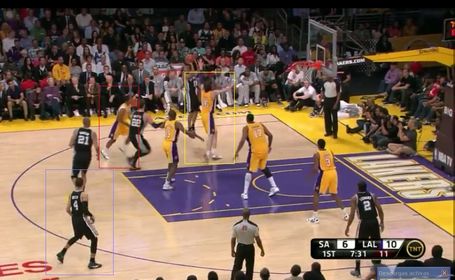 He goes for the jumper. This early in the game that's the right choice. If the defense has to respect Parker's mid-range game, a lot more space is going to be open later on. He also could have given the ball to Green, who is completely alone since World Peace had to help on Tiago's usually devastating rolling attack.

In the first post I mentioned that Timmy's range adds a different wrinkle to the Spurs P&R attack. Here's a variation of the second play from the previous post. Instead of passing to an open Duncan, Parker is the one who takes the shot here. 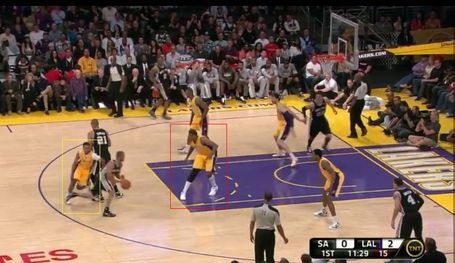 The play starts like the one from the previous post except Sessions is the one guarding Parker. Duncan sets a great screen for Parker to go to his strong hand and Sessions goes over it, which leaves him trailing Tony. 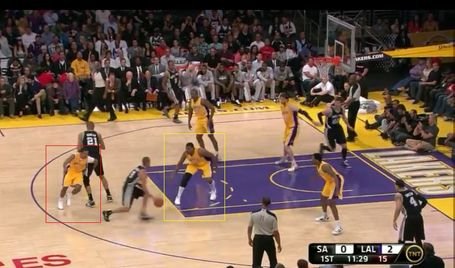 With Sessions caught on the screen, Parker has Bynum guarding him, but as we know, Bynum stays in the paint when defending the pick and roll. Green and Leonard are spacing the floor in the corners, so the Lakers can't afford to send a third defender to Tony. 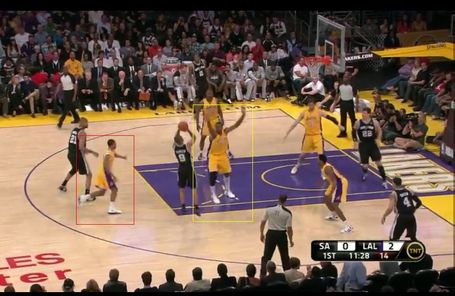 Parker pulls up before Sessions recovers with Bynum closing out late. The Spurs get an open jumper out of a simple P&R play by recognizing that Bynum can’t help in the perimeter. Had Sessions gone under the screen, Duncan would have been open like he was in the play I looked at in yesterday's post.

Tony taking that many mid-range jumpers seemed odd, but after looking how he manages to get open by running basic P&R sets, it makes a lot more sense. If Tony can keep making those Js, the Lakers will eventually adjust but the Spurs have enough weapons to counter. Building an attack on the mid-range game is dangerous but when you can consistently get open looks for one of your best players by simply attacking off the P&R you have to go for it. Without dangerous 3-point shooters spacing the floor, the Lakers would simply pack the paint, neutralizing the P&R.

Bonus round: Manu and Bonner force the switch

I included one of my favorites plays featuring Bonner in the last post so I'll include one that helps illustrate why Matt helps the team so much on offense even when he's not shooting. 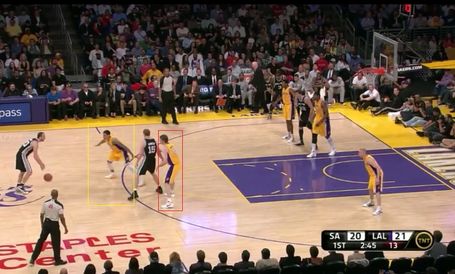 As anyone who has ever seen a Spurs game knows, Matt Bonner is not a threat rolling to the basket. That being said, his 3-point shooting makes him a great pick and pop player. So good in fact, that just his presence on the court helps create mismatches. Here, Bonner sets a high pick for Manu at the top of the arc as Barnes and Murphy defend. 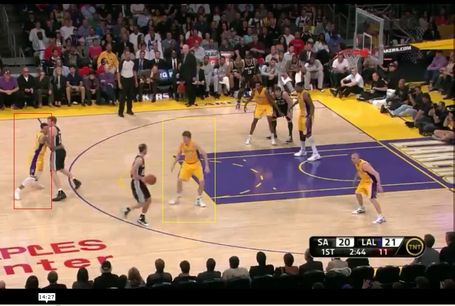 Bonner's pick is good enough that Barnes gets caught in it. Murphy has to show hard on that high screen since Manu, unlike Tony, can pull up for a 3 off the dribble. With any other Spur setting the pick, Barnes would rush back to Manu to prevent the mismatch. 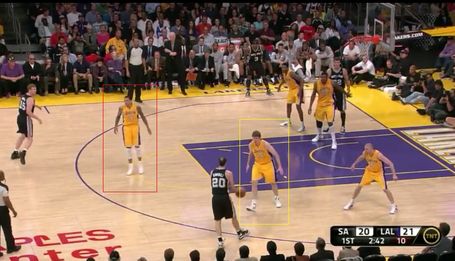 Since Barnes has to respect Bonner's range, he instead stays with Matt, leaving Murphy one-on-one with Manu. In this particular play, Manu tried to make Murphy pay for sagging off by launching a 3 (that missed), but he could have taken Murphy off the dribble. If Manu had hit the 3, Bonner would have gotten a +3 without doing anything other than setting a screen. Will Bonner be as valuable in the playoffs? Who knows. But it's pretty evident what he contributes to the offense on a nightly basis during the regular season.