So stop me if you've read this one before, will you? I'm not sure what else there is to say about Spurs versus Lakers, except that it's happened an awful lot lately. I know they say familiarity breeds contempt, but we pretty much already have contempt for the Lakers, so this scheduling is rather over doing it, if you ask me.

What pearls of wisdom could I possibly add to this epic discussion? Well, here are some obvious and hopefully some not-so-obvious points to keep in mind for tonight's game:

1. When has Kobe Bryant ever missed games due to injury? This is just plain weird, and I don't know what to make of it. I assume he will play tonight, rather than sit in a very tall chair on the sideline in a slick suit. I have read stuff saying that if this were the playoffs, he would have been playing, that this is basically a coaching decision. Maybe this is the case, although it doesn't sound like the Kobe Bryant we have grown to know and adore all these many years. Maybe age is catching up with him, maybe his new coach is more cautious, maybe he is injured worse than they are letting on, maybe, maybe, maybe. I don't know. It's a lot like the kind of speculating folks do regarding Manu, or Tim. Kobe isn't young anymore, he is very human. All I can say is, anybody who thinks the Lakers are somehow better without him is not being realistic, in my humble opinion. Is Kobe a ball hog? Yes. But the Lakers are much more dangerous with him on the floor, end of story. 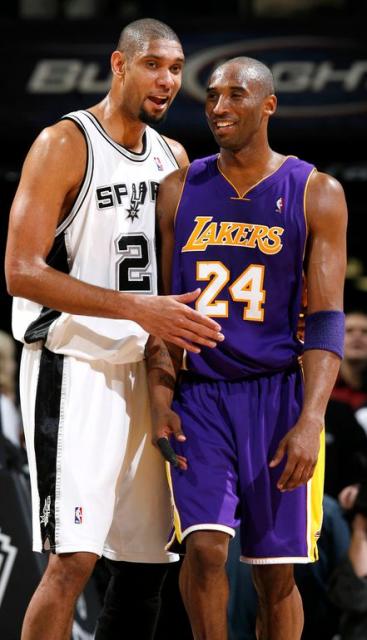 2. Andrew Bynum is pretty good. All of us would agree with that. Some of us even think he is or soon will be the best big man in the game. I won't argue that point. You know what Andrew Bynum is not? He is not Wilt Chamberlain. Last week in San Antonio the Spurs made him look like Wilt Chamberlain, and that simply cannot be allowed to happen. Thirty rebounds was humiliating, and if Bynum is allowed to ride roughshod like that, and more generally if the Spurs get heavily out-rebounded, the Lakers win this game. San Antonio did a much better job evening up the rebound battle in Los Angeles Tuesday night, and they need a similar effort tonight.

3. Laker fans are so hard to love. I would like to see a lot of them in Kobe jerseys tonight sitting in the most expensive seats that can be found in the AT&T Center and crying pitiably into their Whataburger cups as their boys get smacked around for a second consecutive game. I want to see a nine minute YouTube clip of nothing but wall to wall weeping Lakers fans, set to really sad music. I want this. Is that so wrong?

4. If the Spurs depth matters, it had better matter against a team like the Lakers. The Lakers, with or without Bryant, having lost Odom, having replaced Jackson, having jettisoned Fisher, are still a damn fine team. That first five is as tough as there is, especially if they can dictate a slower pace and feed their big men, who are both awesome, and most especially if they have a healthy Kobe Bryant. The verdict is out on whether Ramon Sessions improves them, as their defense seems to have slipped a bit since the trade deadline, but logic would lead us to say that that trade made them younger and more offensively potent. Now, when you get to the Lakers bench, it's a different story. If the Spurs reserves are the class of the league, and I believe they are, they must expose the Lakers' depth issues. The Spurs' role players stepped up and performed on Tuesday night in LA, and will need to outplay guys like Steve Blake and Matt Barnes again tonight. Ole.

5. No pyrrhic victories. As the season winds down towards the playoffs, things are always weird. How much effort should be put into winning this game? How does the team stay sharp, without wearing itself out? How should minutes be divvied up? Add to this tricky juggling act that these teams may meet again in just a couple weeks for a series, and that these teams have a decade long history, and, to top it off, each team just got finished spanking the daylights out of the other. All of this makes for a strange brew, indeed, and I do not envy Popovich having to try for that perfect balance. But, I know he and his staff will definitely be prioritizing, with the image of Manu Ginobili writhing in pain after getting his arm caught in a pick during a somewhat meaningless end-of-season affair planted firmly in the forefront of everyone's mind. So, in short, this game may mean a lot to us fans, but winning is not the biggest priority for the staff or players. This game is a good way for the Spurs team to test itself against a playoff worthy opponent; it's an opportunity to again demonstrate that they have the size to compete with the Lakers; it may be meaningful for the purposes of staying sharp; and it may be useful if Kobe plays for the purpose of both teams sizing each other up for any future encounters. But once those things have all been taken care of, I do not expect either team to be giving their aging cores heavy minutes or fighting and clawing for a win. Take care of the important stuff, and live to fight healthy on another, bigger day. 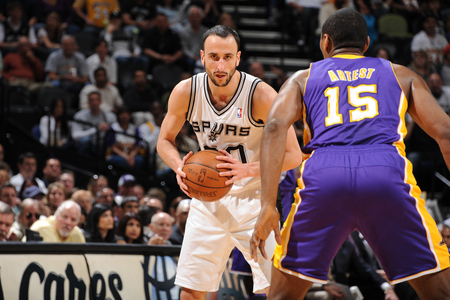 NBA Stats Cube Lineup Comparison here. Lakers perspective can be found at Silver Screen and Roll. Those guys have silver in their name.

Game Prediction: I bet this won't be a blowout. In the fourth quarter, it may be bench versus bench. But the Spurs are rolling and want to avenge their worst home performance of the season. They will do so.

As always Tony must dominate Fisher (sigh), and NBA league pass is recommended for those who are willing to pony up the cash. Almost every Spurs game will be broadcast there, which is especially helpful for those of us who aren't in the San Antonio area. Please don't post links to illegal game feeds in the game thread. Links to illegal feeds are not permitted on SBNation, but you can probably find them out there on the internets if you're resourceful and desperate.