Share All sharing options for: No Duncan, no problem: San Antonio Spurs roll to fifth straight win over Sacramento Kings 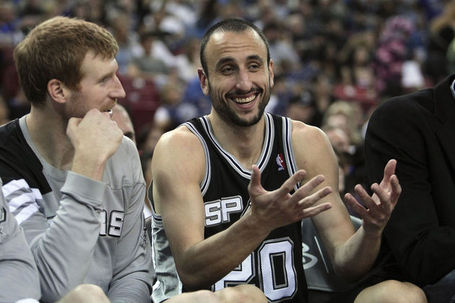 Matt: "Manu, tell me a sandwich story of yours. You look like a salami with no mayo person."
Manu: "Glad you asked, Matt. I'm actually pretty scientific with my sandwiches. I like wheat bread about 3.56 cm thick, I want the whole thing about 3 feet in length, half an inch in height..."

On a busy NBA schedule with 28 of the 30 teams playing on the same night, the story of a game between the San Antonio Spurs and Sacramento Kings will most likely be relegated to a footnote, and rightfully so. Even with their best big man taking the night off (no DNP-OLDs this time around), the rest of the Western Conference-leading Spurs handily defeated the listless Kings, owner of the second-worst record in the same conference. Sacramento kept the game close in the first half, until San Antonio put on a clinical offensive display in the third and fourth quarters, and locking down defensively in the final period by holding the Kings to only 16 points.

With the latest win, San Antonio became the first (and quite possibly, only) team this season to have won all its back-to-back-to-back sets. It was also San Antonio's fifth straight after its embarrassing defeat to the Lakers in San Antonio a week ago, and 15th win in the last 18 road games after starting the season with 5 straight road defeats. The Spurs have also won a staggering 18 of its last 21 games, and has been 21-6 since the All-Star break. Indeed, these are gaudy numbers that are fun to rattle off, but will only become truly meaningful if they translate into playoff success.

I think we're at that point in the season where games fall somewhere between "dreadful" (for teams in full tanking mode) and "frantic" (for teams in the playoff hunt, fighting for the rights to get beaten black-and-blue by the top seeds). Along the way, you have teams jockeying for optimal playoff position (hello, 2011 Memphis Grizzlies), but more or less, we know who or what our team is, and improvements are, at best, marginal.

I'm not sure if you can take away anything from this game, maybe further validation that our roster is deep? The Kings almost paraded a full lineup (John Salmons was inactive, but he hasn't exactly been game-changing for their season), and yet proceeded to get dominated by a team supposedly ripe for a letdown after a superb revenge game in LA AND playing in its third game in the same number of nights. Gary Neal's 8-for-9 shooting -- zero attempts from three! -- did not reflect at all any tired legs (he did tweet "tired.com", which he's done before during packed schedules). Kawhi Leonard, meanwhile, bounced back with another stat-sheet stuffer of a night, leading a second half surge that enabled more rest for Parker and Ginobili. 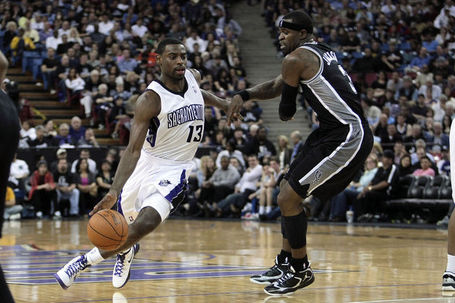 Tyreke: "Body contortion, Captain. Only for ages below 30."

As for Sacramento, the lack of size and defensive prowess of their backcourt -- they start once-upon-a-point guard Tyreke Evans at small forward these days, for chrissake -- require their big men to work extra hard trying to erase mistakes, which is a daunting task even for a front court as talented but inexperienced as DeMarcus Cousins and Jason Thompson are. Noted Spur-killer Marcus Thornton initially scared the Spurs by going 6-for-7 for 14 points in the first quarter, but then crashing back down to earth by going 3-for-9 the rest of the way. He did sum up the Spurs' play the last couple of months with this description: "'They are a tough team to play; they have (good) players at every position that can go in and be productive. And it's not just on offense, it's at the defensive end, too. That's the mark of a great team." Why, thank you, Marcus.

Cousins also had a tamer praise for this Spurs team. I enjoyed reading about and telling a friend of Cousins' remark to Tim Duncan of "F*ck, you're good" the last time Timmay put up a superb effort in the team's last visit to Power Balance Pavilion, saying this time "They executed better than us in the third quarter, that's what happened. They ran their stuff to perfection and took us out of our game.'' Thanks, Boogie, we'll take it. And not to go all Duncan-to-Lebron after the 2007 sweep on you, but you'll own this league very soon, assuming you get your head screwed on straight.

So one of the questions that remain to be pondered on, with only the Lakers game left that carries some weight among the five remaining games... is it bubble wrap time to avoid injuries, or let's continue riding the momentum up until to where it takes us? CIA Popovich can very well be highly trained to combat brain-picking or mind-reading, but once in awhile, he throws a bone for us to decipher if any of his words are the least bit genuine or a wily attempt at total misdirection. Taking Pop's post-game words:

''Everyone wants to be in a rhythm now. It's too late in the season to lose a bunch of games when they really count at this point in the season. Being able to win down the stretch of the season, nobody would trade that.''

The balancing game in front of the Spurs seems to shift now to getting enough rest versus maintaining rhythm. Perhaps the top seed and homecourt advantage would just be a by-product or a consolation prize to the confidence that winning down the stretch will instill. On the other end, limiting the odds of an injury occurring by sitting star players for full games goes up, and becomes more enticing if you think back to what happened to Manu Ginobili last season. Both approaches are not perfect, but it should be interesting to see how Pop will balance the scales.

Honorable: Tony and Manu -- I think we wouldn't be able to beat the Kings without them. Other than that, I feel like paying tribute to our bench.

3 -- Tiago Splitter. I had this thought that Splitter seems to always play his best games against the Kings, so I tried looking for his split (pun maybe intended) stats. His 11.3 ppg and 6.7 rpg averages vs Sacramento is his highest when compared to other teams that he's played 3 times, so I guess it's safe to say he's our Random Scrub Who Kills the Kings

2 -- Gary Neal. Showed the league tonight that he's not just a three-point shooter. His in-between game is great to watch when he's hitting jumpers and floaters.

1-- Kawhi Leonard. His game-high plus-20 in the plus-minus column reflects his awesome impact in this game.

Up next: Our sorta best-of-three series in 10 days with the Los Angeles Lakers conclude Friday night in San Antonio. It'd be a nice psychological boost if we can win the season series. 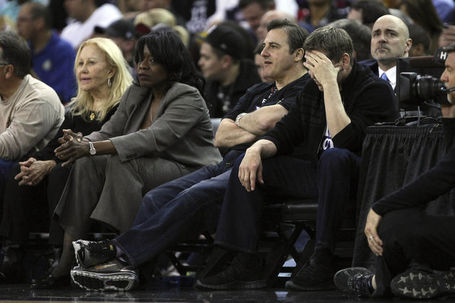 You deserve to watch this beating, and you deserve that face-palm, evil Maloof brothers.