Not All Basketball Games Are Worth Winning

Share All sharing options for: Not All Basketball Games Are Worth Winning

It is once again that time of year when Popovich will choose to play the Did Not Dress card as often as possible. In previous seasons, this annoyed me to no end. I felt as if the Spurs needed 20 things to go their way in order to have a chance at winning it all and the games that he seemingly threw away served to start us off 0 for 5. This year, however, my mindset has shifted. In my opinion, we are now the team to beat in the West. If you are with me so far, then logically, our seeding is insignificant as are our opponents. Rest and health are paramount to our future success. So I agree with Coach Pop for the first time when it comes to his fondness of sitting our Big Three. Let them rest up and simply be in position to pounce when the playoffs arrive.

My attitude has as much to do with the Spurs as it has to do with our Western Conference competition. No one out there scares me. For the first time since 2005, I think San Antonio is the best team out West. It's a great, calming feeling to have. Now, let me do my best to take you to where I have arrived.

In my mind, there are four teams that are decent in the West and the rest are simply mediocre, relative to the Spurs strengths and weaknesses, that is. Let's begin with five teams that I would gladly play. Some will require a longer explanation than others. I'm going to use the top nine teams in the West since the seventh and eighth seeds are still up for grabs. 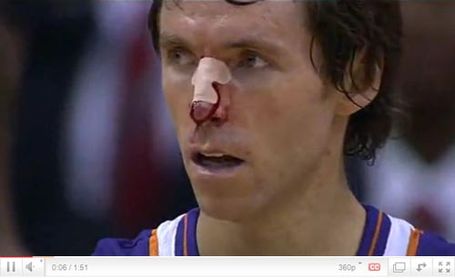 Steve Nash knows how this story ends.
via 1.bp.blogspot.com

Nothing about this team scares me. They are small and greatly unimpressive. While Steve Nash is always a tough guard, his body has been showing signs of mileage. Shannon Brown reminds me of Stephen Jackson circa 2003. A raw, dangerous player but one that should be the fifth fiddle, not arguably the first. This is either a sweep or Spurs in 5. 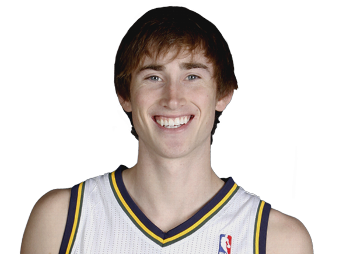 Their bigs are good, but still leave something to be desired. The Milsap / Jefferson combination has always been a perplexing one to me. They're the same player, right? What Al Jefferson lacks in athleticism Milsap lacks in size. We should trade them DeJuan Blair so that they could really run the same dude out there for 48 minutes. Their obvious weakness is in the backcourt. Devin Harris and Josh Howard fell off a cliff when they left Dallas and Gordon Hayward is a dude that just begs for a wet willy. Spurs in 5. 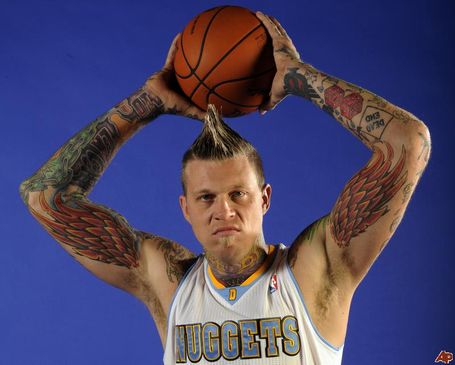 I've never been a fan of George Karl. He always seems way too content to make the playoffs for my liking. But the reason that this team is not scary is due to their personnel. If we played them, we'd have arguably the best six players at our disposal. Tony, Manu, and Tim are the obvious three, but keep going. If this were a pickup game and you were a captain, would you take Lawson, Afflalo, Gallinari or Harrington over Kawhi, Green, Jackson or Tiago? At the least, one could make the case that you wouldn't, right? If the Nuggets make the playoffs it will be due to the fact that they play good team basketball, and that's their problem against the Spurs. They will not out-team us. So what's left? Spurs in a sweep or in 5. 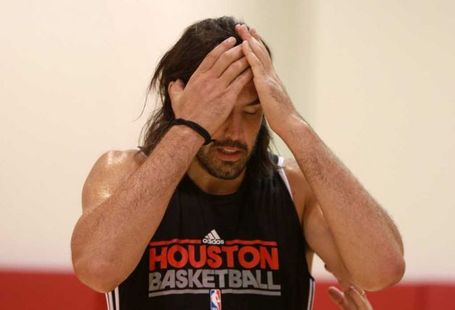 Taken moments after he found out that Blair is no longer his defender.

I know, they play us well, but that was before our defensive upgrades. Boris Diaw will single-handedly make this a much easier series for the Silver and Black. He is the perfect guy to throw at Scola. We've been lacking a versatile four defender since Robert Horry got too old. Scola is the guy that always gave the Spurs fits, but this will not happen as long as we have Diaw on the roster. Obviously, if Popovich decides against all reason to defend him with Blair, this argument is moot, but let's count on Pop coming through for us. We split the season series with them, but all these games took place before the Spurs were the Spurs, (by this I mean without Manu and the three newcomers.) This Spurs team will beat the Rockets in 5. 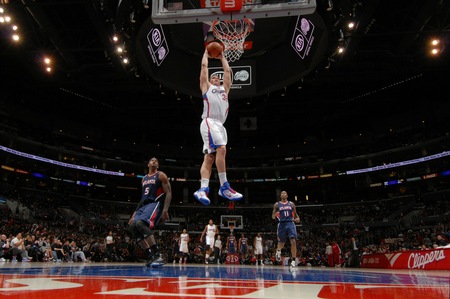 The extent of Vinny's playbook.

Tell your eyebrow to give it a rest. I stand by having them outside my elite tier. This is a Vinny Del Negro coached team, meaning they have to play a pickup game in order to win. This team thrives off of turnovers, fast breaks, and one on one basketball; i.e., things that do not happen against the Spurs in the playoffs. They do not pose problems against well-disciplined teams. We played them three times this year; we beat them by 25, lost to them in overtime, and then beat them by 12. In the loss the Clips scored 13 points on the run and 17 off turnovers. In addition, we had this tiny-eared fellow throw up his usual 2 for 6, 2 rebound, 1 assist, plus/minus -4 performance in 25 minutes. I promise, the Spurs will beat this team easily in 5, (6 if the Crawfords get involved.)

And now, the best of the West that will not get past the Spurs, (again, this is relative to our team. For example, others may have a much more difficult time beating the Clippers while Dallas may not pose a threat. But for us, Dallas will give us a series whereas the Clips will be a massacre. 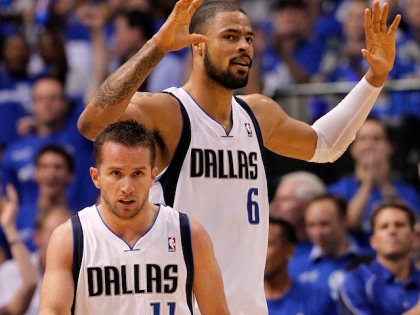 The offensive and defensive punch are no longer playing for the ponies.

Remember when Shawn Marion was complaining that the Mavericks weren't getting the respect that defending champions deserve? Well, that's because your team was gutted, Shawn, and it's now fighting for a playoff berth. I only put the Mavericks in this tier because we all know that the rivalry will dictate that this series has to be closer than it should be. That being said, we are much, much better than the Mavericks. Shawn Marion, Vince Carter, Delonte West, Jason Kidd; players that peaked before 2006. C'Mon, man! What is that? It's amazing that they've managed to keep their sinking ship afloat for this long. Dirk is a tough out, but the Mavericks, as a whole, are not. Spurs in 6, (just because you can count on something fluky happening.) 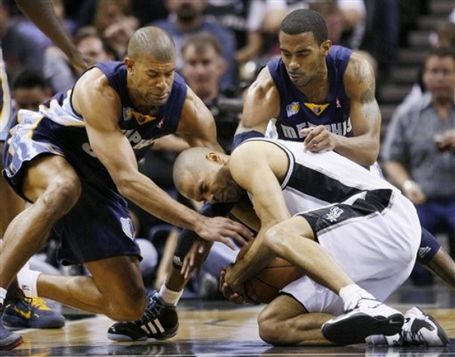 I'm not going to miss Shane in a Memphis jersey.

I am convinced that we will destroy them. For one, we have a healthy Manu who is just starting to regain his Manu-ness. Also, we have Tiago and Diaw to give us the size that we desperately needed last year. Kawhi, Green, and Jackson give us great wing help-defenders that have the ability to pester the Memphis big men and still recover to their man. This Spurs team is far superior to the one that lost to the Grizzles in last year's playoffs, but still has enough of the old regime to crave revenge. Personally, I hope we play the Grizzlies. Spurs in 6. 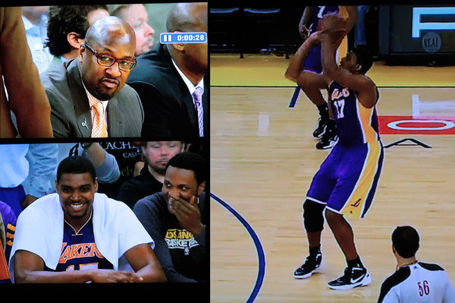 Their bigs clearly pose problems for DeJuan Blair, but we do not know how they would fare against a healthy dose Diaw and Tiago. Unfortunately, we will probably not be able to realize this unless we meet them in the playoffs. The more I think about the seemingly illogical choice that Pop made to not change his game plan, the more logical it seems. The regular season is not the appropriate time to show your hand. You do not go all in pre-flop. You play the game exactly the way you've been playing it because now is not the time to give your opponent any information that is not already out there. Pop is waiting for the river. He is slow-playing his aces and will expose them when the time is right, which is not now nor the next game. When it matters, Pop will play our best lineups the entire game and then we will see just how much of a team this Lakers squad truly is. And if the regular season fireworks are any indication, they will fold. Spurs in 6.

I wrote the above paragraph before Tuesday's game.

Turns out that I was wrong. Pop played our best lineups and the result was as good as we could have hoped. Pop benched Blair and the Spurs played a great game. That was the first step, but the difference maker was that Pop put Tim on Bynum. Tim can handle Bynum and for some reason, our others can take care of Gasol. I think we found the recipe for success. 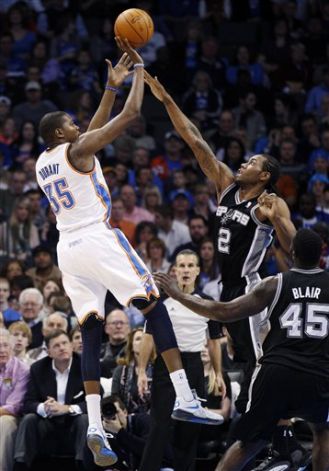 Kawhi is one of the few players in the league that can consistently contest Durant's shot.

I want to play this team more than any other. It's not time for the up and comers just yet. They need another playoff defeat and our Spurs are ripe to give it to them. We match up with the Thunder extremely well. The newcomers are the reason I feel so confident about this potential showdown. Danny Green and Kawhi Leonard were put on this Earth to give Russell Westbrook and Kevin Durant problems. If designing the perfect defender for Westbrook, you would want someone that anticipates, is long yet quick, and isn't afraid of scrapping. You would want someone that has a chip on their shoulder, maybe because they were cut from one of the worst teams in the league. You'd design Danny Green. For Durant, you want someone tall enough to bother his shot, yet low enough to take away his drive. This player has to be strong to deter post ups, and long enough to poke at the ball. Kawhi and Danny are the best tandem the NBA has to throw at OKC. Both are defensive oriented and are masters of the art of anticipation. Either can guard James Harden.

That;s it for the OKC offense, by the way. They have three offensive players and we have the athletes to defend all of them as well as is possible. Oh, and we have offensive gems like Tony, Manu, and Tim. And Stephen Jackson, Tiago, Bonner, Blair, and Mills. Any of these players are apt to score 20. The Thunder will get crushed by wave after wave of the Spurs' potential. This series will launch us into the finals with the confidence to take down whatever lowly team finds its way out of the Leastern Conference. The Spurs are going all the way this year; get ready for the ride of a lifetime.