Share All sharing options for: Analyzing the Spurs Pick And Roll Attack: Part 1

The Spurs dominated the Lakers last night after taking a beating the last go-around. The teams meet once more in the regular season (this Friday) and there is a chance they could also collide in the playoffs. With that in mind, I decided to take a look at how the Spurs use one of their most effective weapons, the pick and roll, against the Lakers and how the Lake Show defends it. This is pretty much applicable to any team that has one good P&R defensive big and one slow footed defender.The Lakers are just the perfect case study for it.

In DeJuan Blair and Tiago Splitter, the Spurs have a couple of guys that set screens and roll hard to the basket. Since both lack a jumper, you won't see them popping outside for a 16 footer. In those situations, if the roll man is guarded by a good P&R defender, he either needs to set a solid screen to free up the ball handler, or the guard need to look to pass as soon as the big slips the screen. The Blair-Parker pairing often struggles because DeJuan almost always slips the screen but TP seems to prefer a good pick that allows him to explore his scoring opportunities instead of immediately looking to pass as Manu often does. Here's an example (click on the image to make it bigger). 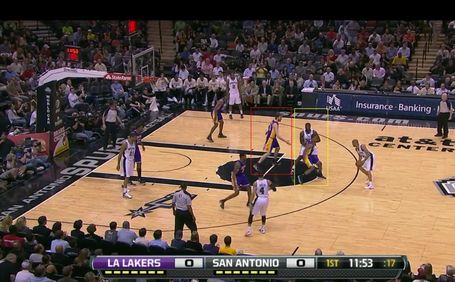 In this play, Parker gets the ball at the top of the 3-point line with Sessions defending him (yellow square). DeJuan sets a pick making Gasol the secondary defender on the play (red square). Gasol correctly shows, or jumps out in front of Parker, to prevent Tony from driving the lane. Sessions seems trapped by the screen. 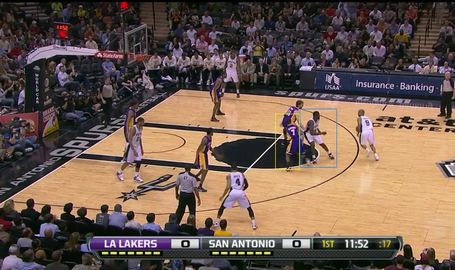 Sessions is now free because DeJuan Blair slipped the screen with the intention of rolling to the open space (see all that empty space in the lane) created by the threat of Leonard and Green behind the arc. Bynum is with Duncan but ready to help if Tony makes the pass. Gasol keeps showing to stop Parker while Sessions recovers. 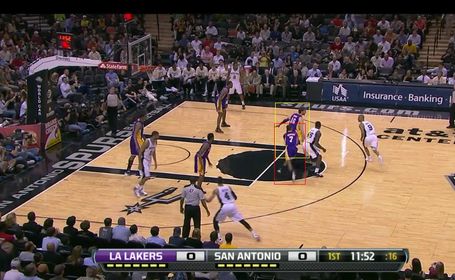 Sessions, who was the secondary defender when he was "caught" in the screen is now in position to recover and impede Parker's lane to the basket. By not having to account for a Blair jumper, the angle Sessions has to cover is smaller. DeJuan is turning to roll hard to the open space Bynum is patrolling. 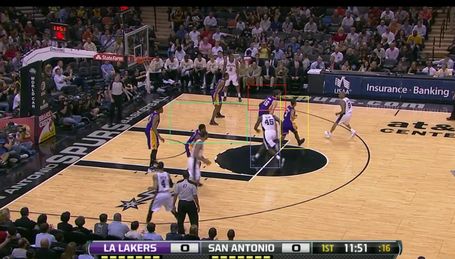 Sessions has recovered completely and is in place to stop Parker, while Gasol is still committed to defending either the penetration or the pass. Parker never had a enough space to launch a jumper. Bynum has moved to the painted area to close the open space, as Duncan had moved to the perimeter. Was a pass possible? Perhaps, but Sessions and Gasol did a good job of defending the angle. There is open space (green square) provided by the Spurs' spacing, but the pass would have been risky.

Parker doesn't have the 3-point range to punish Gasol for not showing aggressively. The fact that Gasol doesn't have to commit to Parker completely makes it harder for Tony to turn the corner on him and attack off the dribble before Sessions can recover. By slipping the screen as often has he does, DeJuan gets an easier roll to the basket but also frees up Sessions to help Gasol. With two defenders on him, Parker can't always find the angle to make a pass and has to reset the play. The fact that Blair was guarded by Gasol (an agile and long player; the perfect type to defend the P&R) neutralized the play.

If the screener has a reliable jump shot, then it opens up other options; like ...

The Parker-Duncan pick and roll gives the Spurs more options since Duncan has range on his jumper. The fact that Timmy is also usually defended by the other team's best post defender (usually a slow-footed big guy) also creates better opportunities for the offense. 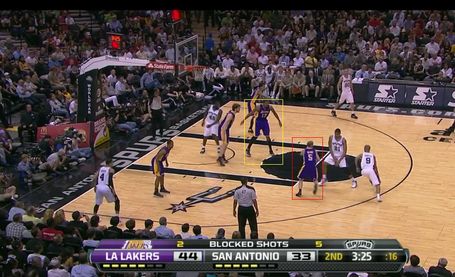 Parker starts from the left wing, with Duncan setting a screen for Tony to go right, which is his stronger hand. Since Bynum has no chance of stopping Parker on the perimeter, he stays deep in the paint deterring penetration while Blake goes behind the screen to contest a potential jumper and impede Tony's path to the basket. 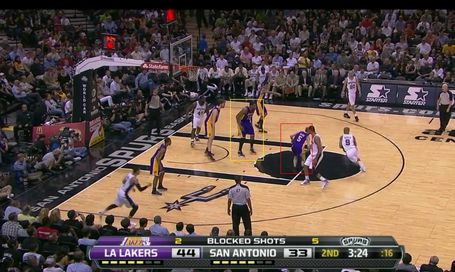 Blake has cleared the screen and is on his way to be in front of Tony. Bynum stays deep in the paint to contest Tony if he goes to the hoop instead of returning to his man who is on the perimeter. 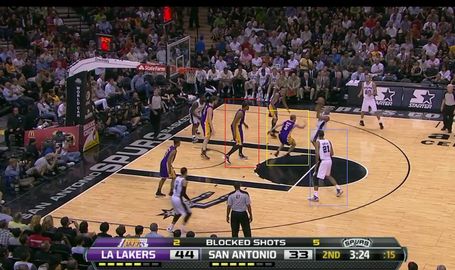 With Blake back on him and Bynum still protecting the paint, Parker picks up his dribble and finds a wide open Duncan on the left elbow. 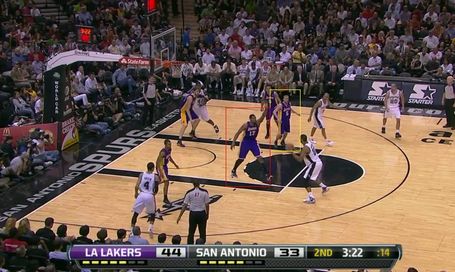 Duncan catches the ball with enough space to shoot a jumper if he wishes or attack Bynum off the dribble. Bynum has to honor Duncan's range and closes out aggressively. In this particular play, Duncan puts the ball in the floor, but as I mentioned, and as we've seen countless times this season, Duncan has the option to pull up and shoot before Bynum closes out.

Why is the Parker Duncan pick and pop effective?

Duncan's range adds a different threat. Tim has the option to roll to the basket or pull up for an open shot, while guys like Blair and Splitter have no option but to roll hard to the basket. The fact that Duncan is usually guarded by guys that are not too fleet of foot, means that Parker can blow by them if they try to show hard, or he can pass to a rolling Duncan before they can recover. If the secondary defender sags off Duncan to deter penetration, Parker can pass to Duncan for an open shot, as the example shows. If the pick is actually effective, and Tony's man lags behind him, the he will have all the time in the world to pull up from mid-range, just like he did so often Tuesday night when the Spurs visited the Lakers.

And now one of my favorite plays: Parker-Bonner-Splitter double screen

Unlike the others, this play comes from the game in LA. 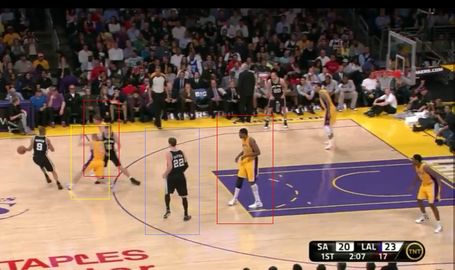 The play starts with Bonner setting a pick on Parker as Blake tries to fight through it instead of going under it, which forces Murphy (mostly hidden behind Bonner in this image) to show. At the same time, Tiago Splitter is lurking right behind the play. 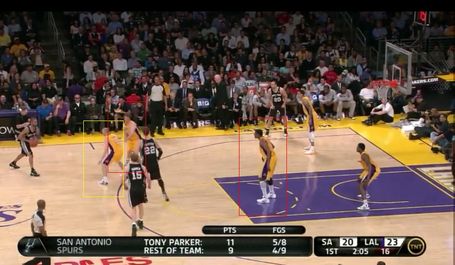 When Blake recovers, Murphy tries to rush back to cover Bonner, who is now moving to the opposite wing behind the 3-point line. Splitter, then sets a second pick, this time on Bonner's man, to give Matt more time. Bynum has gone to the paint instead of following Splitter to the perimeter, probably thinking Tiago was simply going to set a pick for Parker. 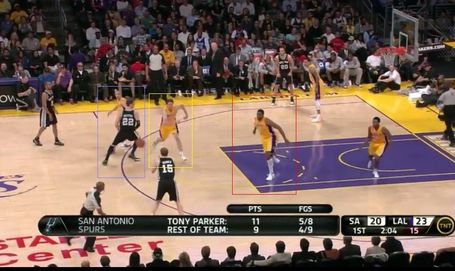 Tony swings the ball to Bonner, who has all the time in the world to shoot, since Murphy has lost a second on the Splitter screen and Bynum is not fast enough to close out from that distance. Bonner sank that shot.

The beauty of this play is that if Blake goes under the screen and Murphy can recover in time, the Spurs still have the chance to immediately start another P&R set with Parker and Splitter or Tony can give the ball to Manu in the corner to run the P&R with Tiago from there.

As these examples show, the Spurs run variations of this play and have other ball handlers that do things differently than Tony. Tomorrow, I'll post the second of this series and evaluate some of the other P&R pairings and look at how effective (or ineffective) they are.