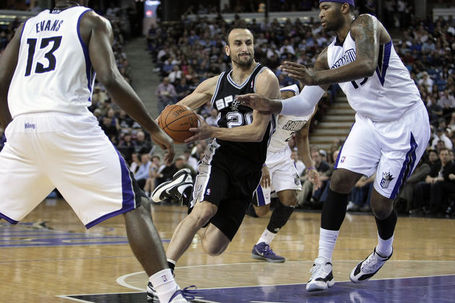 Spurs play tonight without Tim Duncan, who played last night in Los Angeles (Boris Diaw starts in his place). The Spurs initial game was a little to be desired, at one point trailing 0-6. After a quick timeout, the Spurs come out scoring 7 straight points. The old Pop B12 shot. The bench of Gary Neal, Matt Bonner, and Tiago Splitter finish out the end of the 1st. Boris Diaw, Tiago Splitter, and DeJuan Blair all had turns guarding the Sacramento Kings star Demarcus Cousins, and they all did well. The Spurs lead after 1, 29-28.

Pop continues to play the bench through the entire 2nd quarter. Seems like a preseason game, playing without Duncan, Parker only playing 12 minutes, Manu playing 9. Then again, the only reason Parker and Manu are playing is probably in response to criticism of resting all of the big 3. Spurs lead 58-57 at the half.

Kings with no chance in the 4th quarter after Demarcus Cousins fouls out with 8 minutes left in the 4th. Spurs win handily 127-102.