State of the Spurs: Is Tony Parker the Spurs' Best Player?

Share All sharing options for: State of the Spurs: Is Tony Parker the Spurs' Best Player?

[Editor's Note: Expect more coverage throughout the day. There'll be another FwtE piece, as Chris of SS&R and I continue the 10 days of SpurLakers, and I'm also going to do a story on how Duncan's defense on Bynum in the 2nd quarter took the Lakers' big man out of his rhythm, and out of the game. But first, here are some thoughts from Big50. -jrw]

So after last night and the glorious victory filled with sweet sweet revenge, I have a question: Is Tony Parker the Spurs best player? I think most here and probably in all of Spursdom would, in fact, peg Manu Ginobili as the Spurs best or, at least, most important player. And while there's certainly some validity to that argument, I'd like to highlight some stats, see where they lead us, and look at a couple of other things I've been Pondering this Wednesday morning.

Tony Parker is 4th among Point Guards in PER, and 19th overall. Manu is 10th overall. Parker has a Win Share of 6.4, the next closest is Tim Duncan at 5.5. Parker has a 40% Assist Percentage. Meaning that when he's on the floor, 40% of the baskets made by his teammates come from his assists. The next closest on the Assist % is Ginobili at 29%. Parker also leads the Spurs in scoring and assists at 18.6 ppg and 7.7 apg. While his offensive rating is 111, which is surprisingly only good enough for 6th on the Spurs roster, it's when you start looking into defensive stats that the case for Parker falls off the table and Manu's does not. That said, I don't think it's a stretch to call Parker the Spurs best offensive player right now, and possibly their most important offensive weapon. See last night's performance as Exhibit A.

I like Stephen Jackson, I really do. I think he's an upgrade over Richard Jefferson in nearly every way. While that's just my opinion, I don't think this is: Captain Jack has got to improve his 3-point shooting. I was travelling last night and had to listen to the game on the radio, doing that often makes me pay much closer attention to the action. The Spurs had one or two chances to really blow things open, before they actually did. Two times come to mind when Jackson was open for a three and missed. I'm probably nit-picking here, but in the post-season Jackson is going to have to keep teams honest and hit his out-side shots.

My coach could beat up your coach

Gregg Popovich proved again last night that he can change. Granted, I was in the camp of benching Blair long before Edg5's article on the same, he just said it better than I was even thinking it. I think Pop finally saw that regardless of the edge that DeJuan Blair gives you in offensive rebounding, his defensive lapses are too much for this team to overcome against a quality team like the Lakers. Tiago Splitter got the start last night and didn't have a great game, but he will improve. I'm not saying the Blair doesn't have value, I think he's very good against certain teams and will provide the Spurs with a nice bench guy that will be hard for the other team to match up with. He just isn't one of the top 3 or 4 big men on this team.

I know I've said this before, but you'd be hard pressed to come up with 5 bigs in the NBA that are clearly better than Duncan is right now. Timmeh is doing it all and he's looking good doing it. I think that this team with this version of the GOATPUFF is better than last year's team -- and it's not even close. Duncan just looks fit and ready to roll every night. I don't see the signs of fading that we saw last year. Perhaps it's the shorter season, perhaps Tim is just in better shape. Perhaps last year's knee-grab-collapse incident against the Warriors pointed to a larger issue than we thought at the time, caused lingering problems for him during the playoffs, and took the greater part of a year to fully recover from. Whatever it is, he's playing really really well right now and that makes this Spurs team all the better. 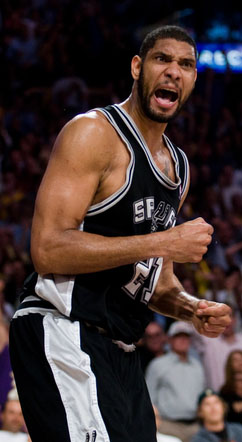 I'm still not sold that the Spurs' depth will be a huge benefit in the playoffs. Teams, including San Antonio, almost always cut their rotation down in the post-season. I couldn't begin to figure out how the current rotation will be cut down for the second season, but I'm pretty sure it's going to happen. That said, it sure is nice having this many quality guys to run out there with the games coming as close together as they are doing the current Triple Lindy. The huge drop off from starter to bench just isn't there with this team. The versatility in lineups that it allows Pop is quite something. I really hope that can be translated to the playoffs, but I'm just not sure how it's going to work.