Spurs Put the Lakers in Their Place

Share All sharing options for: Spurs Put the Lakers in Their Place

On the second game of a back to back, with tomorrow's game looming, the Spurs dominated the Lakers in a 112 to 91 victory. The Spurs came to play and the Lakers could not avoid being victimized. From the start, the Spurs' intensity was evident and it did not let up for 48 minutes. The Spurs played a complete game and when they do that, defeat is unfeasible.

The Spurs and Lakers spent the first quarter and part of the second trading baskets. I loved the Spurs pace and was confident that they would eventually pull away from the Lakers. It would soon happen because big teams are not built to keep pace or play from behind. They are built like a run first, defensive oriented football team. They require the lead in order to carry out their game plan. Without it, you have Kyle Orton attempting 50 yard bombs; it doesn't work. To play from behind, you have to have fire-power and teams that depend on bigs just do not have that comeback capability. They want to slow it down and take high percentage shots. When behind, this strategy is worthless.

With 5:01 remaining in the second quarter, the Spurs began their expected run. It was a thing of beauty to behold so let's quickly jump into FARS mode and experience the Spurs' potential, together.

The Spurs are on on a fast break and Tony wisely slows down in the open court to draw both defenders; he slips a pass to Captain Jack for the uncontested layup. Tony +5, Jack +5.

Parker pick and roll game with Diaw ends with a Danny "Big" Green wide open three pointer. In our last game against the Lakers, Tony missed everything. Everyone missed everything. This allowed the Lakers to go under all screens and crowd the paint. Without the usual seams, the Spurs were forced to settle for the wide open jumpers and they missed everything! This game against the Lakers was more consistent with the Spurs' resume in that we didn't miss every shot. The Lakers were forced to guard our intermediate shots and therefore the lanes were open. This allowed Tony the opportunities that were not available previously, and thus a wide open three pointer for Danny "Big" Green. Tony +5, Danny +5

The Spurs steal the ball and initiate the fast break. Tony hits Tim, who finds Danny Green wide open for another three. Danny +5

Barnes misses a three point attempt and the Spurs begin a semi-fast break. Yet another difference between this game and the previous one we played against the Lakers. Barnes and Artest are not very good. They are competent, yes, but they are not the All Stars that we encountered a week ago. Tony pulls up in transition and sinks the bucket he's been making all year. Time out, Mikey. Tony +5

Manu uses Diaw's high pick to isolate Gasol on the perimeter. He doesn't hesitate and takes him right to the rim for the score. This is Manu regaining his Manu-ness. He's really getting up there on his layins. I was nervous a few weeks ago because everything was below the rim. He's now looking down at the rim and all is good. Manu +5

Danny "Big" Green steals the ball and just before he falls over the baseline, he skips a pass to Manu. This was an amazing play by Green. He had a few safer options around him, but somehow picked up on a streaking Manu and hit him perfectly. Manu took two dribbles and made a pass that only he can make to Diaw for the layup. Danny +5, Manu +5.

Danny comes up with the steal and the Spurs are out in transition. Tony slows things down for a second to receive a screen from Duncan. Both defenders follow Parker to the basket and he kicks it to Tim for a mid-range jumper, splash. Danny +5, Tony +5, Tim +5

Tim sets a very high screen for Tony who comfortably dribbles into his comfort zone and drains the mid-range jumper. It's so simple, yet he missed it every time last game. Tony +5

"Ginobili putting moves on Ebanks and sweeps the lane, banks it home." -- Marv Albert
Yes, it was a great move, you depraved little man, you. Manu +5 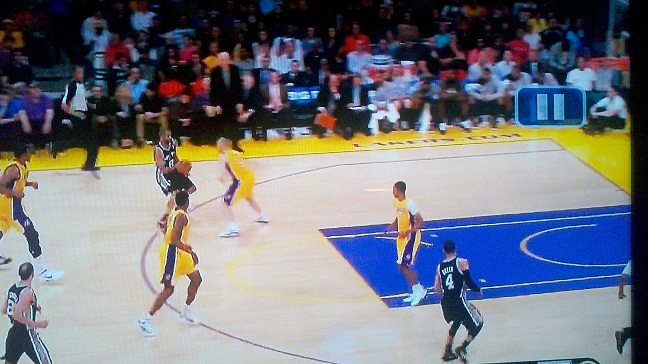 This is Blake before the crossover. 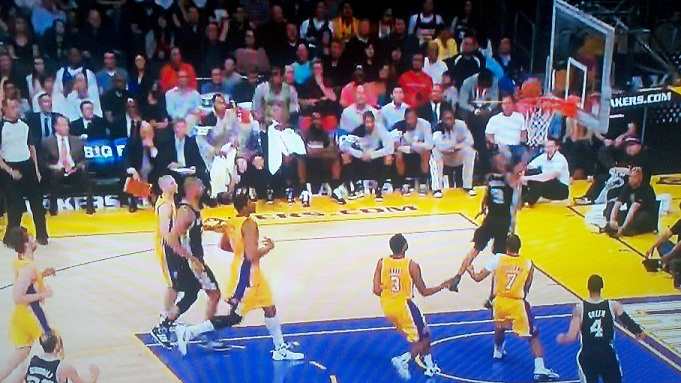 This is Blake after the crossover.
Tony + INFINITY.

That was the run that finished the Lakers. They would eventually make it somewhat uncomfortable, but Pop put Duncan back in and that was that. It was a great win and I would argue that it was not a fluke. The Spurs played as they had all year and won convincingly. This is what our team does. When we play to our mean, we win.

The flukyness of the previous game has been well documented by our esteemed leader and his Laker counterpart. In our first encounter, nothing made sense, given what was proven throughout the entire season. Tony missed every jumper. The Spurs recovered one offensive board. Ron Artest scored 26 instead of 7. Bynum grabbed 30 boards. In that first game, nothing that happened was expected. In this game, we returned to the mean. Tony made the shots he's made all year. Manu played like Manu. Tim played his game. The role players stepped up. This performance is what we should expect from our team. If we play the Lakers in the playoffs, you now know what to expect. We will dominate as we did tonight. Fluky games happen, bet on what is expected. The Spurs should handle the Lakers, easily.

I depised the national media for claiming that Bynum had his way with Tim in our last meeting. Tim covered Bynum for 5% of the game at most. It was DeJuan's fault. In this game, we saw that Tim can definitely give Bynum trouble. Drew is large, but he's not as smart as our big guy. Tim played a great game and saw to it that the Spurs got their revenge.

He's been in a slump recently. I don't know what caused that but I do know that he jumped out of it against the Lakers. He easily returned to his MVP form and the Lakers had no answers the entire night. It was fun to watch. As always, Tony must dominate Fisher, even if he is not present.

I'm pretty sure he reads blogs. I mean, he has to, right? Well, when it's this obvious, maybe everyone spontaneously comes up with it on their own. DeJuan cannot play against the Lakers or any team that features elite big men. We need to counteract their bigs with our own. If we keep the momentum in check, their role players will not dominate. Popovich benched Blair in favor of what made sense and the Spurs benefited. I'm elated that it did not take a few playoff losses for him to see the light this time around. It all worked out and the Spurs won, as they should have.