Poor Sacramento. They are not only the capitol of a state that can't figure out how to balance a check book, but they are also home to a basketball team who's owners appear to want move elsewhere. We all thought the Kings were saved when Kevin Johnson, the mayor and former NBA'er, seemed to have reached a deal with the Maloof brothers to keep the Kings in Sac-town. However, all of that has broken down and it seems as if the Kings are not long for Sacramento, barring some sort of intervention. Of course the lovely people of Sac-town will have at least one more opportunity to witness some greatness as the Spurs come to town. Too soon?

In all seriousness I feel bad for the fans. This seems worse than the Seattle deal and the NBA is going to be left with only one team north of Oakland if their not careful. The Maloofs seem like their getting dangerously close the becoming the next Donald Sterling and that is not good for the NBA. Perhaps the Kings can find a new owner that is committed to Sacramento as our owners are to San Antonio. That's the one thing that always strikes me about these type of stories, never take for granted good ownership that is committed to being in your town and more importantly to winning. 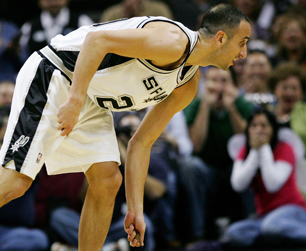 The greatest moment in Spurs/Kings history? I think so.

On to the game. It seems that the Spurs always have trouble with these young. The last time the KIngs and Spurs played, San Antonio won, but in a game that was far to close for comfort. The meeting between these two teams early in the year actually saw the Kings beat the Spurs by two, of course that was back when the Spurs could buy a win on the road. Of course the Spurs are now one of the best road teams in all of basketball. Think about that for a minute. The Spurs started the year off 2-8 on the road and are now a whopping 18-11 away from home, before last night's game.

This is a game that I can foresee several guys getting the night off. The Kings like to run and have young legs. It might behoove Pop to rest some of our veterans on the last of three games in three nights. If the Spurs do rest a couple of the big 3 or more than that, I can't blame them. DeMarcus Cousins appeared to me to be out for blood in the last go around with Sacramento. I'm not sure if he's trying to prove something or if that was an anomaly, but the guy just seems like to hit people. We don't need the Spurs to be taking that level of punishment.

On to the song of the day:

Game Prediction: Spurs bench plays strong and wins a close one to end the triple lindy.