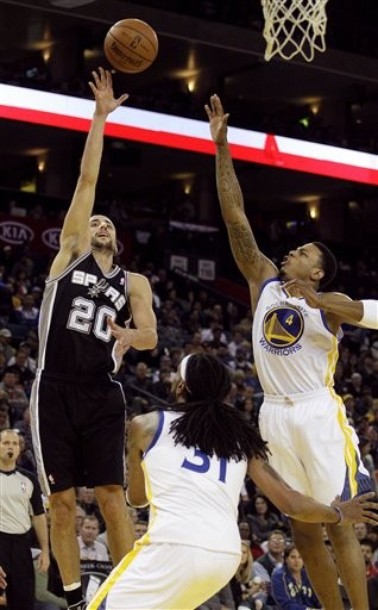 The Spurs regular starting 5 come out very active against a depleted Golden State Warriors team. Spurs shoot 47% through the first quarter. The early effort of Tim Duncan and Kawhi Leonard allowed Coach Pop to bring in the subs. Spurs lead after 1, 39-24.

How about Manu Ginobili? Comes off the bench and tears up the already battered Golden State Warrior team. Stephen Jackson gets the old bronx cheer each time he touches the ball. Despite the crowd at ORACLE Arena's sour feelings, the Spurs hold off any short-lived runs the Warriors make with ease. Spurs lead handily at the half 71-49.

Pop started the bench starting the 2nd half. The work of the starters allowed the Spurs bench to get playing time. James Anderson gets playing time to start the 4th. After the first few minutes of the 1st, the Spurs never look back. They easily defeat the Warriors 120-99.