When the Spurs play in LA tonight they'll face a team defying conventional wisdom and NBA natural law. The Lakers are finally focused and playing the best all-around basketball they've played all season. They're on a three-game streak of satisfying wins, all against western playoff competition... all with Kobe Bryant sidelined. LA has some fierce competition for the three seed and it seems urgency and adversity brings out the best in them, with or without Jordan Light. The Spurs will be motivated to protect the edge we have over the Thunder for the top seed and by last Wednesday's embarrassing loss. Any discord or drama we can inadvertently introduce into the Lakers' locker-room will be appreciated by the rest of the Western Conference as well.

There isn't a regular season cliche that gets trotted out more often than "playoff intensity". This clunker of a phrase is used to describe every bad-blood match-up that could realistically be a preview of the post-season. The truth is there's no way to fake or approximate the effect, both good and bad, of playing an extended series with elimination on the line. It's not bluster to say that if the Spurs meet the Lakers in the playoffs for the first time since 2008 the plan, goals and strategy will all have changed from the this three-game ten-day mini-series. For some teams and coaches it would be ridiculous to say this, but the Spurs probably have a regular-season strategy for tonight's game and a playoff dossier on the Lakers for when the games really matter. When you hold minutes down all year and make a concerted effort to develop depth in the regular season, why wouldn't you take the extra step and save the best strategies and counters for the post-season? That's not paranoia, that's strategy. 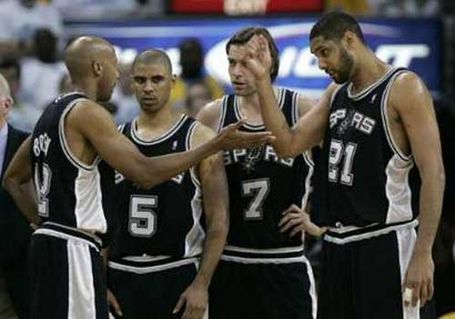 This was the Spurs the last time we met the Lakers in the playoffs. Photo via deadspin.com

The Spurs need to win this game for the Western Conference, which cannot handle a focused and rejuvenated Lakers team. For most of the season LA has been playing beneath their potential as age and inconsistent effort has held them back. There's no Kobe again tonight, which for Spurs fans is a mixed blessing. As Kobe's been out these last five games, two players in particular have gone from inconsistent to stellar in Andrew Bynum and Metta World Peace. Bynum's averaging 16.6 rebounds a game in that span while World Peace's average line is something like 7/13 FG, 2/3 FT. It's sensible to be skeptical of World Peace's resurgence and worried about Bynum's, but the end result is the court is opened up for everyone else.

You've probably come across the 'four factors' of basketball (shooting, rebounding, free-throws, turnovers, and the defensive side of these factors), convenient categories for everything that effects the score or possession. Since shooting is so important you can split it into two-pointers and threes and make it a more numerically satisfying five. (Jeff Fogle likes to do this in recaps on his blog). The Lakers were losing the three-point battle every night - they can't shoot threes (.325%) and their opponents attempt the fifth-most and shoot .345% - but with Kobe out the shooting has improved considerably. The defense however remains vulnerable - even in the horrow-show game last Wednesday we went 13-24 from range. We just need to do a better job defending these easy points to bring out the usual Spurs advantage.

Ramon Sessions has been showing improvement from the perimeter in the short time he's been with LA. He hadn't made more than two three-point attempts in a game with Cleveland but has gone 3-4 and now 3-5 from three against Dallas in a Lakers uniform. For a team that needed a perimeter creator and some three-point shooting Sessions is surpassing any reasonable expectations right now. He distributes the ball, he has his own offense, he seems to be a good fit with Gasol and Bynum. Tony Parker can torch him all night just like he would have torched Derek Fisher, but on the other end Sessions is a big upgrade over anybody else they have.

One area where Ramon won't help is LA's inability to force turnovers. They're the worst team in the NBA at it and are a little worse than average at taking care of their own possessions. The Spurs failed to execute on every level the last time they played the Lakers, but the most disappointing of all was how we couldn't get a good shot from inside the arc. We ended up just 35% on twos and didn't look at all like the team that passes the ball so fluidly and is always baiting their opponents into deeper trouble and further defensive blunders. LA looked so comfortable defending us in the half court, I can't help but wonder if we were using enough of the shot clock or using it wisely enough. If a team isn't going for steals or being aggressive on defense, running second and third plays is better than forcing it when the first one fails.

It's revenge for the Spurs against reformation for Bynum, Sessions, World Peace and the Lakers in Los Angeles. It's 'just' a regular season game, but win or lose it feels like one of those games we'll remember once the playoffs start and mythologize or blame for the good or bad momentum it brought us. Tipoff is at 9:30 and TNT will cut to the action once the ugly Eastern Conference ball (Celtics at Knicks) is concluded.

Game Prediction: The Spurs have a season's worth of experience when it comes to balanced offense and winning the three-point battle. LA has shown improvements in these areaa down the stretch, but with an adjusted plan and a more even effort the SPURS WIN and end the feel-good Kobe-less era in Los Angeles.

1) Tony Parker must utterly destroy Derek Fisher. He must dominate the match-up in a fashion similar to the 2007 Finals. He must continuously get to the basket and exploit the Lakers relative lack of an inside presence. He must make Derek Fisher embarrassed to look his teammates in the eye. Derek Fisher cannot guard Tony Parker. He can't. He musn't. I had musnt in Hamburg once. Really salty.