It has been approximately a month since the San Antonio Spurs have completed the deadline deal that sent the perpetually underachieving Richard Jefferson for the compelling Stephen Jackson who happens to not only embrace pressure but he, on his own account, also "make(s) love to pressure". A deal of this nature -- the Spurs swapped monotonous, unfulfilling production for the potential of something more and, conversely, the potential of failure -- was unprecedented for a franchise that tends to be risk adverse.

Since then the tides of both franchises have changed. In addition to the RJ deal, the Warriors acquired Andrew Bogut (fractured left ankle), whose inability to stay on the court is actually beneficial to a Warriors team that is openly tanking so they can earn another top 10 pick. The criminally inefficient, but exciting scorer Monta Ellis was out. So was Kwame Brown's expiring contract. Defensive wizard and plus/minus anomaly Ekpe Udoh was gone much to the chagrin of the five Warriors fans who care about defense.

The Spurs have since added Boris Diaw and Patrick Mills to the rotation. They have won 13 out of 16 games, including a season-high 11 game winning streak. Their average margin of victory since the trading deadline was 12.6 points. Aside from a couple of noteworthy bumps along the way, Gregg Popovich has seamlessly integrated Captain Jack, Mills and Diaw into the rotation. If I said that the Spurs are now much more prepared for a legitimate title run, no one would flinch. 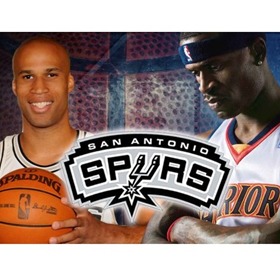 Jackson, specifically, has increased his efficiency and rebounding numbers in lieu of volume. In 10 games with the Spurs, Jackson has corralled 17.7 percent of defensive rebounds (per Basketball Reference) which puts him among the elite rebounding 3s in the league. His 50.6 TS%, while not as high as Jefferson, represents a much-needed increase in his efficiency. Jack has been able to accomplish this because of his aggressiveness and capable midrange game.

RJ, too, has performed adequately with his new team. He isn't apart of the same culture as the Spurs -- the Warriors have gone 4-14 with an average margin of loss of 11.1 points -- and that is actually quite sad. I didn't like RJ the player but RJ, the person, I sympathized with. He was just a guy that wanted to fit in with a team and he attempted to do so, admirably.

So, when we watch tonight's game, just bear in mind how lucky we are to be rooting for a winning team. Spurs fans have been blessed with almost limitless success. Not every fan base will get to enjoy 10-plus years of prolonged success. Passionate fan bases like the Warriors, if everything was fair, deserve a title. But the NBA doesn't work that way. Not every fan can always be happy, not every player will experience the intensity of a playoff game.

RJ was apart of some very talented, albeit flawed, basketball teams that had the potential of winning a title. Ultimately, he and the Spurs failed. Jackson, after experiencing the pinnacle of basketball -- a championship, toiled in basketball obscurity for the majority of his career. In his second tenure of the Spurs, we can only hope that our offense can replicate the amount of success we had defensively in Tim Duncan's prime.

Now their roles have reversed.

Oh how the tides have turned. Let's just hope that the end result isn't the same.

Game Prediction: Spurs Win. The Warriors don't seem to interested in winning so the Spurs should be respectful and take the victory off their hands. If I was a betting man, I would take the over on a double digit victory.