SAN ANTONIO - The Suns might be fighting for that final spot in the Western Conference playoffs, but tonight’s 105-91 beatdown at the hands of the Spurs - a game in which Steve Nash and Grant Hill played very limited minutes - probably has them wondering whether or not it’s even worth it considering this was a potential first-round matchup. Tim Duncan had 19 points and 11 rebounds in less than 24 minutes in yet another "how’s he doing it" performance, and San Antonio blew this thing open from the start, easily handling a Phoenix team that blew out the Los Angeles Lakers just a week ago.

The defense was able to hold the Steve Nash-led Suns to 13 points - a season low for a Spurs opponent in the first period - and Phoenix was never able to recover. Given that Nash and fellow "old guy" Grant Hill combined to play less than 14 minutes in the game, their team had little chance to overcome a Spurs team that had run the lead up to 28 points, 58-30, with four minutes left in just the second period. And without their maestro orchestrating the offense, the Suns managed only 39.6 percent from the floor, including a paltry 12.5 percent from the arc. And really, the final score wasn't necessarily even reflective of the game itself. The Spurs had 24 turnovers in the game, and the nine that came in the fourth quarter alone allowed the Suns to cut the lead to 12 points with just less than three minutes left. I mean, it's not like it felt as if the Spurs' reserves were in danger at any point in the latter stages of the contest, but nine turnovers? I doubt we'll be seeing that lineup late in playoff games.

After two consecutive struggles against big, physical teams in the Lakers and Grizzlies, this was a nice break for San Antonio as the Suns weren't posing much of a threat in the early going on Saturday night. But then again, maybe they were; they just couldn't stop Duncan. Two nights after a 28-point, 12-rebound performance in 35-plus minutes against Memphis, the big man efficiently schooled Marcin Gortat. His face-up game was virtually unguardable for the Suns' center as he continued to show, at 35 years old, he can take nearly any defender off the dribble. Talking with 48 Minutes of Hell's Jesse Blanchard following the game, he pointed out how Duncan's weight loss has possibly left him a little less effective with his back to the basket given the size disparity he faces against many of the NBA's bigs. But he's been able to adjust by using what has become a lethal face-the-basket game. I take that back. It hasn't BECOME that, it's always been there; it just seems to be used more exclusively these days.

Another interesting matchup of the night was rookie Kawhi Leonard on Grant Hill. Leonard, who's nearly half the age of Hill, dropped 14 points, grabbed five rebounds and nabbed two steals as he continues to showcase his all-around ability to fill the box score. But it's his shooting that continues to impress the most. The 20-year-old swingman hit all three of his three-point attempts and five of his six shots overall. He's still primarily just a spot-up shooter and opportunist around the basket off missed shots or steals, but his confidence and ability to work within the system has been so impressive for someone his age. Furthermore, he's really establishing himself as a consistent starter whose cerebral kind of game could transition easily to the playoffs. Of course, we won't know that until the postseason starts, will we?

A major talking point over the last couple of weeks has been the big-man rotation Gregg Popovich has used from game to game. If anyone has a grasp on what it is, please let me know because I couldn't even begin to tell you. After a game against Memphis in which DeJuan Blair didn't even play in the second half, he logged 11 energetic minutes in the first quarter alone. And even more puzzling, one game after Pop told the media he's trying to get Boris Diaw minutes so he would gain confidence within the system, the Frenchman didn't even see the court until halfway through the third period. I realize it's a matchup issue that will resolve itself from game to game, and Blair has a chance to produce more effectively when he's not playing against Memphis or Los Angeles, but it's still all very confusing. Here's what we do know: Duncan will get his minutes and Tiago Splitter will spell the Big Fundamental when he needs rest. We also know that Matt Bonner will continue to get minutes so long as he produces, especially when he's throwing down what Duncan called the dunk of the year (I wish I could supplement this with video, but can't seem to find it). 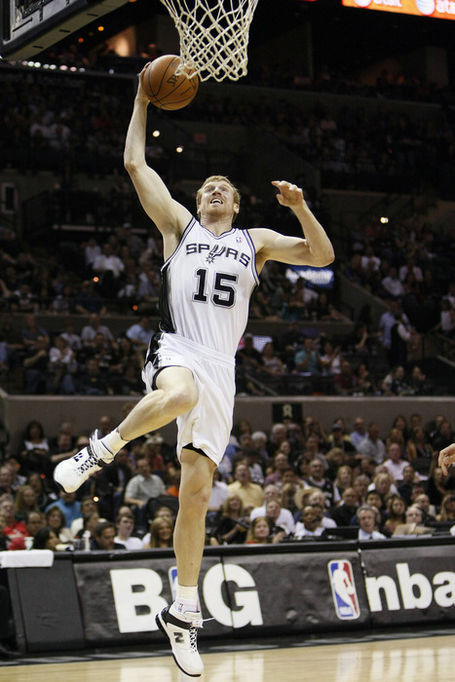 Photographic evidence of Matt Bonner's dunk. Er, almost, at least. Notice the absence of other bodies in the picture.

With the second triple lindy of the season approaching during the upcoming West Coast road trip, the fact nobody on the Spurs played more than Stephen Jackson's 24 minutes is important. Then again, it's really been like that all season. I talked to Danny Green after the game and he reiterated how important this team's depth has been. He also mentioned how fortunate the Spurs are to have that kind of roster balance given the grind of this season. Green didn't play in the second half, and from the sound of it he appreciated the time off.

The slightly elevated level of concern following the loss to the Lakers on Wednesday was understandable, but the Spurs have bounced back to recapture some momentum. The now heavily monitored rebound battle (which will happen when a team outrebounds you 60-33) was won by the Spurs 49-44 one game after tying the Grizzlies in that department. So while it seems now things have calmed down a bit, the next eight games are sure to be crucial as San Antonio remains tied in the loss column with Oklahoma City. And we've seen a "new" Tim Duncan the last two games, one that seems to have that same familiar, killer level of focus. With him playing at an elite level, we've seen more "Four Downs" and double teams on him that I have any recollection of over the past several seasons. If he continues to stay healthy, rested and able to match this kind of production, San Antonio will be in great shape heading into the playoffs, regardless of playoff position.

"We're in a great position right now and hopefully we can end up on top," he continued. "If we don't, hopefully we're number two and we can deal with that."

-- With the win, the Spurs clinched the Southwest Division.

-- San Antonio dominated the defensive boards 39-26 tonight, which is an area it has thrived in for most of the season

-- The Spurs and Suns each scored 52 points in the paint in this game, but San Antonio was much more effecient, going 26-for-40 while Phoenix went 26-for-55 in the same department.

-- Stephen Jackson called Gregg Popovich "Obi-Wan" after the game, saying you never know what he's going to do in different situations. Night complete.