Share All sharing options for: The Spurs MUST Play DeJuan Blair Less

[Editor's Note: This was posted over the weekend, which often means some miss it if I don't repost. Since I feel this subject is important, here it is again. -jrw]

The Spurs took advantage of buyout season in the NBA to bolster their somewhat depleted front court rotation to five legitimate NBA players. Some of us thought Boris Diaw was nothing more than injury insurance and that his days as a legitimate option for a good team were past him. In an admittedly small sample size, Boris seems to have emerged as a real alternative, making minutes in the front court scarcer. Tiago Splitter, who most of us believed would see more playing time as the playoffs drew closer, has only played a shade under 18 minutes the last four games, even though the Spurs were facing some pretty formidable front courts. The Spurs have gone 2-2 in that span even after resting their Big Three against Utah. I'm not as worried about the Spurs' front court weaknesses as some but after looking at the data I came to the conclusion that if the Spurs are to improve their big men rotation, Splitter and perhaps even Diaw have to play more. Whose minutes should they take? DeJuan Blair's.

Looking at the stats, it's easy to see that DeJuan hurts the team. His 2 year adjusted +/- of -4.08 is one of the worst of any rotation player. The team is better both offensively and defensively with him OFF the court, according to both Basketball Value and 82games. He allows his opponents above average PER numbers at the four and the five, and 82games's sortable simple rating shows him to be one of the worst players to play 40% of team minutes in almost every category. The only benefit he seems to provide is offensive rebounding but that is: a) not something the Spurs emphasize and b) something that mostly benefits his numbers while not necessarily helping the team since he only scores 0.92 points per offensive rebound. That ranks him 118th in the league.

DeJuan's a rebounding specialist that doesn't rebound well on defense: the team gets a bigger share of defensive boards with DeJuan off the court (74.9%) than on (72.9%). As Bushka pointed out, Blair's rebounding numbers have fallen off the cliff. After being as good as advertised his first season and putting up elite numbers, DeJuan is now 3rd in total rebound percentage on the team and 5th in defensive rebound percentage behind Duncan, Splitter, Bonner and even small forward Kawhi Leonard. If I included Stephen Jackson (not enough minutes to provide a reliable sample), he would be sixth!. For a guy that is supposed to be earning playing time on his rebounding prowess, that's unacceptable.

Looking at his offensive numbers, nothing positive stands out. While Matt Bonner's questionable rebounding is often quoted as an argument against him, his effective field goal percentage and ridiculously good plus/minus numbers provide a good counter as to why he should be in the rotation; that's not the case with DeJuan. His field goal percentage is above average at .530 but when we consider that almost all of his shots come around the rim, his 64% in point-blank shots (only slightly better than average) becomes much less impressive. DeJuan's bread-and butter on offense is the pick and roll; the Spurs offense uses the P&R a lot and DeJuan's ability to finish those plays as the roll man kept him on the court since Bonner and McDyess were more pick and pop players.

While DeJuan's points per possessions as the roll man are still great (1.16 PPP, good for 17th in the league) Tiago Splitter's are far superior (1.39 PPP, good for 2nd in the league). What Blair does well on offense, Splitter does better (1.21 PPP in offensive boards) and he's a much more productive player both in the post (0.76 PPP for Tiago, 0.68 for DeJuan) and cutting to the basket (1.27 PPP for Tiago, 1.17 PPP for DeJuan). 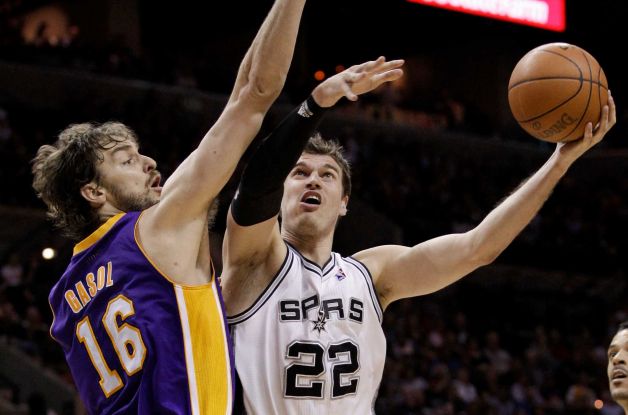 Tiago is almost unstoppable off the pick and roll

On defense, DeJuan is equally limited. He allows slightly fewer points than Tiago per possession both on post-ups, and when guarding the P&R roll man, but his numbers guarding spot-up shooters are the worst of all the Spur bigs. And the points per possession he allows when he's isolated against are almost as bad as Matt Bonner's . But Matty makes up for those by being (yes, it's true, don't laugh) an elite secondary post defender (0.58 PPP; 6th in the league). That means that Splitter is similarly limited at guarding the post but better at guarding shooters and is great guarding isolations (47th in the league), while Bonner is significantly better at guarding the post than Blair. All of the Spurs PF/Cs are doing a good job of guarding the P&R roll man, with Bonner and Duncan excelling at it and Tiago doing fine despite the fact that he almost never shares the court with Tim like DeJuan does almost every time he's on the floor, which serves to improve his numbers. Just think of where they'd be if he didn't play with Tim!

Both Tiago Splitter and Boris Diaw are playing 19.3 MPG while Blair plays 21.1 MPG. Considering DeJuan is an inferior offensive player and only a similar defensive one even while sharing the court with the one elite defensive big the Spurs have, it's not clear why he's been rewarded with so much playing time. And it seems like Pop is starting to realize that. In the last 3 games DeJuan has played almost 6 minutes less than his season average, with a combination of players splitting those extra minutes. By replacing most of DeJuan's minutes with Splitter, the Spurs have the potential to be an even better team in almost every way.

Just the threat of Tiago attacking off the pick and roll is enough to free the Spurs' shooters, which results in an increase in eFG%. Playing Tiago with Tim instead of Bonner will likely decrease that number but some of the team's iffy numbers with Splitter in, like defensive rebounding, should improve by him sharing the court with another solid rebounder. It wouldn't be crazy to assume that most of his defensive and rebounding numbers should see at least marginal (and possibly significant) improvement by sharing the court with Duncan.

Playing Splitter a few more minutes wouldn't necessarily mean having to resort to a smaller front court later, but if Pop wants to limit Tim and Tiago's time together for fear of not having one of his centers in at all times, then Boris Diaw could take some of DeJuan's minutes. In an admittedly small a sample size (too small to draw serious conclusions from) the versatile French forward is proving to be a good defender (his numbers compare favorably to Duncan's) and a solid contributor on offense. Without giving too much credit to Boris' elite defensive figures just yet, he should have the chance to prove himself in a bigger role just because of his offensive talent alone. His 16.5 assist percentage (only behind Tony, Manu and Mills on the team and top five among all forwards in assists) and efficient scoring (well above average TS% and eFG% numbers) make the gamble worthwhile even if his defensive numbers regress a little. We already know what DeJuan can give the team and it's not great; I'd love to see if Boris does better.

The Spurs have better options than DeJuan Blair right now and should explore using them in the time left before the playoffs, so that when the post-season rolls around, they are ready for any match-up. Blair should still see some minutes, especially with the Spurs playing 10 games in 15 days and also when a favorable match-up presents itself, but those minutes should not come at the expense of potentially improving the front court rotation by playing Splitter more and giving Diaw some court time to prove his worth.

(Stats courtesy of Basketball Value, Basketball-Reference and Hoopdata. Special thanks to Josh Guyer for the Synergy Sports stats.)