Share All sharing options for: Spurs respond with gritty win over Memphis

SAN ANTONIO - Ok, friends. This will be short and sweet as I am up entirely too late with work awaiting me at 8 a.m., but I believe Wednesday night’s 2,000-plus word piece inspired at least a decent amount of conversation to keep us thinking in the days to come. Simply put, some wins are more needed than others, and last night’s 107-97 victory over the Memphis Grizzlies came with some relief. We knew heading into the previous two days that these games would offer a true test for the Spurs, and to say that now would be an understatement given the result of the Lakers game. It’s only the regular season, but sweeping the Grizzlies had to be at least a little bit enjoyable for San Antonio.

-- After the humiliating loss to the Lakers which featured a less-than-stellar effort from the Spurs, San Antonio (41-16) came out with a noticeable change in attitude and intensity. Tim Duncan guaranteed a tougher mindset from his team and that came to fruition. It wasn't the prettiest basketball we've ever seen, but the grittiness was back. Duncan was phenomenal, tying his season high with 28 points while grabbing 12 rebounds in 35 minutes of action, and this was on the back end of two games in two days. He continues to turn back the clock, producing vintage performances when his team needs them most. His aggressive mindset has always been there in recent years, but this season it's been his body that hasn't failed him. He's been spry and energetic, and unlike in previous years when his athleticism has taken noticeable dips, he's been able to consistently get the shots he wants when he wants them by beating his man in one-on-one situations. It's been a while since we've seen the Spurs consistently run the "Four-Down" set, but on this night, where the Grizzlies even began double-teaming him, we were reminded of just how dominant Duncan can still be. And that dominance was much-needed.

-- The Spurs once again fell behind this rugged Memphis team in the first half, finding themselves looking at another negative rebounding margin before turning it around in an inspired second half of play. Stephen Jackson said following the game that Gregg Popovich issued a wake-up call at the half, and San Antonio responded to it. After losing the battle on the boards in horrendous fashion at the hands of the Lakers, the Spurs clawed back and wound up matching the Grizzlies rebound for rebound (each team collected 41 boards apiece by game's end), and despite a late-game scare were able to keep composure and close it out to remain in a tie in the loss column with the Oklahoma City Thunder.

-- Tony Parker, who had perhaps his worst game of the season on Wednesday night, was as aggressive on the defensive end as we've seen all year. Although his numbers weren't great with only 13 points and seven turnovers, he showed once again how he's improved as a facilitator with nine assists. I don't know if he's just in a scoring rut right now or if the Grizzlies and Mike Conley really offer that much of a challenge for him. Other than his assist output, the other numbers were eerily reminiscent of last year's playoff series where he struggled mightily. It's going to be interesting as the Spurs move forward to see if he's able to maintain the production we've seen in what is arguably his best season as a professional. But in two games against two very physical teams, his ability to get to his spots for good looks at the basket hasn't been quite there. And when he has gotten into the positions he generally takes advantage of, his lack of rhythm has caused him to miss shots he normally hits. The Lakers and Grizzlies are among the most physical defensive teams in the NBA, so we knew it wouldn't be easy for him as he did seem frustrated at times. But whereas the competitiveness was lacking against the Lakers, it certainly wasn't in this one. And if he is in a rut right now, the most important thing you can ask for is hustle and energy. He wasn't lacking in either of those departments last night. 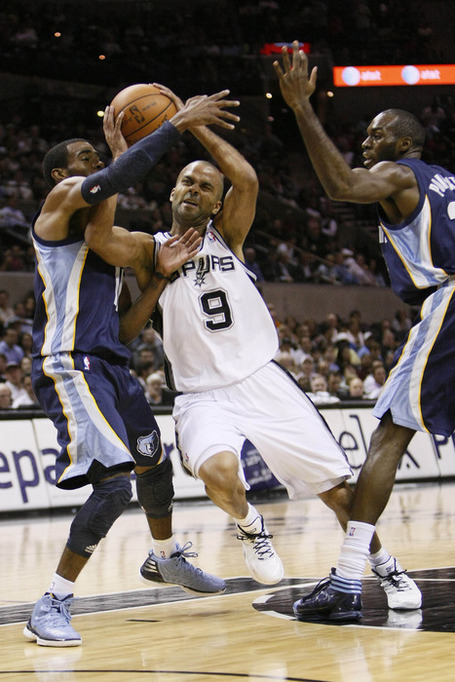 It was another tough offensive night for Tony, but his aggressiveness on both sides of the ball was key in the win.

-- One thing I believe was overlooked in the Lakers game was the absence of Gary Neal. I know he wouldn't have made up the -27 rebound disparity against L.A., but his offense was sorely missed. Neal has become one of, if not the most versatile scorer on the Spurs' roster. His ability to create instant scoring off the bench would have been a big help to San Antonio's stagnant offense in the 14-point loss on Wednesday. He's no Manu Ginobili or Tony Parker, but he has a tendency to shift momentum and hit big shots when needed. He only scored seven points last night, but he has become an underrated part of the offense and a major contributor within that second unit. Looking back to his signing prior to last season, it's safe to say nobody (perhaps with the exception of the Spurs front office) predicted the kind of impact he would have on this team.

-- After last season's playoff debacle at the hands of this Memphis squad, many Spurs fans have developed an understandable fear of the Grizzlies. But this is a different team, especially with Rudy Gay in the mix. His reinsertion in the lineup had most of us believing this team would be even more dangerous, but he has a sort of Kobe-Bryant effect, and not in a good way. His 22 shots were more than the 18 Marc Gasol and Zach Randolph combined for, and that really takes away from this team's effectiveness against a Spurs side whose primary weakness is contending with strong front lines. With no Shane Battier, Sam Young and Darrell Arthur, Memphis has a different look and plays a slightly different brand of basketball that doesn't really exploit that weakness. And although there is kind of an inherent fear of the Grizzlies' big men after that playoff matchup, Randolph and Gasol don't hold a candle to Pau and Andrew Bynum. This is a different team, and if the Spurs are able to play their game at a high level should the two meet in the playoffs, Memphis does not match up nearly as well with San Antonio as it did last season.

-- Manu Ginobili seemed to take this one personally. His 20 points, including a perfect 11-for-11 from the stripe, and attacking mentality were one of the catalysts in this game. He looks healthy and we all know how important that is. Just keep your fingers crossed. 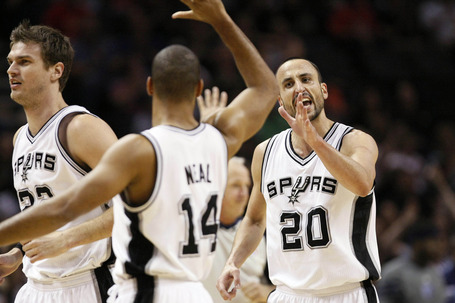 Manu was not messing around last night.

-- Another quick observation: Boris Diaw started the second half in place of DeJuan Blair, further raising the question of whether or not he will be a factor come playoff time. He can surely exploit certain matchups, but when the game slows down and moves toward a more halfcourt style come postseason play, Blair might have trouble seeing time against the bigger teams. Again, his energy and physicality is what makes him an above-average player, but we've seen that negated when he has to match up with the giants of the Western Conference.

It's strange how quickly things can change over the course of a year. Just five days ago the Spurs were firing on all cylinders during an 11-game winning streak that saw them scorching the nets and looking like an unstoppable offensive machine. But we must take into account how demanding the schedule has suddenly become. The fluidity we saw recently isn't there right now, but the effort definitely was evident last night. And when a team isn't clicking the way they were accustomed to, outright competitiveness is all-important. With the depth and talent the Spurs possess, hustle and energy can help a struggling team overcome roadblocks that have a frustrating effect on the psyche. The schedule ahead is no less demanding, so the Spurs will just have to continue to grind through the remaining nine games before the playoffs begin. But for now, tomorrow's day off before a hot Suns team comes to town will be very welcomed in that locker room.

So much for a short post, huh? I guess "shorter" would have been the more appropriate word.