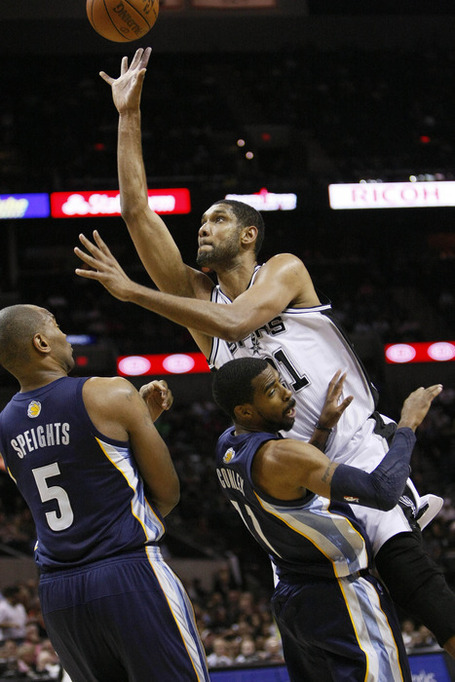 T-1000: Are you the legal guardian of John Connor?

Conley: You could if he were here. He just took off on his bike. So, he could be anywhere.

Conley: Yeah, sure, hold on.

Speights: Could you tell me what this is about?

Conley: No, go on. There was a guy here this morning looking for him, too.

Speights: Yeah, a big guy on a bike. Does that got something to do with this?

T-1000: No, I wouldn't worry about him. Thanks for your cooperation.

Spurs start with the same starters as the night prior-- Tony Parker / Danny Green / Kawhi Leonard / Tim Duncan / DeJuan Blair. The spirit of the players looks up. Parker and Duncan looked extra aggressive compared to last night. The Spurs were in fact much more aggressive, as Marc Gasol was called for a technical foul at 9:27 in the 1st. The second team (Parker / Manu Ginobili / Stephen Jackson / Matt Bonner / Tiago Splitter) came in and produced. They looked much more in sync than last night against the Lakers. Spurs up after 1, 27-21.

Spurs started holding the same tempo for the first 4 or 5 minutes. It was at this point that the pace turned in favor of Memphis. A little more than halfway through, the Spurs were behind 44-36, mostly due to poor offensive shot selection.

To start the 2nd half, Pop puts in Boris Diaw instead of DeJuan Blair. The tempo remains in the favor of Memphis. The Spurs stagnant on offense; a lot of holding onto the ball and bad shot selection. Tim Duncan and Kawhi Leonard step up, are the most active on both sides of the court. Tony Parker was surprisingly ineffective on the offensive end for the second night in a row. At the end of the quarter, Manu Ginobili provided an incredible boost to the Spurs team, as he was very active on the defensive end stealing balls, blocking shots by Zach Randolph. He was also active and "in-your-face" on the offensive end, whirling and spinning, finding himself wide open. At the end of 3, Spurs up 82-74.

Manu starts the 4th the same way, diving to prevent the Grizzlies from inbounding the pass to start! The momentum is brought back into the Spurs end thanks to no one but Manu Ginobili. The Grizzlies had no answer for his game. A strange lineup decision late in the game, as Pop has Green in as the 2/3. The game stays close due to physical play on both sides of the game. To close the game, Parker/Green/Manu/Bonner/Duncan. Manu is the closer, hits critical free throws to finish the game. Spurs win 107-97.