Tonight the Spurs host the Memphis Grizzlies for the fourth and final meting before the post-season starts. The Grizzlies rudely bounced the Spurs from last year's playoffs, but this year San Antonio has won all three match-ups and kicked off the season and a big streak with wins over Memphis. While 'da NBA Bears are wrestling both Los Angeles teams for seeds three through five, the Spurs and Gregg Popovich have one of the top two basically secured. Since it's not clear if Pop cares which we end up with the Grizz could have a big advantage in star-minutes.

Both teams are finishing a back-to-back tonight and both are in the midst of a compression-chamber lockout-shortened marathon. They each play eight games in the next twelve nights. Don't be surprised if we learn Tim Duncan or Manu Ginobili are going to sit this one out, a maneuver refereed to as the Popovich Sacrifice. Since we'll be scheduled for back-to-backs in the playoffs, I think this year the technique is as much about getting role players prepared as it is resting the starters. Depth in the NBA is a dangerous thing to invest in as having more than eight or so quality players is often wasting resources come the playoffs. This year you have to lean on a bench a bit more, and with a deep roster the team doesn't tire out as quickly in the first two rounds (the 'Lightning Round').

Memphis is probably not thinking this way. The Grizzlies are trying to host their first playoff series in team history and won't be holding anything back in their last regular season games, let alone rounds one and two. In their last four games they've beaten the Heat, Mavs, Clippers and Suns by a combined forty points. Just getting to the Conference Finals would be a tremendous victory for them - something you can't say about the Spurs. Duncan, Ginobili and Parker are a living memory of championship success and they're looking to prove it's not just nostalgia, it's precedent.

They'll need depth and a variety of skills to make it back to the Finals this year. By my count, the top eight for the Spurs are four frontcourt players, Parker, Ginobili, Green and Leonard, which means 'the help' would be Stephen Jackson, Gary Neal, Patty Mills and the fifth big. The remaining regular season is more about seasoning for this group and the playoff neophytes than about winning the Conference. 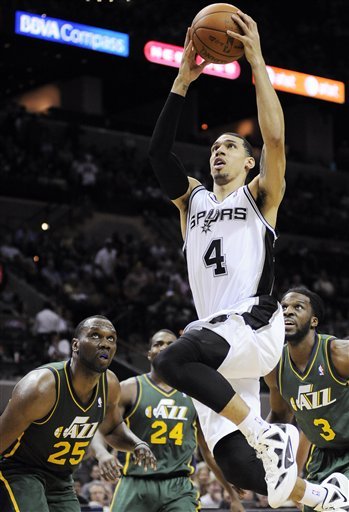 Danny Green gets ready for the playoffs. AP Photo via Yahoo Sports.

The Grizz have mostly the same players and profile as they did last season. They force turnovers, they scrap for rebounds and easy points. A late trend that worries me is they've been getting to the line more than their opponents, this adds a dimension to a team that will probably be outmatched in shooting efficiency no matter who their playoff opponent is. Memphis is below-average on offense and just average on defense in that regard.

Gasol and Randolph are still the biggest match-up problem for us. Randolph is their best player, or will be by the playoffs, but Tony Allen embodies the pesky defense and grit that helped them upset us last year. I checked his twitter feed for injury updates (he's game to game with an lacerations on his face) and here's what I got:

Tony Allen ‏ @aa000G9 I was going through some things , then I took off like a plane ,ion care nutn about no fame!!!

Make of that what you will. For half-time entertainment I'd like to see Dejuan Blair challenge him to an incomprehensible tweet-off. Check the comment section for updates on lineups and player availability, which are subject to change even more than usual.

Game Prediction: If the Spurs field at least two of the big three, they'll be able to squeak out a win and a regular season sweep. With home-court and the excellent bench play we've enjoyed lately we can dissuade them from arranging a first-round meeting a second time.