Fraternizing with the Enemy: Kicking Off 3 Laker Games in 10 Days

Share All sharing options for: Fraternizing with the Enemy: Kicking Off 3 Laker Games in 10 Days

So, there's a dream, then an idea, then a plan, then the agreement, and finally the execution -- without which nothing becomes a reality. Because of that, you're going to be treated to all of the above, except the execution. These Fraternizing posts are my favorite thing to do in the site, and I like Chris from Silver Screen and Roll as much as I can like someone whom I've never met. That said, with all of the Spurs' games with the Lakers smashed into a period that's even less than a fortnight (I just love that word, don't you?) we don't really HAVE to make a single conversation that touches on everything it needs to, do we?

What follows is a prelude, a preamble, an appetizer (if an 1800 word post can be called an appetizer) an introduction to what will be. So, enjoy it as much as you can, and be ready for more from the two of us. Go see Lakerland's side of the conversation here, and mind your manners. 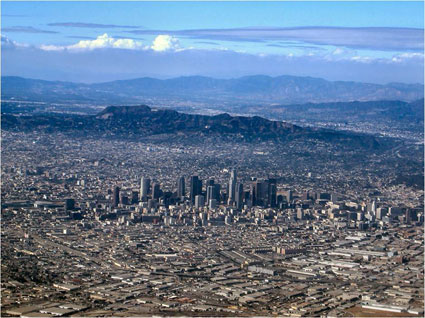 The City of Angels, where JRW will be in less than two days
Wendell Cox: www.newgeography.com

I know I was supposed to wait for you per our agreement, but I just couldn't wait any longer otherwise it'd be FAR less epic. As a rabid procrastinator, I've learned that after a certain amount of time has gone by, chances are that I've had the several opportnities to do whatever I've been putting off, but I just spent it on something else. Something else I've learned now that I'm over forty, much of my procrastinating isn't simply putting things off (although I'll admit that there's plenty of that, to be sure) but it's instead me paying too much attention to a vague feeling that the task I'm about to start isn't the most important one I should be doing. That feeling gets me started thinking about all of the different things I need to do. That thinking gets me into a prioritization mode where I often get stuck endlessly shuffling a list of tasks in my head without ever finding the one that seems to fit the initial vague. And stuck in this cycle, I become exhausted and it becomes very easy to start procrastinating on just about anything that needs to be done. And there you have it: my theory on why it's been over a month since you said you'd start our dialogue. But that could just be me projecting my issues on you. You're probably legitimately busy.

That said, the Lakers hosted the Trail Blazers last night and won big, even if the eventual margin of victory wasn't too large, I see that they were up by 30 in the first half, by a score of 37-7. That big number is pretty impressive.

A thirty point lead is something. Scoring thirty-seven while keeping your oppenent below eight - that's something else entirely. There are slow starts where a team just comes out cold, but it seems like the team down early usually comes back to get it close, or tie the game, within the first few minutes, or at least before the 2nd quarter begins. (I'd love to see some stats on this so I could know for sure) But the 1st half of the Portland game is just impressive and doesn't happen without some serious defense being played by the starters AND the 2nd team. Almost 16 minutes into the game and still stuck on lucky 7? Wow. Some of that is on Portland to be sure, but the Lakers have to get a good portion of the credit for that.

Has your defense been that good this year? Did Brown make a change recently? Are Ronald William Artest, Jr's ultra white shoes distracting shooters because of how bright they are? What's going on over there when Kobe's not dominating the ball (which is all anyone outside of LA seems to be able to talk about besides Pau being traded)?

I AM legitimately busy. I'm working harder than I've ever worked before at a new job, although to be fair, that's a pretty low benchmark to surpass. Still, the long hours certainly gave me less time than I'm comfortable with when it comes to enjoying my home life, watching my favorite sports teams, and providing the foundations for an epic exchange. I am also illegitimately busy. I can not force myself to give up leisure time, so instead of doing important things like household chores, errands, and sleep, I literally require of myself the same amount of time for video games/sports/etc. that I would normally take. Compounding matters further, I made a purchase that was equal parts inspiration and stupidity, and now I am forced to sacrifice far too much time at the altar of Skyrim. Still, its important that we backtrack and explain to folks why we're here.

J.R. Wilco - Have you ever been in a dance class where you are supposed to switch partners every couple of minutes, only you find one partner in the group that just seems to know your every move before you make it, and you know theirs as well? And for that brief period of time, the world is perfect and everything is great, and then you have to switch partners again, and it's just not the same? It's not your new partner's fault, he/she is doing the steps perfectly well, but the connection just isn't the same? I guess all I'm trying to say is that I miss our exchanges.

C.A. Clark - I'll do you one better. Take that same analogy, and imagine a world in which, without that special partner, you don't even get to dance. That's me. And I miss our exchanges too. I was actually just thinking the other day about how sad I was when the Spurs crashed out of the playoffs in round 1 last year, because I was so much looking forward to two weeks and seven games of PTR interaction. It hurt almost as much as my own team's crash out just a few days later. I circle Spurs games on my calendar as something to look forward to. Speaking of which, when is the next game?

J.R. Wilco - In April. All three Spurs-Lakers games this year take place within a three week time span at the end of the season.

C.A. Clark - Man that sucks. We already get so few opportunities, and now we have to cram it all into a three week time span ... unless ...

J.R. Wilco - YOU COMPLETE ME. One condition though ... you have to start.

So there you have it, folks. JR and I shared a straight up American Tail moment, and as a result you'll have six weeks worth of behind the scenes banter which can only hope to live up the magical hype we've created in our heads surrounding previous interaction. You now also know why we start with curious mentions of epic exchanges and procrastination. Now back to the fore.

Yes, the Lakers did look particularly good defensively that night, didn't they. A quick check of basketball-reference.com will tell you that the Lakers are most certainly not capable of that kind of defensive performance every single night, but the Lakers do have a pretty decent defensive record. They actually started the season much stronger in that regard. They started the season in the top 5, then slipped to the top 10, and now are 12th league-wide. But the real miracle of that performance wasn't Portland scoring 7 points in 16 minutes, it was the Lakers scoring 37. The Lakers have been holding folks to low scoring games all season, and still losing because the offense is a miserable experience for everybody involved. The team, the fans, hell, even the opponents take no joy in the Lakers offense. It must be incredibly boring to defend against. That Portland game would have been the first time the Lakers scored more than 100 points in nearly a month if not for the fact that Phoenix's terrible defense beat Portland to the punch a couple days earlier.

I'm not going to lie to you, things are going a little bit rough in Lakerland. Tempers are flaring, the team is completely dysfunctional, and I may have recommended that the Lakers front office be executed via guillotine. One of the things that really stood out to me as I wrote it the other day was that this is what it looks like when an empire crumbles. It is rarely a pretty sight. As soon as I composed this thought, my mind immediately turned to the Spurs. What do we make of them? Tim Duncan's time in silver and black is most certainly deserving of the same kind of empiric analogies that Kobe Bryant's Lakers receive. The Spurs empire was pronounced dead years ago. Last year's 60 win squad seems indicative of an empire that is still strong, but the 1st round crash out, and more importantly, the predictability of such a seemingly rare event, complicates things. This year, Manu Ginobli has already missed a significant slice of time and yet there the Spurs are, 24-10 and the 2nd best record in the West. What's the deal? Are we to assume that because their performance is still strong, they are still an empire to be feared at season's end? Or are the Spurs the rare entity that is in the process of fading from greatness to obscurity with grace and calm?

So much has been said and done by our teams since I last checked in with you. I'm once again in the uncomfortable position of wondering where to begin when there's so much to talk about. But I guess I could do worse than picking up where you left off, wondering what to make of the Spurs. While I suppose it's accurate to say "The Spurs empire was pronounced dead years ago," it's certainly not complete. It was also declared deceased the year after that, the year before last, the years in between, last year (at the beginning and after the end) and also during the past off-season and at the start of this year. But in true Spurs fashion, even the can't-believe-Michael-Myers-still-hasn't-died story is still one of the less played memes of the year.

As far as your team is concerned, you have a LOT to answer for. The Mike Brown in L.A. thing, the Kobe in a mask pictures, the Bynum benching, the Kobe benching, the Ronald William Artest, Jr. name-change thing along with his throwing the ball the wrong way thing. Add the fact that Kobe actually has actually been held out of games and won't be playing tonight and I'm beginning to question the meaning of life over here. Sure, you guys are kinda sorta holding things together over there as far as your record goes, but the Lakers seem about as in control as Ozzie Guillens' public relations firm. Whew! Please tell me you have something to say that will make me feel optimistic about our clubs meeting up in the playoffs.