Well here it is. The game I've been looking least forward to for quite some time now. We never like it. Sometimes they go our way, sometimes not. Last season against them was better than the previous two, if memory serves. And this year, I hope is even better. We'll find out if our guys are truly prepped, or not. It really doesn't matter if they're down a few players, or not, as long as they've got the one guy the one on the floor that matters. And you can be darn sure he's ready. And he wants this one. Tonight we have our first of three match-ups in nine days against the Los Angeles Lakers.

I was a tad sad to see our 11 game win streak come to a halt. However, it's good for Tim, Tony and Manu to be rested coming into this game. According to multiple sources, Kobe Bryant will not suit up for the Lakers tonight. I'll believe it when I see it. I'm listing him in the line-ups because he's going to play, and you can bet your lunch money that Pop is planning to coach the Spurs against him tonight.

Things are never dull in La-La Land. It's been another interesting season of contention for Kobe and Co. Before the lockout ended they appeared poised for revenge. Ready to avenge their early play off exit to Dallas with all of last years starting lineup returning. They nearly pulled off an blockbuster trade that would've sent Lamar Odom and change to New Orleans for Chris Paul and change. But David Stern wasn't having it. Then they almost traded Pau Gasol to Houston, but that wasn't happening. Then there have been the ongoing, never ending Dwight Howard for Andrew Bynum rumors. But that didn't happen. What did happen, you ask? As if you didn't know already. Feeling eternally betrayed by the fact that his name would dare be mentioned in any rumor regarding the most popular team in the NBA, Lamar Odom himself demanded a trade from the Lakers. Apparently, if he was to be mentioned in any rumors, they'd better be per his own request. He was traded to the Mavs, which as if you hadn't already heard, didn't quite work out very well for either party. He lasted 50 games, established career lows in nearly every category, and failed to put forth any effort to mesh with the team find his niche in the rotation. As of Monday, after trade deadline buyout speculation, and an earlier leave of absence from the Mavs, he and the team decided to mutually part ways. Best of luck in your return to South Beach, Lamar. 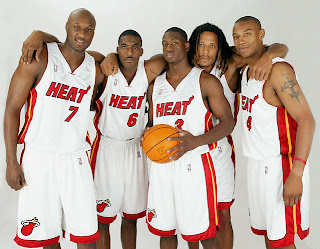 In addition to the Odom saga, on trade-day the Lakers traded long time starting point guard Derek Fisher to the Oklahoma City Thunder in a deal that eventually brought them some much needed talent at the position, in Ramon Sessions. Needless to say, the results have been...over .500 at least. The Lakers are 8 - 6 since March 15th. In looking at their schedule, since the trade deadline, and for the remainder of the season the Lakers play one game against an Eastern Conference opponent, the Nets on April 4th.

I think the Lakers have been out of their groove for the year. Clearly, since the departure of Phil Jasckson, Odom and the Fisher trade, there aren't many offensive plays. This picture that one Pounder graciously posted a few mornings ago sums things up better than I ever could.

New Coach Mike Brown kind of seems content to let Kobe Bryant take most of the shots, no matter what kind of night he's having. He is leading the league in scoring, at 28.1 points per night. Pau Gasol and Bynum handle the post, with Bynum making his first All-Star game this season. If and when the maturity meshes with his numbers...look out. He's already the second best Center in the NBA. A little tutoring from Kareem Abul-Jabbar, and... [shudders].

"Joey, have you ever been in a...in a Turkish prison?"

On the numbers sides of things, the Lake Show is currently 1st in the Pacific Division with a 35 - 22 record. They're 15th overall in points per game, and 2nd in rebounding. Bynum and Gasol will be handful for our guys. Luckily, we've added some height. I'd expect to see Blair, Splitter, Diaw and possibly even Jax for good measure with some extra minutes tonight. This game will be won or lost down low. The Lakers are ninth in assists, and 13th in points allowed. Our Spurs are currently 3rd in points per game, 10th in rebounding, 5th in assists, and 17th in points allowed. Anything can happen, and probably will when Kobe comes to town, but LA is 27th in the NBA in three point percentage, at 31.6%, to our league leading 38.7%. They're also very good from the free throw line, hitting just over 75%, 13th in the league, to our 73.6%, 25th, this week. Something tells me we're gonna need every one of these tonight.

Game Prediction: I predict a close one, down to the wire. Good guys prevail.

As always Tony must dominate Fisher Paul Sessions, and NBA league pass is recommended for those who are willing to pony up the cash. Almost every Spurs game will be broadcast there, which is especially helpful for those of us who aren't in the San Antonio area. Please don't post links to illegal game feeds in the game thread. Links to illegal feeds are not permitted on SBNation, but you can probably find them out there on the internets if you're resourceful and desperate.