The Spurs got their 7th win in a row by defeating the Indiana Pacers while showing the difference between a real championship contender and a very good second-tier team. After a near perfect first half that saw the Spurs get a lead as large as 20 points thanks to crisp ball movement, hot shooting and solid if inconsistent defense, the Spurs relied on their potent offense to manage their lead the rest of the way.

On a battle between really deep teams, the trio of Manu Ginobili, Tony Parker and Tim Duncan made the difference, combining for 59 points, 12 assists and 17 rebounds. The starless Pacers struggled to match the Spurs' consistent offensive production even with 5 players scoring in double digits. George Hill added a solid performance for the visitors on his first game back in San Antonio, with 9 points, 7 rebounds and 6 assists.

The good guys started the game with a lot of energy, no doubt a product of the two days of rest they had, and got an early lead thanks to a nearly flawless performance on different sides of the ball in each of the first two quarters. In the 1st, the Spurs managed to control the boards and limit the balanced Pacers offense to 18 total points by effectively shutting down their guards. Collison, George Hill and Paul George combined for 0 points on only 3 shots in the first 12 minutes. The scoring burden felt to Indiana's front line (and their incumbent star Danny Granger) to keep the game close. While David West struggled from the field (1-4) Roy Hibbert and Tyler Hansbrough did the damage with some nifty post moves and mid range jump shots, respectively. For the Spurs, Tim Duncan was aggressive right out of the gate, as Rested Timmy is wont to do, and forced the issue inside, scoring on a pretty turnaround bank shot over Amudson after getting himself a couple trips to the line. Solid defense and rebounding, Duncan's 6 points, and timely contributions from the bench were enough to give the Spurs a 7 point advantage at the end of the first.

The beginning of the second quarter showed just how dangerous this Spurs team can be when they are hitting from deep. The Spurs went 5-6 from beyond the arc in the quarter with Jackson, Neal, Ginobili and Leonard hitting treys. Jackson in particular was important during the start of the 2nd quarter run, hitting a long jumper along with his 3 to get the team going. The Spurs' ball movement was fantastic during the period with everyone contributing to what ended up being the team's highest scoring quarter of the season with 39 points and a max lead of 20. With the game seemingly under control, the Spurs took their collective foot off the pedal and the Pacers, led by Paul George's 11 second quarter points and Hill's solid contributions in all facets of the game, seized the moment and took advantage of four San Antonio turnovers to create fast break points and reduce the lead to 16 going into halftime.

On the second half, the visitors tightened up the screws on defense while the Spurs became more lax on that side of the ball. The lack of defensive intensity and execution allowed a very good Pacers team to shoot over 70% of their shots in the 3rd quarter and close the gap to 7 but like has been the case the entire season, the Spurs' offense seemed to always have a response to Indiana's runs, relying on a combination of their three stars and solid role players to maintain and extend their lead whenever it was threatened. Danny Granger came alive in the 4th quarter, going on an 11 point scoring binge that ultimately proved not to be enough to give his team the win.

It was the classic example of a veteran contender holding a younger, up-and-coming team at bay and collecting a home win without going all out. The dominance the Spurs showed in the first half made it look like it could have been a blowout, but complacency and a very solid and deep Pacers team prevented the Spurs from getting a more comfortable win in which to rest their stars. Duncan's 32 minutes and Parker's 35 are probably more than Pop was hoping for after the first two quarters, but a win over one of the top teams in the East is nothing to sneeze at, no matter how much your nose was tickled by the Spurs' inability to put the Pacers away.

The victory over Indianapolis moves the Spurs to 36-14 for the year, solidifying the team's place as the second seed in the Western Conference and extending the Spurs' streak to 7 entering the last month of the regular season. 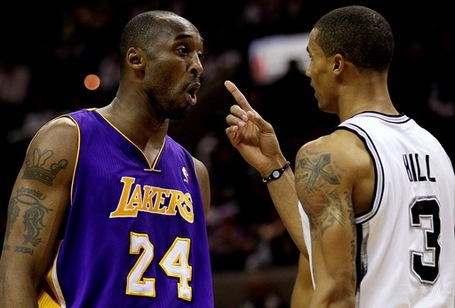 We'll always have this moment, Georgie.

Let's take a minute to talk about George Hill

George Hill had a solid game, contributing in a variety of ways, but since most of you know that from having watched the game, I'll focus instead on how I feel about Georgie.

Why does George Hill have a place in out hearts? After all, he was with the team just 3 seasons and didn't win a ring or anything. My best guess? We love George Hill because George Hill is the Spurs. Hill was an unheralded player from a small school. When he was given the chance to shine he seized it but he never took the opportunity for granted. He accepted his role, even if he new that the attention and the big bucks were elsewhere. He worked hard on his game. He was a high character guy both on and off the court. He backed down to no one, as the above photo shows. Humility, character, dedication and a chip on his shoulder when facing situations he had been told he was not good enough to be in--is there anything more like the Spurs than that?

The other thing I can't help but feel when I see Hill in another jersey is that he didn't deserve it. He wanted to stay and did everything that was asked of him and yet he was dealt. The trade was the right move for the Spurs and Kawhi has the potential to be something really special, but it just feels unfair that Hill, a guy that loved the Spurs and worked hard for his spot, was the one that had to go for Kawhi to be with us. Alas, life is unfair, the NBA is a business and like Snoop said, deserve got nothing to do with it. I hope he has a great and long career and I'd be thrilled to see him donning the Silver and Black again. I'm just glad that, having to be dealt, he was able to land back in Indiana, his home.

A really efficient game for Manu, except for the couple turnovers, but the 5 assists make up for that. Manu came into this game sporting a .440 3pt% (way above his career average) and hit 2-4 from deep on this one. You'd think he'll have to come back to Earth eventually, but it's easy to enjoy for now.

TP started a little slow today, letting others do the heavy lifting, but when the Pacers got close in the 3rd he responded with 8 points to hold them off. He edges out Manu for the second spot because he really outplayed his counterpart in this one.

Timmy keeps playing fantastic basketball. The biggest difference between this year's team and last season's is not depth, but the stars playing at a stellar level. First it was Manu to start the season, then Tony picked up the cape and started putting up MVP-level numbers. In between, Tim started (quietly of course) raising his game. When he's rested he's definitely one of the top 5 two-way bigs in the league, even at his age.

Up next, at Cleveland against the Cavaliers on Tuesday for a FIGABABA, before traveling to Boston for the dreaded SEGABABA.